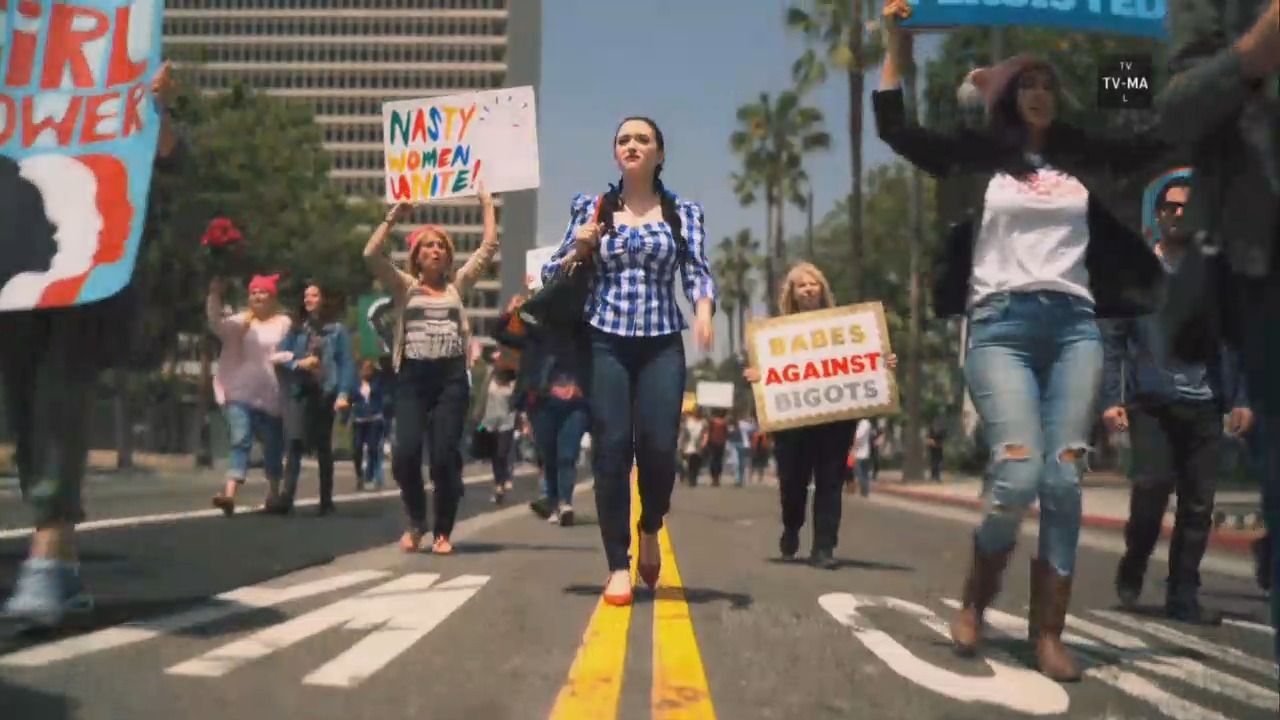 There seems to be a trend lately on Netflix, Hulu, et al. Just when you think it’s safe to go into the water and really enjoy a series because there have been no mentions of politics, the liberal political agenda shark suddenly appears and takes a bite right near the end.

Such was the case with Hulu’s new quirky comedy Dollface, released November 15, which went from cute and funny to political and annoying in the ninth episode, where the main characters attend the Women’s March and malign counter-protesters as insane sexists, bigots and Nazis. This was especially ironic given that the leaders of the Women’s March have had ongoing issues with anti-Semitism.

Dollface is about a woman named Jules (Kat Dennings) whose fiancé has broken up with her, leaving her to realize she no longer has any female friendships because she failed to nourish them while spending all of her time with her ex before they broke up.

Jules makes it her mission to mend those friendships with a strong cast playing the roles of her girlfriends Madison (Brenda Song), Stella (Shay Mitchell) and Izzy (Esther Povitsky). Throughout the show, Jules has whimsical and offbeat fantasies that added to the show’s humor. Except in episode 9, “Feminist,” the fantasy isn’t very funny.

Jules gets knocked over by a flag blowing in the brisk wind and falls to the ground, hitting her head. Up to this point, the episode was in black and white and was an obvious homage to The Wizard of Oz, which ends up being the theme of the entire episode. When she wakes up, the show is in color and Jules finds herself at the Women’s March where women are chanting “My country, my choice. My body, my voice" and holding signs that say “Pussy power,” “Bitches get shit done,” and “You haven’t seen nasty yet.”

Jules ends up meeting her friends along the way, who resemble the scarecrow, lion and tin man. Izzy is the last friend to be found, who, because she resembles the cowardly lion, is found having a panic attack in a port-a-potty because she couldn’t find her friends and because she had been yelled at by “insane counter-protestors.”

Jules: Here you guys are. What’s going on?

Bystander: We’ve all been waiting to pee for a half an hour. Some freak show locked herself in there, and this is the only bathroom for blocks. Hurry up, already!

Izzy: You don’t know me! I might have irritable bowel syndrome!

Jules: Wait, Izzy, is that you?

Izzy: I’m having a panic attack.

Izzy: I can’t. I can’t come out there. I can’t face everyone. I can’t. Wait, have you guys been together this whole time? Are you taking pictures without me? Could we get one with me in it? I need to be in one quick.

Jules: Okay, what is going on? Why are you freaking out?

Izzy: I was alone. Jules ran out of the meeting so quickly this morning that I had to come down here by myself and I couldn’t find any of you guys, and there were these insane counter-protesters screaming at me.

Stella: Were they sexist?

Earlier in show, Jules asked, “Being a feminist means I’m supposed to be supportive of all women, right?” Yes, yes it does. Which is why the Women’s March should have included all women, including conservatives, Christians and pro-lifers. But then it wouldn’t have been the foul, far-left, propaganda-fest that it turned out to be, led by women who are anti-Semites and whose replacements still had ties to anti-Semitism. Which is why there were so many counter-protesters.