Well, folks, it looks like it’s just open season for racism towards white people when it comes to the heavily racial -ish comedy franchise. New week, new hateful quotes about white people. You can almost bet on it now.

Tuesday’s episode of mixed-ish, “My Prerogative,” was just a running slew of racial hate and division. And it started right from the opening, in which Adult Bow (Tracee Ellis Ross) gives a commentary on a scene from her childhood that seems to start off well, but ends very badly:

Adult Bow (Voiceover): When you're mixed, you get front-row seats to two completely different cultures. That's why I know what icing is in hockey, and it's also why we sang the Black National Anthem before every game.

Family: Let us March on 'til victory is woooon.

Adult Bow: Back then, it really felt like there were two Americas. Magic versus Bird. Oprah versus Donahue. And every episode of "Family Feud.” But in our house, we found a way to bridge those worlds, to stay united as one mixed family.

Denise: Great news. I was talking to your neighbor, Vivica. And after she got through yelling at me for blocking her driveway, she suggested we all have a Spades night.

Denise: I know. I got so excited, I had to come in here and not move my car.

Paul: Well, that sounds like fun. What night are we playing?

Adult Bow: My dad was about to realize when it comes to Spades, there were still two Americas, and he needed to stay in his.

Denise: Do you want to tell him, or do I get to? Please let me tell him. I love disappointing white people.

So, Spades is supposed to be some special, racially-sacred game, but this is apparently the first time it's come up in their 16 years of marriage, as well as the first time they've played it in all that time? Right.

Paul (Mark-Paul Gosselaar) ends up learning to play the game so he can surprise his wife Alicia (Tika Sumpter) and join her for Spades night with their black neighbors and friends. Alicia likes the idea and defends his involvement to her hateful sister Denise (Christina Anthony), who warns that he’s going to “ruin everything.” 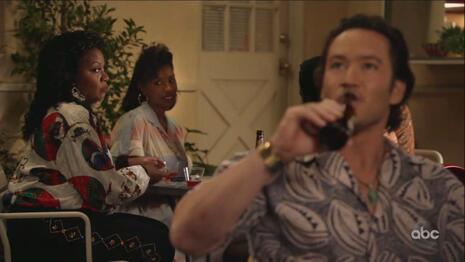 “You know at the Apollo when they bring out the white guy to sing gospel but we can't boo him because he's singing about God,” she explains. “And then he's not as bad as you thought, but you still rather would have seen a black person... because it's the Apollo!”

Alicia disagrees with Denise, telling her, “Once we start playing cards, no one's gonna see the difference. The only color that matters in Spades is black and red.” Denise warns her, “Well, I told you so. I'mma say it now so I don't have to say it later. Well, I'll probably say it later, too.” Yes, Denise, you probably will.

Of course, the show makes sure Denise is right by having Paul look like a try-hard who ends up apologizing for white people who he says sarcastically are “something special:”

Alicia: This morning, a judge talked to me like it was my first day.

Vivica: You know they don't like seeing us on top.

Alicia: Uh, tell me about it.

Vivica: You know, Alicia, I had one of those days, too. One of my students' parents mistook me for the lunch lady. What? I am a teacher. A teacher.

Paul: Come on, girl. They don't pay you enough to deal with that kind of crap.

George: You should've told her, "You look more like a lunch lady than me, with your bifocals and your chin hair."

Paul: My man. My man. Preach! Preach. Oh, Lord. Lord. Oh. White people are something special. Listen, I just wanted to apologize to all of you on behalf of all of us.

Alicia: Baby, you don't need to do that.

Paul: Baby, someone needs to. Am I right, George? He's saying it right there. I know. To equality.

Alicia: Here's to being equal.

Denise: I can't lie. Paul was better at Spades than I thought he would be.

Alicia: Yeah, he's really good. We won all night and everybody loved playing with him.

Alicia: But he still somehow ruined things. As soon as you said the phone voice thing, I couldn't stop hearing it.

Denise: I know, right? It's like people were trying to cash a check with no id. Some things are just for us.

Denise: Girl, you know. They can't help themselves. They take our stuff and make it their own. They did it to the blues, they did it to jazz, then they did it to rock and roll. But now we have hip-hop. And God as my witness, they will never take that from us.

Denise: But apparently they gonna try.

Alicia: Okay, shut it down.

Of course, Paul being white and all, can’t figure out why Alicia is mad at him. So, Denise takes the opportunity to set him straight in a speech that sounds a lot like a pro-segregation argument:

Denise: Here’s the thing. You can't help it, but when you come around, it changes everything. You didn't notice how folks rolled out the white carpet as soon as you got here?

Denise: It's something that happens when white people make the effort to come into black spaces. I hate to admit it, but it's so rare, we get excited and try to make you feel as comfortable as possible.

Paul: But I thought they were just being polite.

Denise: People stood around and chanted "Go, white boy" while you danced. You think you that good at the Running Man, we wanna just watch you?

Paul: I mean, when you put it that way, w-while making that face...

Denise: Look, don't take it personal, but sometimes we need some things that are just for us.

Paul: But Alicia and I do everything together. And this black/white separation you're talking about is everything we fought against. Can you imagine if I said to my wife, "Uh, sorry, honey, but you can't come into my white space?"

Denise: Yeah, but Paul, part of "being down" is understanding that every space that exists is already a "white space." And when we come into your spaces, we don't get nearly the same treatment that you get when you come into ours. That's what makes things like our Spades game so precious.

Denise: What you asking me for? She your wife! Do black people have to do everything for you?

Ahh, yes, it’s quite obvious that Denise, and the -ish franchise in general, loves to “disappoint white people,” who they obviously have tremendous disdain for. Very disappointing indeed.

Conservatives Fight Back! This episode of mixed-ish was sponsored by AT&T and Nissan. Click each advertiser for their contact information so that you can let them know how you feel about this episode!