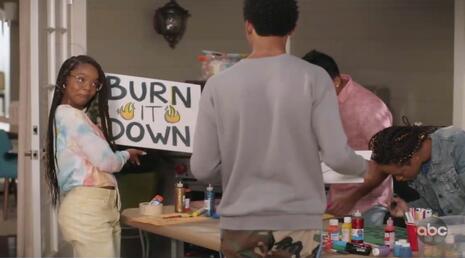 As if we haven’t been hit over the head enough with the liberal lectures on ABC’s highly racial comedy black-ish, Wednesday’s episode delivered another Black Lives Matter storyline, complete with its usual hateful language towards white people. And despite the show’s main character praising his daughter for having “the right idea” when she made a protest sign that read, “Burn It Down,” the show blamed “barista-looking,” “oat-milk-ass-looking white dude(s)” for violence erupting at a BLM protest.

The episode opens with Junior (Marcus Scribner) sharing a video on his Instagram as he wears his grandfather’s t-shirt from the '80s that says, “F*ck the Police,” which he reads aloud for his followers.

His father, Dre (Anthony Anderson), is unimpressed with his son's actions, arguing that nobody cares what Junior has to say on the Internet, and that “stuntin’ on the gram” doesn’t count as activism. He points out that when he was Junior’s age, “Whenever I made a statement, I didn't get likes, I got smacked upside the head. My ass was on the line.”

When Dre gets home from work, he finds Junior making another video with his girlfriend Olivia (Katlyn Nichol). We also get to see his daughter Diane (Marsai Martin) making signs to hang up at her school, and as she proudly displays hers to her friend, we see drawings of flames with the words, “Burn it Down,” after Dre’s voice over proclaims that she has “the right idea:”

Junior: We have to defund the police. Then you can release the pressure from my neck and put some respect on my name. Give us, us free, justice and liberty.

Olivia: Junior, that was amazing.

Dre: What the hell was that?

Junior: Oh, hey, Dad, you want to check out the video that we made about defunding the police?

Dre: Okay, listen, Junior Van Peebles, alright. Do you know how dumb you sound saying, "Defund the police" in your mom's beret?

Junior: Okay, there is nothing stupid about getting the word out. I'm doing the same thing as a lot of other activists.

Olivia: Mr. Johnson, this is what getting involved looks like. It is not just African medallions and high-top fades anymore.

Dre: And what are your goals? And how much can you really trust social media? Instagram is for White women posting their booty gains, not for starting a revolution.

Junior: The revolution has to start somewhere.

Dre: A revolution can't start unless you have people on your side. "Fight the power" was a clear message. "Defund the police," what does that even mean?

Dre: Okay, okay. I'll ride with all of that, but you have to sell it to the people in a way that doesn't scare them. Like when fast-food restaurants introduce salads, they don't say they're, "Defunding the hamburger."

Junior: Okay, did you just compare police violence to hamburgers?

Dre: They both kill Black people!

Junior: Dad, you are getting too hung up on the words. We are trying to change things so that people don't get shot for running stop signs. And freeing up some of the police budget would mean that some of the potholes you always complain about would get filled.

Dre: So, you think your silly little rhymes are gonna fix the streets? Hmm? What are you gonna fill those potholes with? Retweets? Son, if you want to fight the power, you gotta get your hands dirty.

Junior: Look, Dad, we get it. Back in your day, you watched a lot of Spike Lee movies and everybody was sweaty. You had your ways, and we have ours. Okay. C'mon, Liv. Let's go re-do it. My face looked a little weird in that last one. Let's do it in front of that bush that looks like the background of the Obama portrait.

Dre: Just as Junior and his beret threatened the very sanctity of activism, others in the Johnson gang seemed to have the right idea.

Diane: Alright, I think this gets my point across.

When Dre tries to complain to his wife Bow (Tracee Ellis Ross) about their son’s “inactivism,” he’s surprised to find out she supports Junior’s method of protest. “Online activism works,” she tells Dre. “It has brought attention to police brutality in a way that we've never seen before. It's toppled dictators. Ended Roseanne's career. You should be proud of your son.”

Dre points out that he “occupied a building” at his alma mater Howard University. “Junior is occupying my couch,” he argues. “Bow, protest without some sort of sacrifice is just words. Ali, he lost the prime of his career. King lost his life. And what did the black squares that everyone was posting do? Nothing. You want to know why, Bow? Because it was just a gesture. And that's exactly what our son is -- a black square.”

Dre tells Junior he was able to get the advertising agency they work for to come up with a campaign to provide pro bono ad services for black-owned businesses as a way to teach him about effective methods of protesting. “Do you know how much that's gonna help us keep black dollars in black pockets?” Dre asks him. Junior responds, “I think you're confusing black capitalism with black activism.”

Olivia later praises Junior about his efforts, telling him, “Look, Junior, your tweet about indigenous victims of police brutality has been retweeted thousands of times. People are engaged.”

Determined to convince Junior that social media isn’t the proper way to protest, Dre then decides to take him to a protest happening in their area, but things don’t go as he thought they would. This is when Dre blames Antifa-sounding "white dudes" for the violence and vandalism that takes place:

Dre: So... Let's go, "Black Lives Matter." C'mon, "Say her name." We are taking this back to 1993. Let's do this like Brutus 'cause we ain't new to this. Come on! Let's go! Fight the power, boy! Would "The Man" take time from work and head downtown to march for the rights of others? I don't think so. Dre Johnson has always been down for the cause.

Dre (after the protest): Bow, babe, I can't begin to tell you how great it felt to be out there today. Look, it was like the old days. You know, I think I might perm my hair so I can be the next Al Sharpton. No, or do you think I should get a press and curl like DJ Quik? Ah, don't worry about it. I'll figure it out on the day.

Bow: Well, I'm really glad that you found your passion, Dre. Obviously, your place is in the streets.

Dre: Maybe, but hey. I got to tell you something. The streets done changed. You know what? Everything was going fine until these barista-looking white dudes showed up. And that's when the police in riot gear stepped to the front...While the cops with guns surrounded us. And then this cold-brew, oat-milk-ass-looking white dude threw his mountain bike through the window! It was like the last scenes of the "Joker," alright. And I saw this dude approaching a cop car with a lit newspaper. That's when I got the hell up out of there.

Dre: Yes, it was, babe. And that's when I realized I'm a daytime protestor.

Dre then realizes he accidentally left Junior behind in his rush to flee the scene, but Junior arrives home safely, and he ends up understanding his dad’s view on protesting. We then see a montage of scenes from Black Lives Matter protests set to a song about a black man begging God to protect him because he just wants to live:

Junior: Tonight was something else. Being in a crowd of thousands of all ages, of all races with different backgrounds with one common goal, it was so powerful.

Dre: Okay, son. You do know I felt that way before, too. You know, the truth is, you guys are moving a little fast for me. But just know the work I've done is just as important as the work you'll do. You know, we'll never make real progress unless we work together.

Junior: You're right. You know, Dad, I've been thinking about what you want to do with black-owned businesses, and I think it's a great idea.

Junior: You know, Dad, not only did you miss the real turn-up by leaving, you also missed some pretty unbelievable moments.

Dre: Wow. Wow, what you got there?

♪Doing all that I can

♪Just stay right by my side

If real-life BLM protests didn’t lead to riots, fires, looting and even shootings that have claimed black lives (lives that the group has shown no concern for such as David Dorn), and if BLM didn’t lump all cops together as evil racists or say “ACAB” (All Cops Are Bastards), perhaps all viewers of this episode would have been moved by the emotional montage. But as long as the socialist, extremist group prevents police officers from being able to defend themselves and the public when faced with life-threatening situations with black offenders, those of us who value *all* black lives, even the ones that are politically inconvenient to BLM, will see it for what it is - just more disturbing political propaganda from the Hollywood left.

Conservatives Fight Back: This episode of Black-ish was sponsored in part by State Farm, Subaru, and Walmart, let them know you don't appreciate their support of a show that wants to "Burn It Down!"