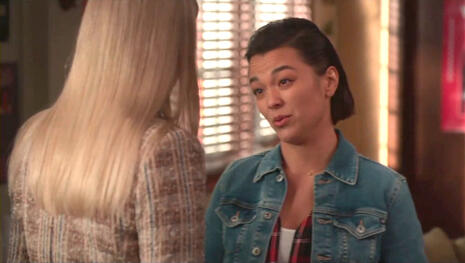 In its first week, Mindy Kaling’s new streaming HBO Max comedy The Sex Lives of College Girls went overboard on woke virtue signaling and liberal name-dropping. On Thanksgiving Day, three more episodes were released and, in one episode, the spotlight was on woke feminists - specifically, defending their use of pronouns and safe spaces.

The show centers around four freshman college girls who share a dorm together at prestigious Essex College in New England. Leighton (Renee Rap) is the mean girl who was previously called the Melania of the group and is a closeted lesbian. In episode 3, “Le Tuteur,” she’s doing community service at the school’s Women’s Center because she was caught drinking and vandalizing school property.

As she introduces herself at the center, she stirs up trouble by not falling in line with the use of pronouns and a “safe space” bell. Their over-sensitivity comes off as ridiculous and comical to normal viewers, but Leighton’s put in her place by the leader, Alicia (Midori Francis), because it "really does help people" and disrespecting the sharing of pronouns “makes you suck” and “sound like a really dumb, cis bitch:”

Ginger: I love that Susan B. Anthony is being honored in the Essex Portrait Gallery. I'm just saying, the artist clearly enhanced the size of her breasts.

Lindsay: Maybe it's symbolic of her female power.

Tova: Or maybe she actually had a huge rack. How would we know?

Leighton: Hey. I'm Leighton. I got caught underage drinking. That's why I have to work here.

Lindsay: Lindsay. She, her, hers.

Alicia: Alicia. She, her, hers.

Tova: Tova. They, them, theirs.

Alicia: Cool. I oversee all the volunteers.

Leighton: Oh, great. Should we talk scheduling? Um, I was thinking that I would work mornings from 9:30 to 10:15-ish, and then, you know, round that up to an hour, for timesheet purposes.

Alicia: Yeah, that's not how this works. I'll tell you when we need help, and that's when you'll be here. Like tomorrow from 5:00 to 10:00, you'll be helping with our feminist poetry group.

Leighton: As tempting as that sounds, I'm kind of busy on Fridays.

Alicia: Shit, I didn't realize that. Maybe we should just shut down the whole place till you're free.

Leighton: Okay, I am from New York, so I can tell that you're being sarcastic.

Ginger: Hey, this is, uh, getting a little tense. I'm gonna hit the Safe Space Bell.

Ginger: It's a bell that we hit when we think it'd be good to have a safe space.

Leighton: Uh, isn't this already a safe space? [ding] Okay. I'm just saying that maybe we've gotten a little bit too sensitive as a society if even a safe space isn't-- [ding] Oh, my God!

Alicia: It's all good, Ginger. What we do here, whether it seems stupid to you or not, really does help people. So, we're not looking for your feedback at the moment, okay? Oh, and don't say your pronouns are obvious. That makes you suck. Suggesting that you don't have to use your pronouns when other people do makes you sound like a really dumb, cis bitch. [ding] I heard it, Ginger! Welcome to the Women's Center, Leighton. See you at poetry night.

There was also a bit of name-dropping in the new episodes as Kimberly (Pauline Chalamet) raves about Beto O’Rourke’s abs. And when Leighton tells the girls she’s had the “worst day of her life,” Whitney (Alyah Chanelle Scott) mocks her by asking, “Oh my God, did they cancel your reservation at Mar-a-Lago?”

In episode 5, “That Comment Tho,” Leighton tells her brother Nico (Gavin Leatherwood) she’s bringing some of the girls from the center to his frat party. He asks, “Doesn’t the Women’s Center hate frats and want to shut us down?” Leighton replies, “Yes, but everything they know about frats is from the Kavanaugh hearings” and wants to show them it’s “not as bad as they think.”

We’re only halfway through the season, so there’s still plenty of time for more woke virtue signaling, unfortunately.