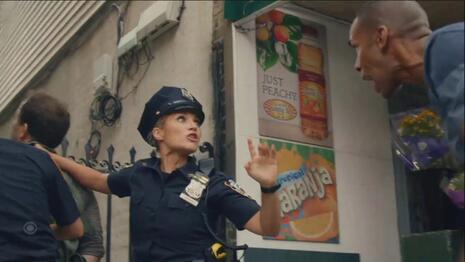 In the midst of endless liberal BLM propaganda constantly pouring out of Hollywood, there’s thankfully a bright beacon of hope shining from CBS’s NYPD police drama Blue Bloods, which isn’t afraid to persist in defying Hollywood standards and telling it like it is. Friday’s season premiere episode “Hate Is Hate” was no exception and was a welcome change of pace as the show illuminated the fallout from the Black Lives Matter movement, namely a rise in hate, crime, and the increasingly hostile and volatile situations police are put in as they courageously continue to keep us safe.

The episode opens with several different crimes scenes unfolding all over the city, one of which has dire consequences for Officer Rachel Witten (Lauren Patten) who was forced to draw her weapon on a man who assaulted her from behind as onlookers recorded the scene and harassed the officers:

Criminal: Give me the cigarettes, you stupid bitch.

Cashier: Come back when you can pay.

Cashier: Stop! Get out of here!

Criminal: You stop! I want my cigarettes right now!

Bystander: Police, come quick! There's a man in there and he's going crazy.

Witten: Police! Police. Back away. Up against the wall.

Eddie: Sir, you're under arrest.

Criminal: Help me! Get 'em off me!

Witten: Hey! Get back.

Jamie: Up against the pole. Back up! Step aside. Make some space. You got him?

Eddie: Yeah. Put your hands behind your back and stop fighting.

Witten ends up under investigation after an anonymous witness claims she “menaced (the suspect) with her weapon for no reason.” The police captain clearly does not have her back, saying it’s only harassment, not assault, because she doesn’t have any physical injuries. He tells her she’s “modified,” meaning she must hand over her gun and badge pending the results of the investigation.

The captain later reveals he’s being pressured by public opinion when he tells Witten’s superior, Sergeant Jamie Reagan (Will Estes), “Now there's a video of a cop holding a gun on a bunch of unarmed bystanders. We cannot have that.” Jamie defends her, “You get hit from behind, you pull your weapon because you got no idea what's coming next,” and tells the captain he should be standing up for his officers. This is likely yet another negative consequence happening in real police departments across the country thanks to the BLM agenda.

Witten’s partner Eddie (Vanessa Ray) checks on Witten at her home and Witten says the situation “feels like a public humiliation.” Eddie tells her encouragingly that everything will go back to normal once the investigation is over, but Witten asks, “People will stop looking at us like we're the enemy?” She continues, “I was at the gym yesterday, and there was a guy there wearing a shirt that said, ‘Blue Lives Murder.’” She tells Eddie she’s second guessing ever becoming a police officer, and the moment Eddie leaves, Witten’s brave face gives way to a waterfall of tears.

Meanwhile, police commissioner Frank Reagan (Tom Selleck) meets with Mayor Peter Chase (Dylan Walsh) to discuss a comment Frank made in a joint press conference on the surge in crimes. Frank told the press that he’s doing the best job he can with his hands tied behind his back, implying that the blame can be put on liberal, anti-police measures:

Mayor: And hands tied behind your back? What the hell?

Frank: What the hell? You took away anti-crime, you cut my numbers in the field and in the budget.

Frank: And we do, every day.

Mayor: So, it's my fault some crazy person fired into a busload of teenagers? That a kid got shot at a playground. That's on me?

Frank: Mr. Mayor, there is a reason crime is rising, and pretending it isn't won't make it go away.

Mayor: What are you trying to do here, Frank? We're just getting back on our feet, and you want to scare away tourists ranting about more crime, more guns. Your job out there was to answer questions. Not to supply reporters with headlines.

Frank: What happened to you, Pete? You were the law-and-order mayor. You were the guy I used to have to hold back.

Mayor: You know what, Frank? I've got a city on its knees. My hands are tied just the same as yours.

Frank: Mr. Mayor, call out what's happening. You and me, together.

Mayor: I need people to feel safe in this city.

Frank: No. You need people to be safe in this city.

At the Reagan’s weekly Sunday dinner, the family discusses the difficulties of working in law enforcement as hatred towards officers increases along with crime. We also learn that Frank’s been shut out by the mayor for speaking the truth to the press:

Henry: I'm sure glad they got that school bus shooter.

Jamie: Yeah, there's something about crimes against kids.

Danny: Tell me about it. I got a vic who's a five-year-old.

Frank: Any closer to the arrest?

Henry: That's what really gets to me: The murder of the innocents.

Frank: All crimes are hate crimes. No such thing as a love crime.

Erin: I noticed the mayor held a press conference for the school bus shooting arrest on his own. How come you weren't there?

Frank: You have to ask him.

Sean: Does that mean that the mayor is pissed at you?

Henry: That's exactly what it means. Good for Francis.

Jamie: He should spend a night in a radio car answering calls.

Danny: Or in an ER with a vic's family.

Eddie: Have any of you ever thought about leaving the department?

Danny: What do you mean?

Eddie: Well, the job gets to you. A case gets to you so much you feel like packing it in.

Danny: Yeah. Wait a minute, you don't get to answer that one.

Erin: What? It's not the job, but it's a job that can grind you down. This week in particular I thought a lot about how nice it would be not to be an A.D.A.

Henry: You thinking of a new career, Eddie?

Eddie: I think Witten is. She feels like nobody is on her side.

Danny: Well, that's 'cause nobody is.

Frank: And it's not just cops. It's like get in line.

Jack: It feels like every week there's some random person getting attacked on the streets for no reason.

Henry: And you wonder why he wasn't invited to the press conference?

Sean: How do you get people to just stop hating?

Danny: Well, mostly, you talk, and we just sit around and listen.

At the end of the episode, Eddie delivers powerful arguments to Witten’s investigators that I’m sure were an encouragement to real officers everywhere who continue to be heroes despite the hatred shown toward them because of the BLM agenda. After Eddie’s meeting, Frank gets together with the mayor again, and Frank does what Frank does best- speak truth to liberal lies boldly and unapologetically:

Eddie: He hit her. The crowd started taunting, and they were calling us murderers.

Man: You do know you're here as a witness?

Eddie: I know why I'm here.

Man: So, there's no reason to be defensive.

Eddie: If I don't defend my partner, who will?

Woman: We're not here to prosecute her.

Eddie: The truth? She's a great cop who's being raked over the coals for no reason.

Man: She pulled her weapon on an unarmed man.

Man: And showed no visible injuries.

Eddie: Why don't I tell you about the invisible injuries? You want to hear about those?

Woman: How about you just answer our questions?

Eddie: Why does it feel like she is being presumed guilty until proven innocent? Isn't it supposed to be the other way around?

Man: We haven't made a final determination.

Man: Are you done? Can we get on with the questions now?

Eddie: What do you got?

Mayor: I promised the community a bigger police presence.

Frank: I know. I watched the press conference. Gonna be tough to make good on that with less police and less money.

Mayor: I'm not discussing rolling back policies with you. Right now, my job is to get the city back up to speed.

Frank: The victim's parents will be thrilled to hear that.

Frank: And there is going to be more of it if you don't work with me.

Mayor: "Work with you" translates to lift all the restrictions on your department. Reinstate anti-crime, hire more cops.

Mayor: Answer's no. Let's move on. I heard you have an arrest in that other shooting.

Mayor: That's great. We should announce it this afternoon.

Frank: You can announce it. I don't need to be there.

Mayor: You'll be there.

Frank: I am not going to stand next to you and pretend your policies are working when they are not.

Mayor: Yeah, policies, plural. And some of mine are working damn well. And yes, there's gonna be some less-than-ideal impact in other areas, and that's called governing in the real world. Me wanting to grow back our economy isn't what's causing your crime wave, Frank.

Mayor: It is your department.

Frank: Well, at least you got that right.

Thank God Blue Bloods has the courage to speak truth about the consequences this country is experiencing from BLM fallout, especially since the rest of Hollywood continues to virtue signal and race-bait with empty BLM platitudes and lecturing which only worsens the divisions, crime and hate.

Take a moment to be part of the solution by contacting the advertisers and thank them for supporting the truth: Geico, Wayfair, Crest, Giant, and Walmart.