CBS's 'Blue Bloods' Pushes Back Against Anti-Cop, 'All Cops Are Bastards' Hatred 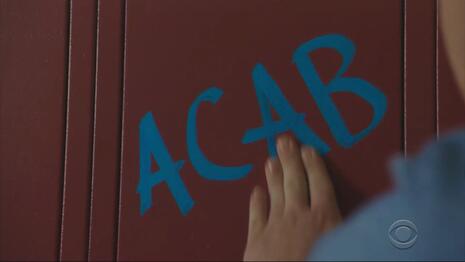 Leave it to CBS’s excellent hit cop drama Blue Bloods to confront anti-police sentiment head-on and depict how it affects not only officers, but their families, as well. Especially their children, as was the case in Friday’s episode, “Spilling Secrets,” as Sean (Andrew Terraciano), son of Officer Danny Reagan (Donnie Wahlberg) who also has many other NYPD officers and officials in his family, finds the vile acronym “ACAB” (which stands for “All Cops Are Bastards”) written on his high school locker.

As Sean is walking out of class with his friend Jennifer (Sophia Gennusa), he makes the unexpected and unpleasant find as they approach his locker:

Jennifer: This homework is gonna kill me. "Foldable cell membrane"?

Sean: Are you kidding?

Jennifer: It's so boring.

Sean: No, I was actually kind of hoping that you would explain it to me.

Jennifer: Shut up, you're smart. So maybe we could hang out later and you could help me?

Sean: Son of a bitch.

Jennifer: What does "ACAB" mean?

Sean: "All cops are bastards."

Sean: Yeah, it's-it's a thing. Maybe the janitor has something that will clean it off.

Sean’s father Danny gets a call from Sean’s school telling him what happened with the ACAB incident. Danny then confronts Sean about it.

Sean tries to avoid the discussion and claims it was “no big deal.” "All your family members being referred to as 'bastard' is not a big deal to you?” Danny asks. Sean explains that if he ignores the bullies and doesn’t take the bait that they’ll just go away. Danny points out it might not just be “some troll,” and suggests that a history teacher at his school might be to blame. “The certified cop hater who was a cop hater long before it became everyone's favorite hobby to hate cops,” Danny explains, and Sean knows exactly who he’s talking about.

Ignoring the problem only ends up making it worse, as Sean discovers the ACAB graffiti inside of his locker after the janitor cleaned the graffiti off the front. Sean then decides to confront the history teacher, Ms. Wilson (Kristine Nielsen), believing she is the likely culprit, but she’s made an interesting about-face in her cop-hating position after witnessing anti-police riots:

Ms. Wilson: Sean Reagan. I know who you are.

Sean: I know you're not exactly the biggest fan of my family.

Ms. Wilson: Is there a question here, Sean?

Sean: Someone wrote "ACAB" all over my locker.

Ms. Wilson: It's a high school.

Sean: Where the main office has everyone's locker combinations on file. And I imagine that the teachers would have access.

Ms. Wilson: All cops are bastards.

Sean: Which you agree with, right?

Ms. Wilson: You're putting words in my mouth.

Sean: They're your words. It's what you teach.

Ms. Wilson: Used to teach. Last summer, looting broke out in my neighborhood. First, I thought, "Yes, oh, the revolution is finally here." And then they... They weren't protesters. I know what a protest looks like. They started torching the cars on my block. And I watched the cops put their lives on the line to stop the violence. I'm not saying they're all angels...

Sean: But they're not all the devil either.

Ms. Wilson: Not that night, not on my block. Sean, it wasn't me who wrote that.

Sean: But someone did. And somehow, they got my locker combination.

Ms. Wilson: Any friends hang out while you open your locker?

Sean: Why do you ask that?

Ms. Wilson: In case you haven't noticed, Sean, the world's turned upside down.

After Sean notices the ACAB writing on Jennifer’s friend’s notebook, he begins to avoid her. Jennifer realizes the change and she goes to his house to ask why. He confronts her about her cop-hating friends, and she breaks down and admits she was afraid she’d lose her friends if she didn’t go along with their plans to deface Sean’s locker. She feels guilty, apologizes, and says she wants to remain friends. Sean said he learned from his police family that everyone makes mistakes. He appears to just need some time to heal but will then be ready to move forward with their friendship again.

Once again, Blue Bloods is a breath of fresh air in an industry that refuses to recognize the humanity of police officers and how they sacrifice their lives to keep us safe. Terms like ACAB obviously affect more than just the officers themselves. It affects their loved ones as well, especially their children. Kudos to Blue Bloods for the courage to depict this side of the story you won’t see anywhere else in Hollywood.