‘All American’ BS: VP Harris, Stacey Abrams Are ‘Saving the Country From Itself’ 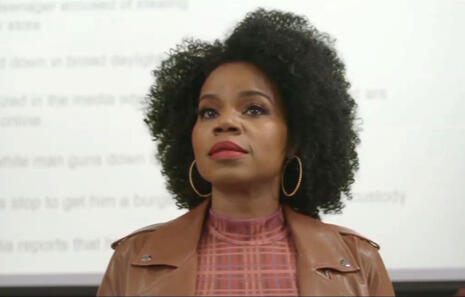 As America’s birthday was celebrated on the 4th of July, The CW’s liberal, racial sports drama All American aired an episode the following day that was racially divisive and celebrated liberal politicians and activists for “saving [America] from itself.” It’s shows like these that separate us rather than bringing us together as citizens of this great, free country, no matter our race.

Monday’s episode, “Homecoming,” took place at a fictional HBCU - Bringston University in Atlanta, GA. Main character Simone (Geffri Maya) is there for the school’s homecoming celebration to decide if she wants to apply there after being rejected by Princeton. Simone’s aunt is a professor at Bringston and we meet her right at the beginning as she tells her class that black journalists are “held to a higher standard,” and have a “larger, unrealistic” burden on them, especially when they’re also activists, which journalists are not actually supposed to be.

One student, Keisha (Netta Walker), even criticizes white reporters and “the views of whiteness” as being the “objective neutral” in journalism, which the professor believes isn’t the same as being “ethical, fair and telling the truth:”

Dr. Patterson: It's just like in any other space. As black journalists, you will be held to a higher standard. There's a larger, unrealistic burden on black journalists. And if you take someone like me, who lies in the intersection of journalism and activism, that burden is even greater.

Olivia: Is that your aunt?

Keisha: So how can you maintain journalistic objectivity?

Keisha: Except, do they? Just because the views of whiteness are normalized to be the objective neutral doesn't mean that they actually are.

Dr. Patterson: All right. Forget about journalistic objectivity, Keisha. I, instead, believe in being ethical, fair, and telling the truth. There's a difference. And as for ethics, my philosophy is if it doesn't cross your line in the sand, there is no shame in walking away. But if it does, you pursue it until you have it right, and then bring it all to the light.

Keisha is serving as an “unofficial ambassador” of the university for Simone and as they (along with Simone’s friend Olivia, played by Samantha Logan) walk around campus, they discuss alumni of HBCUs like Vice President Kamala Harris, failed Georgia gubernatorial candidate Stacey Abrams, and Atlanta Mayor Keisha Lance Bottoms - all of whom Keisha says are “out here saving the country from itself:”

Olivia: Yo, is everyone in Atlanta here this weekend? This is bananas.

Keisha: Girl, HBCUs are hot right now, especially with 3 of our grads out here saving the country from itself.

Keisha: Hey. I like the way you say that.

Simone: Wait. Who's the third one, though?

Later, they tour a part of the school that features plaques with photos and information on notable black people in history such as Marian Wright Edelman, Althea Gibson, and Toni Morrison. Simone talks about their accomplishments then asks why Edelman isn’t in their history books and why Morrison isn’t required reading in their English Lit class.

Simone focuses on Gibson in particular because she wants to be a professional tennis player. When she later practices the game on the school’s courts, she clashes once again with a player on the school’s tennis team, Thea (Camille Hyde). As the two butt heads, Thea starts to give Simone advice because she believes the success of Serena Williams and Naomi Oska (and Althea Gibson and Venus Williams, too, apparently) are somehow just flukes because black women are “being judged on everything” every time they walk onto the court, and she wants to help the sport she loves:

Thea: Just watch your back right foot on your forehand volley. Try stepping forward with your left instead. It'll give you more forward momentum.

Simone: And why are you helping me?

Thea: I'm not. I'm helping the sport I love. See, don't let Serena and Naomi's success fool you. Every time we walk out on that court as black women, we're being judged on everything. You have one job when you play-- bring excellence or don't play at all.

Funny, I thought every athlete is judged when they’re playing their sport and that everyone has that same “one job” of bringing excellence, no matter the color of their skin. #shrug

Simone later raves to her aunt about her experience at Bringston. “It’s amazing to be someplace that's for us, by us, where excellence is expected,” she says.

If anything, the tendency of most colleges and universities to be left-leaning, preaching “woke” liberal talking points to students, and giving preference to minorities make them much more favorable to people of color and those with liberal beliefs.

But shows like All American instead perpetuate a false narrative of victimhood for black people, push these racially divisive storylines, and insert race and racism into places where it doesn’t exist. If we don’t push back, all that this show stands for could indeed become this country’s standard and what’s considered “all American.” See below for ways to help stop that from happening.

Conservatives Fight Back! This episode was sponsored by Dunkin' Donuts, Progressive, and Starbucks. Click each advertiser for their contact information so that you can let them know how you feel about this episode!