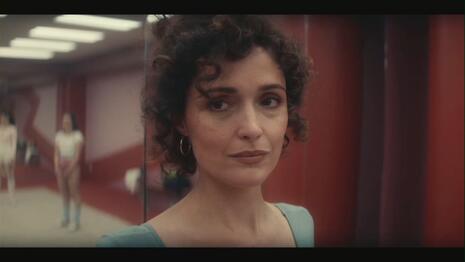 Well, if you’re a liberal Hollywood writer, then hate would be the correct emotion. But if you’re a conservative, and/or someone who enjoyed the prosperity that Reagan created, you might feel differently. Just a hunch. But in the Physical world, the only people who like Reagan are clueless, selfish capitalists.

Physical stars Rose Byrne as Sheila, an unhappy housewife with an eating disorder who speaks cruelly to herself and others in her head. When her husband Danny (Rory Scovel) loses his teaching job, Sheila convinces him to run for office to fight the main enemy on the series - real estate developer John Breem (Paul Sparks). Classism is a huge part of the show as the wealthy are presented as the “bad” people, but to the show’s credit, the hippie, progressive characters on the left are pretty flawed themselves.

The show released three episodes on its debut and the fourth episode was released last Friday. In episode one alone, “Let’s Do This Thing,” there were three mentions of Reagan. One of those digs was delivered by Danny as Sheila urges him to run for office so he can fight Breem’s mall project:

Sheila: And now that awful real estate developer John Breem… He wants every inch of our coastline to have one of his shopping malls on it. And who’s gonna stop him? There’s no one with the vision you have. No one with the brains.

Danny: No one cares about brains in politics anymore. Ronald fucking Reagan was just elected president. I’m gonna have to find a job somewhere.

In episode two, “Let’s Get Political,” Danny has decided to run and he’s reading (while naked, which we’re subjected to seeing from behind) a speech he’s prepared to Sheila in which he takes another swipe at Reagan. “There’s only one thing more powerful than we are,” he reads. “No, it’s not Reagan and his warmongers or Breem and his bulldozers. It’s the ocean.” (Their campaign theme is called “Save Our Wave,” as they claim that Breem’s development will have a harmful impact on the coastline.)

There was a break on Reagan mentions in episode three, thankfully, but that left room for some anti-capitalism sentiment and anti-Christian bigotry. The former came as Sheila walks along the beach campaigning for signatures to support Danny’s election. When she meets an obvious pothead, she tells him enthusiastically, “Say no to capitalist thugs, not drugs!”

The latter happens as John Breem’s son Zeke (Ian Ousley) leads the family in a misguided and selfish prayer, obviously brought about from growing up in a wealthy family. Because of course. John speaks at the end, but this Christian father who is an evil real estate capitalist is also a hypocrite because he is easily distracted by the beautiful Sheila as she walks by the family’s table:

Zeke: Jesus, please bless this food. Let it nourish and strengthen our bodies to help Timothy handle the boys at school who I hope find it in their hearts to love him more. And help our volleyball team crush Ranches Palmas tonight to clinch the Avocado league. And also, to give Mother the energy to inspire the workers to construct her walk-in closet correctly this time. And, of course, give Father the courage and the foresight to keep building a better America where honest, strong, and loving families like ours come first. Amen.

John: Beautiful words, my son. I’m grateful to you for them. And I am grateful for.... for, uhm…

Sheila: What is he even praying for? He already owns everything he lays his eyes on. How much money does one man need?

By episode four, “Let’s Get This Party Started,” the show is back on the Reagan-bashing bandwagon, as Danny’s campaign manager Jerry (Geoffrey Arend) is visiting and hears that Sheila wants to attend an event she and Danny have been invited to at their local country club:

Sheila: Actually, oh, before I forget, Ernie invited us to the Grunion Run party at the Shore Club. He said it would be a really smart way to drum up some support.

Jerry: The Shore Club? Like a country club? That’s not your scene, Dan Man.

Sheila: Yeah, but if we’re talking about raising money…

Jerry: Well, I defer to your hard-earned expertise on country clubs, Sheil. I mean, does this Dinah Shore joint even let Jews in?

Sheila: As of seven years ago, yes.

Danny: You know it could be a good idea. I don’t know. Maybe make a few more high-profile contacts, maybe?

Jerry: Okay. I get it. In Reagan San Diego, you have to kiss some soft, white ass. But word to the wise- don’t try to play by their rules. You won’t win. And I’m not just talking about the election. In your soul, you will feel like a pandering schmuck. You need to hold onto your integrity like it’s the last piece of tail before the firing squad.

Okay, we get it, Physical writers. You don’t like Reagan, Christians, capitalism, or the wealthy. “Let’s Get…” past the political agenda and just deliver the show now, please?