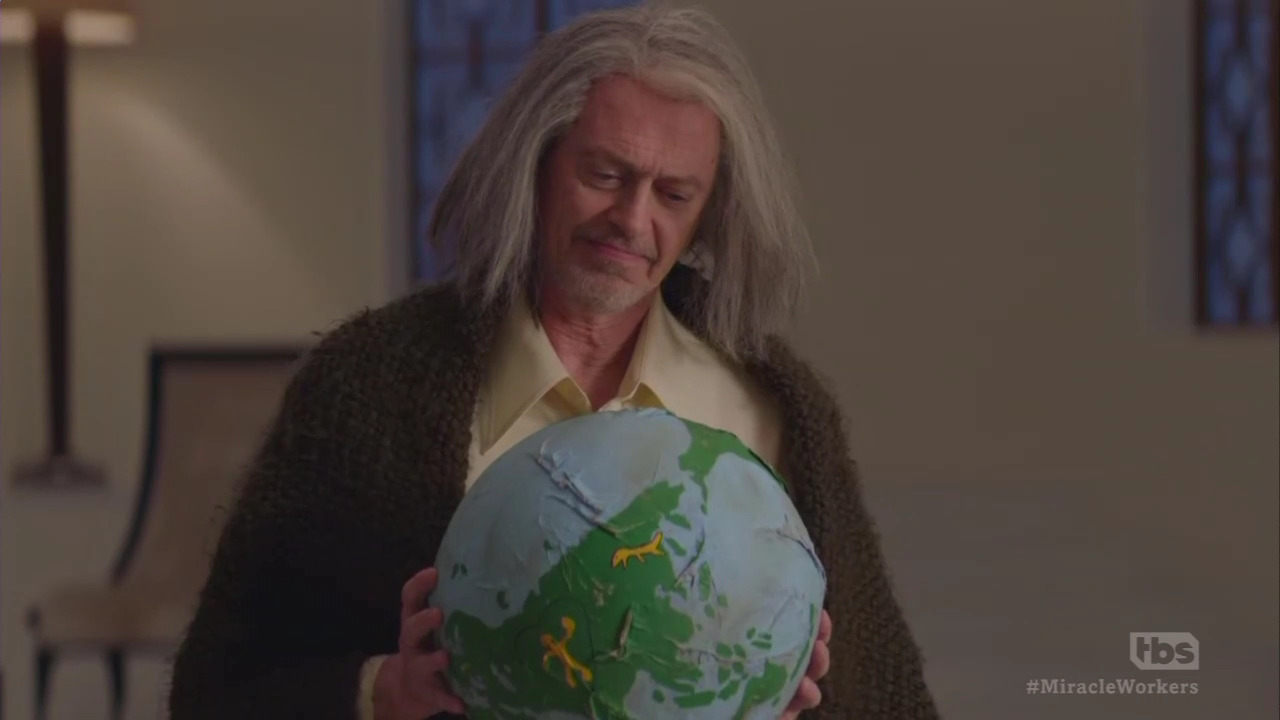 Let’s see. So far, TBS’s Miracle Workers has depicted the Biblical God as lazy and inept, requiring His assistant to wipe Him after using the bathroom and to help Him operate a microwave oven, denigrated Him with dick jokes, and referred to Him as “an illiterate madman,” who lies and swears. You’d think there wouldn’t be much left to use to disparage our Creator, but you’d be wrong.

The final two episodes of the season introduced us to God’s “family” who can barely tolerate Him and condescend to Him as the least successful of three children (no mention of Jesus in this supposed family, though, which is good or bad depending on how you look at it), and we find out that God flunked out of school. By the final episode, God almost ruins the angels’ attempts to save the world from destruction by getting in their way and wreaking havoc with His incompetency, leading one of His angels to call Him an “idiot” and a “moron.”

In the March 19 episode, “1 Day,” God shows up at His parents’ door because He wants to pitch His Lazy Susan restaurant idea in the hopes that they’ll invest. The childish concept involves a lazy river where patrons float around a center filled with food, grabbing what they want with a giant claw.

God’s parents ask His siblings how their planets are doing, and His brother says his planet just celebrated “another million years without war” while His sister brags that her planet is a utopia, “so it kind of runs itself.” No one asks how Earth is doing, so God volunteers the information Himself, saying that things are going well, even though He’s fed up with humans and the planet is set to blow up in one day if He wins a bet He made with one of His angels, Eliza (Geraldine Viswanathan) earlier in the season (Eliza bet that she could get an impossible prayer answered - two random people to kiss - and if she wins, the earth will be saved.)

After dinner is finished, God makes the pitch for His restaurant idea to His parents, but they are rightly shocked at the ridiculous concept:

God: I-I don't get the hesitation, right? You love the concept. And there's hardly any overhead. There's no tables, no waiters, no bathrooms, no walls...

Father: Why aren't there any bathrooms?

God: Well, because it's a lazy river.

Mother: So, people would just...

Mother: Son, I'm not sure this is for us.

Father: It just seems like a very ambitious project, and we're worried...

Mother: That you might not be able to handle it.

God: Whoa. Y-you don't think I can do this? You think I'm not... good enough? You think there's something wrong with me?

Mother: Noooo, sweetie! That's not what we were saying at all!

Father: No. We love the river restaurant.

Father: Yep. Count us in, champ.

Sister: Are you kidding me?

Brother: You're gonna bankroll this?!

Father: He's very passionate about it. It -- It seems unique.

Sister: That's just what you said about the Earth.

God: Okay, wait. This is way different from the Earth.

Brother: Mom, it's not. It's the same thing. Just another water circle with people scrambling for food and shitting everywhere! Look. Remember when he pitched this? It was insane. It makes no sense.

Sister: But we haaaad to be supportive 'cause he's the baby.

Brother: Yeah, let's just forget that he flunked out of school and write him a blank check to start his own planet.

Brother: Yeah, well, you only got one of them to work.

Sister: That's what makes it so sad.

Father: You guys are being too harsh. How bad can Turd possibly be?

God’s father thinks planet Earth is called “Turd” and that’s why he keeps calling it that by mistake. So, we can add potty humor to the dick jokes now. His brother then insists that God explain to His parents what their blank check investment actually paid for when He created Earth and “forgot to build the middle.”

God: I don't want to do this anymore.

Brother: Tell Mom and Dad what a cow is.

God: It's like a big dog you can drink from.

Mother: And what's a dog?

God: A small cow you can be friends with.

Brother: Tell them about giraffes. What's a giraffe?

God: Tall dog with a leg for a neck.

Mother: What is going on? What is happening?

Father: Are these real animals? You made all these things? This is what you did with the four grand we gave you?!

God: T-t-that's it. I'm done. I-I'm not talking about this anymore.

God: Oh, come on, Ricky. Just stop it! You made your point.

Brother: These creatures live on his planet.

Sister: But only on the surface, because he forgot to build the middle. So, the inside is just fire.

Brother: Anyway, these humans are born nude -- like, fully naked. He gave them no instructions, and they just do whatever they want.

Mother: What do you mean?

Brother: He gave them free will.

Mother: Son, is this true?

Father: Why would you do that?

God: I thought it would make them happy. I thought, with all that freedom, they -- they could do great things. Instead, they -- they just mostly ended up... like me. It was supposed to be better.

Get it? The writers know enough about God to know we’re made in His image. So, they decided to twist it and make it like that’s a bad thing. Lovely. God ends up summoning what little bit of courage He supposedly has in this anti-religious dystopia and says He’s proud of what He created. “I know my planet is weird,” He tells His family. “I mean, it's frozen on the top and bottom, and the sky changes colors, and people, they don't know what they're doing, and they mess up a lot. But I love it. And I'm proud of it. And, come on. Giraffes are cool. I mean, if you don't get giraffes, if you can't find the joy in a tall dog with a leg for a neck, then I feel sorry for you. I mean, you guys can pick on me all you want. But don't pick on Earth. 'Cause it's here to stay.”

It's then that God decides that his bet with angel Eliza is off because He doesn’t want to blow Earth up after all. He marches into Heaven, Inc. and triumphantly declares to the angels that He’s saving the world, and throws down the gold sphere that was sealed during the bet. However, the sphere is indestructible, as the angels remind Him, and God is unable to break it. (So, the show has now stripped Him of His three most powerful qualities - His omniscience, omnipotence, and omnipresence.) The only way to save the world now is for the angels to get the two people on earth to kiss each other.

Which leads us to Tuesday night’s season finale episode, “1 Hour.” God is eager to help the angels save the planet, but keeps hitting buttons without any rhyme or reason, making lightning strike randomly and causing problems for the angels’ plans. His former assistant Sanjay convinces Him that he has a more important job for Him to do and leads God to the “Department of Mammoths.”

Since God is unable to read, Sanjay tells Him that the sign says, “Department of Love,” and he brings God to a dusty, antiquated machine that is no longer in use, telling Him that it’s a “love machine” and that He needs to just stay there and keep hitting the red button over and over again, which God believes (add naive to the list of bad qualities this show has assigned to Him).

But, as God is continuously hitting the button, it pops off the machine and falls to the floor. When He reaches down to pick it up, He notices that the machine isn’t plugged in. He rushes back into the room where the angels are working with the machine in hand, frantically yelling that He needs to plug it in. As He does, it leads to an overload on Heaven Inc.’s system and the power shuts off, with mere minutes left to save the world.

God: Was that me?

God: How? All I was doing was plugging in the Love Machine.

God: Sanjay? Were you trying to get rid of me?

Sanjay: You want to know something? Yes. Yes, I was trying to get rid of You.

Sanjay: Because You're an idiot! You're a moron! You made a crazy, stupid planet, and now it's gonna blow up! And You know what? It's all Your fault. It's all because of You.

God: I'm sorry. Sorry, everybody. Sorry I let you all down. I'll just let myself out. Oh, come on.

With God out of the way for good, and only seconds remaining, the angels are able to restore power to Heaven and they all watch as the couple kisses on their own volition, thus winning the bet for Eliza and saving Earth from destruction. It’s then that Sanjay, Eliza and Craig (Daniel Radcliffe) take pity on God and go to tell Him the good news about Earth.

For just one minute, the writers make it seem like they might be able to slightly redeem themselves and actually show some respect toward God as the angels surmise that Earth being so messed up was part of God’s plan in order for them to learn how to be strong, but God tells them they’re wrong:

Sanjay: Hey. We just wanted to let you know that Earth's been saved.

God: Oh. Well, you must be really mad, then. Since you hate it so much and think it's stupid and everything.

Craig: But maybe that's the point. You made Earth a hard place so that we have to learn how to be strong.

Sanjay: Whoa. Whoa, whoa, whoa. Wait. Hold on. You knew how this would turn out all along, didn't you?

Eliza: You had it all planned from the very beginning.

Rosie: You've been secretly guiding us every step of the way.

Craig: It all happened for a reason. It was all part of your awesome plan, your grand, unknowable design.

God: No. That would have been cool, though.

Craig: You could have just said yes. We'd have believed you.

Eliza: Do you want to come to the party?

Craig: 'Cause they love Earth.

They just had to mock God’s “grand, unknowable design,” and His involvement in our lives, guiding us “every step of the way,” as one last pot shot. #SMH Thank God, literally, this season is over. Let’s pray that it doesn’t live to see another season and can’t be saved from destruction.