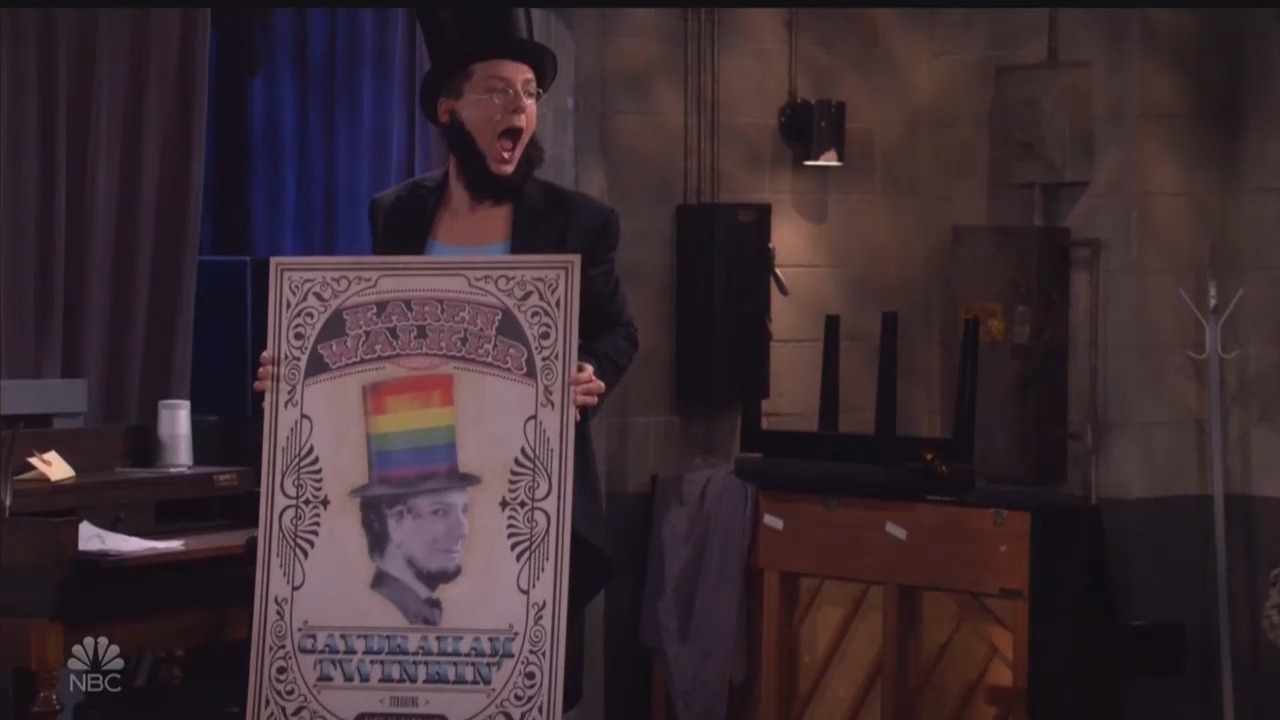 NBC’s comedy Will & Grace played on the revisionist history myth that President Abraham Lincoln was secretly gay (a myth that liberal Hollywood loves to spread) as if it were a proven fact on Thursday’s episode, “Kid ‘n Play.”

The show is well-known for disparaging conservatives fairly often, especially President Trump and his policies, and the “secretly gay” Republican theme is one of their favorites. In fact, Eric McCormack, who plays the show’s title character Will, admits that their goal is to be as offensive as possible with their progressive “humor.”

On Thursday’s episode, gay character Jack (Sean Hayes) begins producing a one-man show titled, “Gaybraham Twinkin’,” that’s “about Abraham Lincoln’s long-rumored gay romance,” with his close friend Joshua Speed. Conservative character Karen (Megan Mullally) finances the play because she needs a tax shelter due to her divorce, and her accountant advised her to invest in something that’s guaranteed to lose money.

Despite referring to the gay myth as a rumor at first, Jack later says, “The show is about Lincoln’s affair with young Joshua Speed,” as if it’s a true part of history, and he begins rehearsing a musical number full of vile double entendres about the revered first Republican president.

Jack: The show is about Lincoln’s affair with young Joshua Speed-- turns out Teddy Roosevelt wasn't the only president with a thing for bears-- against the backdrop of the Civil War. Brother against brother. Brother... On top of brother.

Jack: You know, you hear that, but it's not true. Right now, the whole second act is just a drawing of a horse. Seriously, that's all I got. Anyway, in the 11:00 number, Gaybraham receives a letter from his lover. [As Lincoln] Why, it's from Joshua. What a fine hand he has. And oh, how that hand could relieve the tensions of my southern uprising. Is that too much? Not enough?

Jack: Okay. [As Lincoln] Let's see what my bosom companion has to say.

♪♪ "Of you, sir, I've been thinking ♪♪

♪♪ "And am setting quill to parchment so you'll know ♪♪

♪♪ "That my head is in a fog ♪♪

♪♪ And how you put the 'man' in emancipation" ♪♪

Later, Jack presents Karen with the show’s promotional poster that features Lincoln donning a rainbow-colored top-hat (see photo above), and tells Karen that “all (her) friends,” including Ivanka Trump and Sarah Huckabee Sanders and her family, are coming to the production and are being “so supportive:”

When the play starts to become popular, Karen decides to take control of the play since her name is attached to it, so she hires actor Jon Cryer (who is often confused for Sean Hayes, and vice versa, in real life) to play the part of “Gaybraham,” much to Jack’s chagrin.

In addition to besmirching Lincoln, they also sully the historical, patriotic song, “Battle Hymn of the Republic,” as well as the classic love song, “You Made Me Love You," with more salacious innuendoes.

Jon Cryer: ♪♪ You made me love you. You really got your licks in. Below my Mason-Dixon. ♪♪ Can we--can we stop a second? A-are you sure this works?

Karen: Jon Cryer, anything that doesn't work is going to change.

Cryer: Okay, good, because I-I was a little worried about that part where you changed the lyric in the "Battle Hymn of the Republic" to, "Glory, glory, hole-lelujah?"

Jack: Okay, people, let's take it from-- John Wilkes Booth, what is the meaning of all this?

Cryer: I've been asking that question since I got here.

Jack: Hush, you, whoever you are. You replaced me with Jon Cryer?

Karen: The producers decided to go another way.

Jack: You're the only producer.

Karen: Yes, and I fought for you, honey, but I was outvoted.

Cryer: Uh, should I leave?

Karen: No, no, Jon Cryer. I wanna hear the closing speech. If that's all right with you.

Jack: Why ask me? It would appear this partnership is over.

Karen: Oh. Then we have nothing left to say to each other.

Jack: This is how our friendship ends. Stabbed in the back by my best friend in a theater, just like Lincoln!

Nice try, Jack, but you stabbed yourself in the back in the end with your lack of knowledge of Lincoln history and erased any legitimacy you believed you had with the false gay Lincoln cliché. Not that there was any legitimacy to erase, but you get the point. (No pun intended.)