NBC's ‘Will & Grace:’ Immigrants Should ‘Be White’ or ‘Marry the President’ to Become Legal Citizens 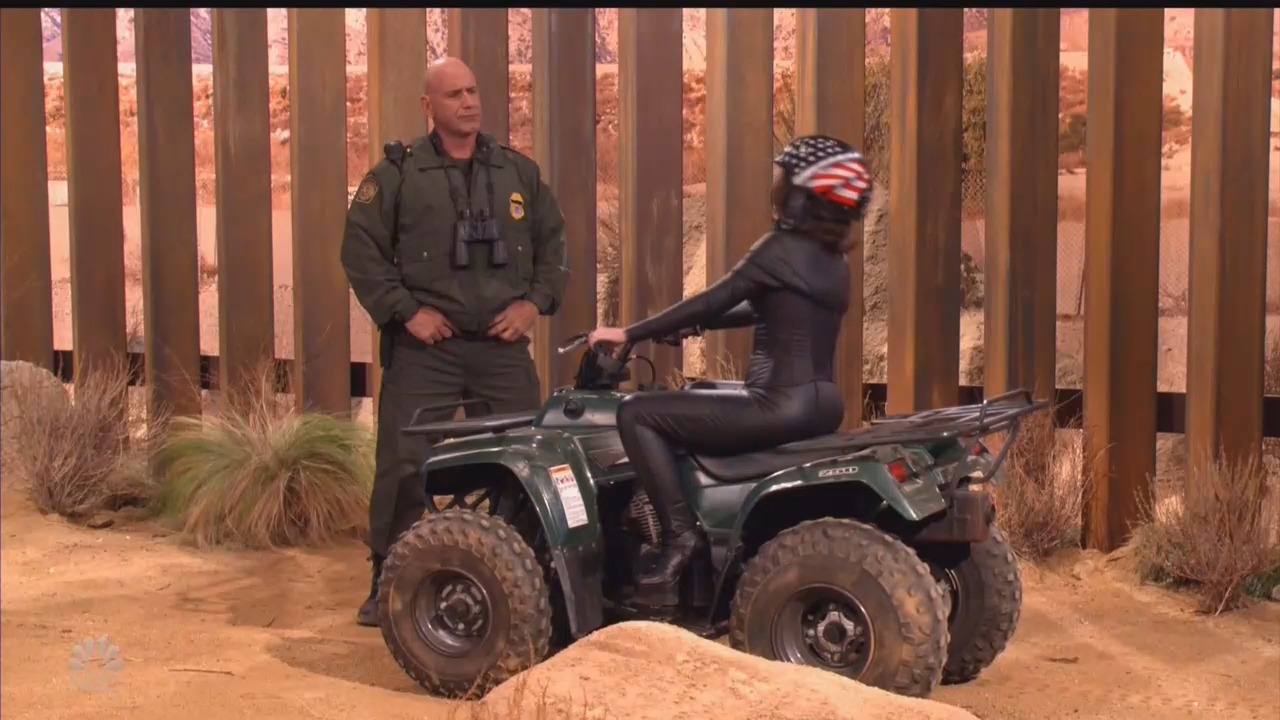 NBC’s Will and Grace took on the issue of illegal immigration and the border wall on Thursday’s episode, “Tex and the City,” as well as painted Texas as a “homophobic” state that beats up gay kids “for sport.” A jailed illegal immigrant is also advised to “do what other immigrants do to try to get in legally, like…be white, or look white, or...marry the president.”

Karen (Megan Mullally) and Jack (Sean Hayes) are planning a visit to Texas - Karen wants to visit a section of the border wall that she sponsored, and Jack is going to attend his gay grandson Skip’s talent show performance at Skip’s church. When they announce their reasons for going to Will (Eric McCormack) and Grace (Debra Messing), Grace tells Karen that the wall is “un-American.” To which Karen retorts, “Only on one side. Our side is un-Mexican.” If you’re unfamiliar with the show, Karen plays the typical rich and ignorant conservative caricature who usually ends up seeing the error of her ways.

In Texas, Karen arrives to visit her portion of the border wall and a police officer asks if he can help her. “I'm Karen Walker,” she announces. “This is my portion of the wall. Pretty, isn't it? I love how it lets them see what they can't have.” When the officer tells her someone else sponsored that part of the wall, Karen replies, “That's impossible. I specifically requested this section because this is where the most illegal drugs get seized.” The officer tells her he appreciates her trying to help keep drugs out of America, which leads Karen to retort, “Who says I’m trying to keep them out?”

As it turns out, Karen’s nemesis Beverley Leslie (Leslie Jordan) sponsored that part of the wall, and he arrives to confront Karen. They get into a physical altercation on their ATVs and get taken to jail.

We then see Karen in jail with an illegal immigrant who “tried to climb your precious wall.”

Karen: This place is pretty miserable. Unless... I'm sorry, is this your house?

Karen: Ah, what are you in for?

Illegal Immigrant: I tried to climb your precious wall.

Karen: Oh, well, maybe you should do what other immigrants do to try to get in legally, like, I don't know, be white, or look white, or...marry the president. Besides, is Mexico so bad?

Illegal Immigrant: I snuck across the southern border fleeing the brutal gangs of my home. I have travelled 2,000 miles and spent my life savings paying off the cops and hiding from the cartels. For me, Mexico has been hell.

Karen: Well. The beaches are nice, but it sounds like you've been mostly inland.

Karen then explains to the woman that she had never heard one bad thing about the wall, despite watching Fox News.

Karen: You know, up until this point, I hadn't heard one bad thing about the wall, and I watch Fox News all the time. I've heard a lot about the War on Christmas, but... well, they've never trashed the wall. Gosh. What if it had kept my Rosario out? She came to America, just like you want to. And all her dreams came true.

Illegal Immigrant: What did she do?

Karen: She cleaned my toilets and made sure I didn't choke on my own sick while I slept.

Illegal Immigrant: My dreams are a little different.

Karen: Really? How so?

Illegal Immigrant: My husband came here four years ago with my daughter. I just want to be with them again.

Karen: Hmm. Here, honey. Take this. I bought it for myself when Rosario died. It's worth a stupid amount of money. Sell it, and maybe you can get yourself out of here and find your family.

Karen is then released from jail because Beverley had sex with the prison guard, who happens to be the same police officer who arrested them at the wall. The officer said they also need to repair the gap in the wall that they created during their fight, but Karen says, “Well, you’re on your own. I’m not sponsoring that thing anymore.”

Meanwhile, Will ends up going with Jack to Texas to see Skip’s performance with him. When they arrive, Jack starts acting strange. When Will asks why, Jack explains, “I didn't know the real Texas would be so... Texas-y, you know? I feel a suffocating cloud of homophobia following us.”

Skip arrives and tells Will and Jack that he’s performing the song “Diamonds Are a Girl’s Best Friend" which sends Jack into a panic, fearing for Skip’s safety. Jack tells Will, “Skip can't sing a song that gay in a Texas church. He'll be scarred for life. Figuratively and, maybe even…” (he couldn’t remember the “other” word, “literally,” but that’s what he intended to say.)

Will reminds Jack that he’s the one who “rescued (Skip) from that conversion camp and gave him the courage to be who he is.” Jack replies, “In New York. Not in Texas. They beat up gay kids for sport here.” He argues that Skip will get bullied, and Will tells him, “Maybe. And that would be horrible. But he needs to live his truth, and you need to support him.” Jack argues, “That all makes sense in America. But this is Texas!”

As for Skip’s performance at his church, he ends up receiving applause from the audience. When Skip thanks his grandfather Jack “for teaching me to always be true to myself, no matter what,” the pastor says, “Sounds like he’s a great role model.”

Jack confesses that he is “the worst role model in the world” because he came to stop Skip’s performance. “I thought they wouldn't accept you as you are. I just assumed they'd be homophobic, but it turns out I was Texa-phobic.” The pastor replies, “Intolerance comes in many forms.” Jack then continues to talk about the importance of being yourself, no matter what.

Ironically, while Democrats continue to harass and demonize anyone that disagrees with their political point of view, Jack continues, “Skip, it's--it's important to see people for who they are, not for who you expect them to be…Please, don't let anyone ever talk you out of being you.”

I wonder if that advice would still be given if Skip were a conservative Trump voter who supports building a border wall. Somehow, I doubt it.