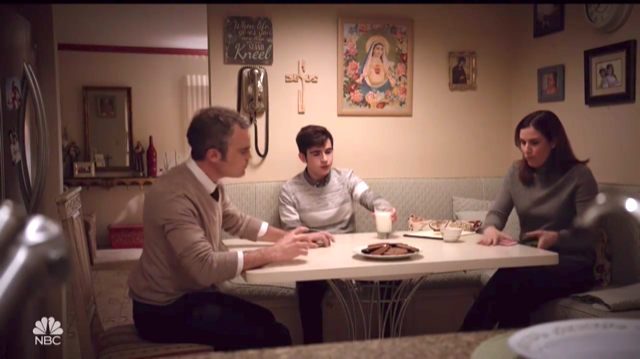 NBC’s new high school drama Rise has been making waves with its overabundance of extremely liberal, anti-Christian messages since it first began airing a few weeks ago. But just when you thought things couldn’t get more offensive, along comes Tuesday’s episode, “We’ve All Got Our Junk,” which surprisingly upped the ante. And yes, they are referring to the urban slang version of the word “junk” to mean genitalia.

In Tuesday night’s episode, Simon Saunders (Ted Sutherland) is adjusting to life at St. Francis Catholic High School and is putting on a “brave” face when he tells everyone it’s a “great school” with a “great academic program.” As you may recall, the former Stanton High student is now attending St. Francis after his strict Catholic parents objected to him playing a gay character in the controversial school musical, as well the play’s offensive themes.

As Simon’s mother, Patricia (Stephanie J. Block), told director Mr. Mazzu (Josh Radner) of the play in the March 27 episode, “I'm sorry, we just-- we don't agree with abortion, gay sex, premarital sex. It talks about fathers molesting their daughters. It's just too dark. This is not the world of values we want our son growing up in.”

In this episode, Simon visits his best friend Lilette (Auli'i Cravalho) back at Stanton, and she offers him some rather interesting advice, considering they are both underage teenagers living at home:

Lilette: If you're really happy, then okay... But if you're trying to please your father or keep the peace between your parents, that's not okay.

Simon: I wish it were that simple.

Lilette: It could be.

Simon: You know my dad. Yeah, you know what he's like.

Lilette: Yeah. So, what? It's still your life to live, not his.

Ironically, in the very next scene, Mr. Mazzu, the enlightened liberal just trying to help students "grow up in the sun and not in the shadows," is having problems getting his own troubled, alcoholic son to obey him and respect his authority. But Simon is supposed to disrespect his father and do what he wants because it’s “his life?” Yeah, that’s not how being a child works. Unless, of course, you’re liberal, and the child in question wants to rebel against his Catholic father to stand up for his liberal beliefs. Then it’s all fine and dandy.

Also, notice how the conversation completely left out his mom, Patricia. You know, the one who decided with her husband that they could not support a play that goes against everything they believe in and made a joint decision with her husband to send her child to a Catholic school to remedy the situation?

So, what happened to her convictions, her faith and her wanting to bring up her son in accordance with her beliefs? This is what happened, as we discover at the Saunders’ dinner table where an emboldened Simon announces he wants to go back to Stanton, as we see Catholic religious imagery in the background once again:

Simon: You did it again.

Simon: Cards is like your superpower, Dad. So, guys, um... I wanna go back to Stanton.

Simon: Well...I checked on their website, uh, about tuition refunds, and if we act within 14 days, it's--

Robert: We decided this. No. The answer is no. Stanton chose an inappropriate play, we chose a more appropriate school. It's done. End of discussion.

Patricia: Robert...Your son is trying to talk to you.

Robert: And I listened to him and gave him my answer. It's for his own good.

Patricia: Why are you so afraid of this play? What about it upsets you so much? If you can explain that to me, then I will support you. If you can't...

Robert: Fine. Go back to Stanton.

I’m sorry... what?! No. Seriously, just what?! Let’s see if we have this straight. Simon’s father Robert (Stephen Plunkett) is somehow now the only one standing behind his convictions and trying to do what’s best for his son and he’s being made to be the villain? And he must explain to his wife what she already explained herself to Mr. Mazzu?! I mean, really?! She knows exactly why the play “upsets (him) so much” because it upset her, too!

Also, why is it that liberals cry “fear” when someone doesn’t agree with them? They’ve made Robert into someone who is “afraid” of the play? Not that he has serious, legitimate reasons to keep his son far away from such drivel. No, it must be that he’s fearful and hiding from something and it’s all really about him. #EyeRoll

And, finally, he just gives in? Just like that? For the literal love of God, WHY?! Well, I guess we already know why. Because these are liberal writers living in a liberal bubble in liberal Hollywood and these stories and characters don’t need to make sense. They just need to advance the writers’ agenda.

All’s well that ends well in Liberal Land, as Simon joins the theater troupe again and all of the teenagers sing merrily along to a song from the play about…masturbation and their “junk,” as Simon and his male love interest in the play share a flirtatious glance and smile.

Student 1: ♪ I know it's so off ♪ I love when you do stuff that's rude and so wrong ♪

Simon: ♪ I go up to my room ♪ Turn the stereo on ♪ Shoot up some you ♪ In the you of some song ♪

Student 2: I lie back just drifting ♪ And play out these scenes ♪ I ride on the rush ♪ All the hopes all the dreams ♪

Annabelle: ♪ I may be neglecting ♪ The things I should do ♪

All: ♪ We've all got our junk ♪

Annabelle: ♪ We've all got our junk ♪ And my junk is you ♪♪

All: ♪ Still keep talking after you're gone ♪ You're still with me then ♪ Feels so good in my arms ♪ They say you go blind ♪ Maybe it's true ♪

Aww, those crazy kids! If you loved this feel-good (no pun intended) song, you can even purchase it, as advertised on Rise's Twitter page!

All kidding aside, that’s exactly what this show is. Junk. In the regular, non-perverted, non-mastubatory meaning of the word, that is.