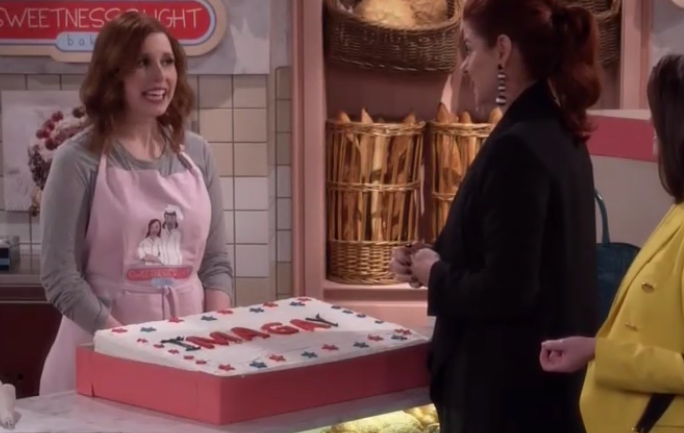 If there’s one show on television that has absolutely no shame in showing its hatred towards conservatives, it’s NBC’s Will & Grace. Thursday’s episode, “The Beefcake & the Cake Beef” was no exception, as a baker refuses to make a MAGA cake for President Trump's birthday. The episode came complete with jokes that Vice President Pence is gay, and triumphantly mocked conservatives as "terrible people" with "horrible beliefs," as well as hateful, white, racist Nazis.

Main character Karen Walker (Megan Mullally), who is a liberal caricature of a rich conservative, heads to a local bakery to order a cake for the president’s birthday. When the baker Amy (Vanessa Bayer) starts talking about her problems with her personal life, Karen quips, “Okay, honey, honey. People like me don’t care about the problems of the white working class. That was just to win the election.”

Karen then tells her that she needs a cake that says “MAGA for Make America Great Again,” because she’s hosting the birthday party for the president at her house and is serving "White Russians" - “But you don’t need to know the guest list,” she says.

Amy refuses to make the cake, and Karen slowly deadpans, “Let me get this straight, Smiley Cyrus. You’re refusing to make a cake because you don’t like what it says?” The audience cheers and applauds the obvious reference to the Masterpiece Cake Shop v. Colorado Civil Rights Commission case in which a Christian baker refused to make a wedding cake for a gay couple based on his religious beliefs.

When Grace (Debra Messing) hears about the situation, she’s immediately incensed, saying, “Seriously? It's just like that thing in Colorado with that baker who wouldn't make the gay wedding cake. That is unacceptable! I mean, we live in New York City! Oh, my gosh! No, no, no! No! You know what? They got Grace Adler on the wrong day. First, I am going down there, and I am going to rip someone a new donut hole, and then, I am coming back with a gay wedding cake.”

When her assistant Tony (Anthony Ramos) informs her that Karen wanted a “Make America Great Again” cake and not a gay one, Grace turns around and says, “She’s on her own.” Tony tries to point out the hypocrisy in Grace’s behavior, to which Grace says, “It's a totally different situation. People on ‘Jezebel’ have explained why.”

Tony finally convinces Grace to go to the bakery to help Karen and when she arrives, she confronts Amy telling her it’s understandable that she refused to make the cake because Karen’s beliefs are “horrible,” but “even people with hateful beliefs have rights…Okay, please just make her awful cake.”

When Amy still refuses, Grace persists, “Okay, look, I--I totally understand, but refusing her is the same as refusing marginalized people, like an interracial couple or a gay couple.” Karen then chimes in, adding, “Or a man married to a dog, or a lamp. Or a lamp married to a dog,” and Grace tells her she’s “much more persuasive when (she doesn’t) talk.”

Amy explains, “I would never turn away a marginalized person. She's asking me to make a cake for my second-least favorite powerful man on Earth. Least favorite. I keep forgetting my dad is dead.” As a customer interjects and asks what the holdup is, Amy explains the situation.

Customer: Excuse me. What's the holdup?

Amy: They want me to make a MAGA cake for the president, and I said no.

Customer 2: Good for you. And shame on you both. That man has insulted and degraded Latinos. –

Customer 3: How can you celebrate that man? He mocks the disabled.

Karen: Okay, thanks for the wide bathrooms, but that's enough out of you.

Karen: And we terrible people have been shamed for too long. But Grace is taking a stand, and I'm with her.

Grace: No. Nope, she's not with me. I am not with her. I'm with the other her. I-I mean, I even wore a pantsuit to vote. I cried when he won.

Karen: Me too. My dealer moved to D.C.

Baker 2: Actions speak louder than words, and your actions say that you're on his side.

Grace: Okay, I--I get it from these two, but I am not taking it from a white guy.

Grace: Did not know that. But anyway, you're still white, so stop coasting. Okay, can you please just do the right thing-- which so feels like the wrong thing-- and make the cake that we both hate?

Grace then threatens to call the ACLU to intervene. “I mean, they’ll represent anyone. Westborough Baptists, Illinois Nazis...” Grace tells the baker. “Fine people on both sides,” Karen adds, a clear dig at Trump.

Amy finally concedes but ends up adding her own “extra touch” to the cake.

Karen: Ha-ha! We won. When they go low, we get high! Honey, I want to see my MAGA cake! Open the box!

Amy: Uh, maybe do that at home.

Grace: Can you lift up your hand, please?

Grace: Uh, your hand is still there.

Amy: How could it be? I cut it off for making this horrible cake. Here it is. One MAGA cake.

Grace: Okay, so you added an “I” and a “Y. Very clever. But this isn't for the vice president. So, can you please take the extra letters off?

Grace: I understand, so I'll do it myself.

Amy: Okay, put it down. This bag squirts frosting, not hate.

The two tussle until Grace ends up falling face-first into the cake, ruining the whole thing. Later, Grace heads back to the bakery to pick up a new cake that Amy has made.

Grace: Thank you so much for making a new cake. I truly, truly hate it.

Amy: Thank you. So do I. But you were right. It's about the principle. On the bright side, once word got out, business really picked up.

Man: I am so sorry. I hate to be that guy, but, uh, can you take a look at this cake again? The, uh, swastika's a little off-center.

Amy: Sure. I'm sorry. It's just, sometimes, when I'm crying, my arm isn't as steady.

Man: Oh, is this for the birthday party? I'll see you there.

Grace: Why are the hot ones always gay or Nazis?

I don’t know, Grace. Could it be the liberal bubble you’re living in that keeps you from seeing reality? We could just as easily ask, “Why are the liberal ones always hateful and/or intolerant?” Especially when they claim to be the exact opposite and act so smug and morally superior while misrepresenting the beliefs of anyone who disagrees with them.