CBS and NBC are heralding today’s Supreme Court arguments as representing “one of the biggest cases of its term.” And while the coverage wasn’t perfect, at least they covered it. ABC didn’t. 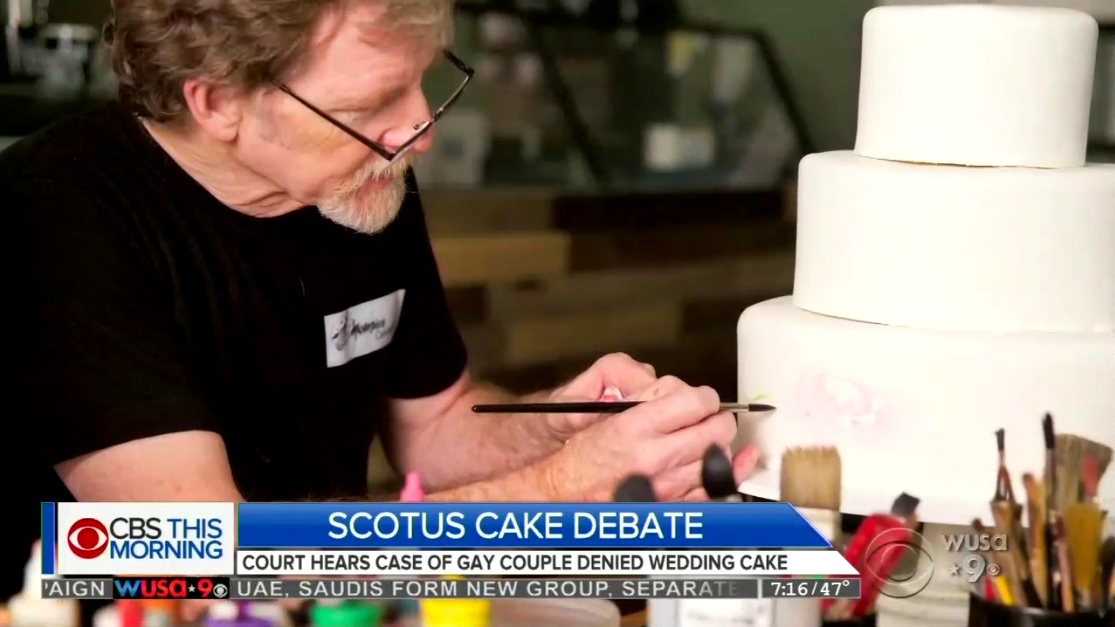 On Tuesday, Dec. 5, the United States Supreme Court heard the oral arguments in the Masterpiece Cakeshop v. Colorado Civil Rights Commission case. The case surrounds Jack Phillips, a Christian cake designer in Colorado, who refused to create a rainbow wedding reception cake for a gay couple, David Mullins and Charlie Craig, in 2012. Phillips cited his faith which teaches that “God designed marriage as the union of one man and one woman” in a USA Today piece Monday.

“I’m happy to sell a cake to anyone, whatever his or her sexual identity,” Phillips said, but this was “a message tailored to a specific couple and a specific event — a message telling all who see it that this event is a wedding and that it is an occasion for celebration.”

Writing on the case for National Review, senior writer David French, declared “I’ve never seen a case more mischaracterized in my entire legal career.” That included, he added, in pieces published by the media. If the media cover it at all, that is.

During the morning news shows Tuesday morning, the morning of the arguments, ABC’s Good Morning America didn’t mention the case that CBS and NBC recognized as a “big,” “landmark case.”

For Today, NBC anchor Savannah Guthrie introduced the case “regarding same-sex marriage and religious freedom.” From there, justice correspondent Pete Williams addressed the “big case.” Williams even outlined Phillips’ position that “gay marriage is against his religious principles.”

“He says his cakes are works of art, and that requiring him to bake them for same-sex weddings would violate his freedom of speech, forcing him to express a view as an artist that he disagrees with,” Williams concluded.

For This Morning, CBS anchor Norah O’Donnell brought up the “landmark case” that’s “one of the biggest cases of its term.” She described it as a “battle between religious liberty and anti-discrimination.”

But while O’Donnell referenced religion, she framed the case as “protection” for gay marriage.

“The court ruled in 2015 that the constitution protects same-sex marriage nationwide and now it will decide just how far that protection goes,” O’Donnell added.

Chief legal correspondent Jan Crawford agreed that it was a case that “pits a right to free speech and free religion against a right to be free from discrimination” between a “devout Christian baker” and a “same-sex couple who just wanted a wedding cake.”

She interviewed both parties. Mullins and Craig, she said, saw it a “discrimination.”

“I started to break down and I cried,” Craig said, while Mullins added that Phillips’ refusal was “humiliating,” “painful” and “degrading.”

But turning to Phillips, Crawford also said that “for Phillips, the ordeal was also painful.” He stopped making cakes.

“Phone calls were coming, harassing, swearing at you to where my wife was afraid to come into the shop at points,” Phillips said, tearing up. “There were just – there were tears and it was just like, ‘What's going on? What do we do?’”

Crawford wanted to know what he would do if the Supreme Court ruled against him.

He responded, “If we have to close business in order to stand for our faith, then that’s what we’ll do.”