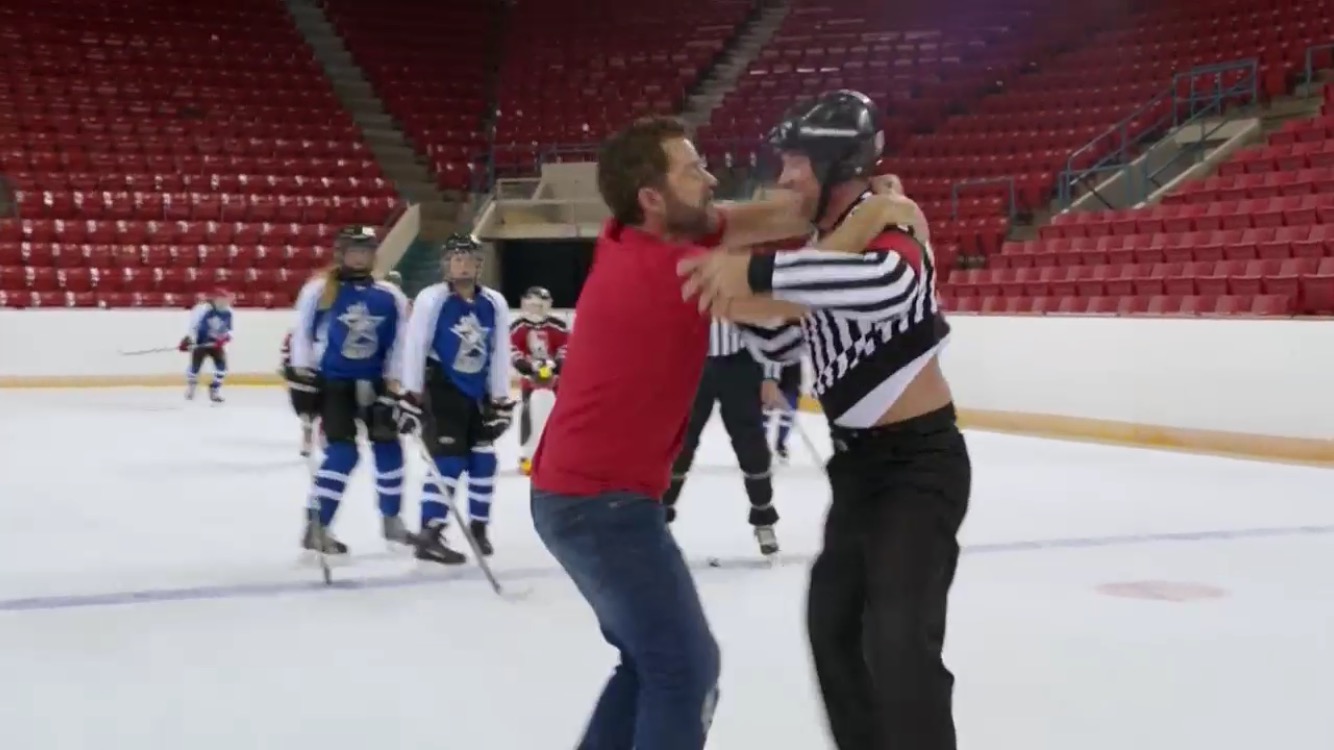 Of all the television shows for the husband of Sarah Palin to make an appearance on, Todd Palin strangely chose TBS’s extremely liberal comedy The Detour. Produced by leftist commentator Samantha Bee and her husband Jason Jones, the show was originally based on the real-life family road trips of Bee, Jones and their children, but has now devolved into vile material that Palin should have thought twice about associating himself with.

Now into its third season, the Parker Family is hiding out in Palin’s hometown of Wasilla, Alaska, and on the run from the law for crimes committed by Robin’s (Natalie Zea) father. Jones plays Robin’s husband, Nate Parker, on the show.

On Tuesday’s episode, “The Goal,” Todd Palin plays a hockey referee who gets into a physical altercation with Nate, who coaches the young players. It’s almost an eerie foreshadowing of the real-life altercation that would later take place in Palin’s life, as his son attacked him inside of his home this past December. (Assuming the filming took place before the attack.)

Nate: What the hell was that, Stripes?

Todd: He was offside.

Nate: The penguin was offside, not him.

Todd: Come on, coach, look around. Who's your show for? Have a little fun. And call me Todd.

Edie: Coach, I-I-I just need a second. Hey, thanks for calling me back. Listen, I need to ask a really big favor of you, okay? Um, I have this friend.

Nate: Fight for the puck!

Edie: And then I was hoping you could maybe run a comm tap on him for me.

Nate: Oh, come on, Stripes! Take that call back to Wuss-illa!

Edie: No, no. I'm just -- I'm just helping him out. I'm his assistant coach and friend.

Delilah: What? He was all over my shit! This is my crease! My crease, God damn it!

Delilah: Get off my crease!

Nate: Parker, on your feet. Go sit in the back for your sister, would you?

Jared: You have to be on the ice to take the penalty.

Nate: Go sit in the box!

Nate: Hey! Skate guards off. God, who does that?

Edie: I am just really getting to know Nate now. He's really starting to trust me. And the weird thing is, he is not the idiot I thought he was. He's actually a really great dad and a damn fine hockey coach. Oh, can you be professional, please? He's a surveillance target. Just get me the tap.

Nate: I've been to your house, Todd. You can't see Russia!

Todd: She never said that!

Jones discussed Palin’s guest appearance when he was on Jimmy Kimmel Live on January 18 and said that their last two lines were completely ad-libbed. Of course, the "I can see Russia from my house!" line came from Tina Fey during her stint as Sarah Palin on Saturday Night Live in 2008 but was conflated with a real Palin quote in liberals' bid to tear her down.

Jones also cheerfully admitted to the show’s inappropriateness, particularly as it pertains to underage female children and the sensitive topic of sexuality.

Jason: If you haven't seen it, the very first episode of the very first show, my daughter who is 10 at the time gets her period in a strip club. That sets the tone. You get it after that.

Jason: The strippers are very nice to her, they take her through it.

Jimmy: You have an episode in Alaska this year, right?

Jimmy: Oh, the whole season is in Alaska? Okay, are you really in Alaska or did you shoot that elsewhere.

Jason: We shot it in my home country Canada because it's cheaper.

Jimmy: You did get a famous Alaskan to appear.

Jason: We did, yes. I don't like to giveaway spoilers but since you brought it up, the former first man Mr. Todd Palin.

Jimmy: Did you goof on him when you were doing the show?

Jason: He was a very lovely man. He played a referee I was an intense hockey coach, you know, Don Cherry type, coaching small children who couldn't skate, but I was really intense. He makes a bad call and we get into a fight, the ref and myself fight and as we're tussling I threw in the line, “I've been to your house Todd you can't see Russia.” And then he threw out the line, “She never said that.”

Jimmy: Was that a line or was he just defending himself?

Jason: He was just defending himself. Yeah, and then I was like, “Hey, I hope that was cool.” And he's like, “Yeah, you got your joke in.”

Jimmy: They're probably used to that by now.

Jones: I think they're pretty used to it.

So far this season, The Detour has depicted residents of Wasilla as crazy, backwoods hicks who don’t understand firearm safety and whose mayor was an Alpaca before they voted for son Jared Parker to take over the position because of his ability to do “miraculous” back-flips.

In the show’s defense, the Parker family is portrayed as being just as crazy as the residents of Wasilla, so it’s hard to say if it’s an attack on Palin’s hometown or just more strange storylines and characters thought up by the writers for the sake of their brand of comedy.

Whatever the reason, there’s really no excuse for storylines such as the most recent depicting Delilah’s (Ashley Gerasimovich) “sexual awakening journey” with her father Nate. And while that episode may have aired after Palin’s cameo was taped, there are plenty of offensive storylines from past seasons that should have made him second-guess his decision to appear on the show. Not to mention the extremist views of producer Samantha Bee.

While it was certainly a breath of fresh air to see a man of good character on the show, it’s disappointing that Palin would want to be associated with anything that The Detour stands for.