Season Two of TBS’s ‘The Detour’ Ends as It Began: ‘Wrong’ and ‘Effed Up’ 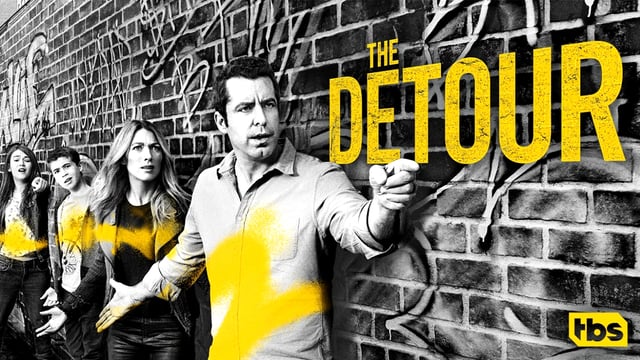 We got to bid farewell to season two of TBS’s The Detour in the April 25 double episode, the latter being a super-sized, limited-commercial season finale. But if you thought this was the last of the ongoing attacks on Christianity and family values, you’d be wrong.

Right on the heels of Tuesday night’s finale, it was announced that the show has been renewed for a third season. Not only can we expect more Jesus bashing and other offensive material, but we’ve been warned it’s actually going to get worse.

Thom Hinkle, senior vice president of original programming at TBS stated, “Season two has been so smart, hilarious and wrong. And from the early nuggets I’ve gotten from Jason and Sam, season three is going to be even more effed up.”

I don’t know about smart and hilarious, but season two’s double episode finale was definitely wrong. It seems the writers wanted to bring back every joke told during the whole season, including racial quips, political jokes, attacks on prayer, and more. I think the only thing missing was rampant sexual depravity.

No, no, wait. That was covered, too, as Nate (Jason Jones) woke up in Cuba to a servant giving him a massage and adding a twist on a happy ending (referring to it as “waking him up.”) Of course, he didn’t protest.

Just like season two itself, though, both episodes did have a couple of redeeming moments.

The first came in part one, “The Mule,” where Nate and his wife Robin (Natalie Zea) head to Cuba to exchange the literal rear end of a sculpture for their children, who are being held semi-captive by Robin’s father J.R. (James Cromwell). We find out later in part two, “The Ass,” that the rear end piece ends up being part of the infamous deconstructed sculpture of Saddam Hussein from Iraq, and is worth millions. And J.R. has the rest of the statue reconstructed and ready for the last piece to be added.

As Nate and Robin are making their way through a Cuban field on their way to find their kids, they end up in a precarious situation that hilariously mocks the stupidity of animal rights extremists:

Nate: You hear that?

Robin: It's probably just an iguana or something.

Robin: How do you know that?

Nate: Everybody knows that.

Robin: Nobody knows that. That's an iguana. You got zapped real bad. It's probably electricity in your head, huh?

Nate: You don't hear that?

Nate: Okay, well, if you get bitten by a snake, not my fault.

Nate: Jackass is screaming about something.

Nate: Yeah, 'cause we're in his field, probably.

Nate: We're not gonna hurt you.

Nate: Come on, dude. You don't want this.

Nate: Is that dynamite?

Nate: What the hell did you just do? Seriously! What is your major malfunction?!

Robin: You just killed a bull! Look what you did!!

Nate: This is the height of animal cruelty!

Robin: Yeah, if Cuba had a PETA, we'd be on the phone with them right now!

Nate: I know you guys are trying to step into the "Modern era," but you got a lot to learn about how we treat our animals! You...are...a monster.

Nate: That's for that bull.

And the second redeeming scene, was in the finale episode, “The Ass,” as Robin, Nate and their children accidentally find themselves in a boat with Cubans who are defecting to America:

Nate: We are the [bleep] worst parents ever. Jesus Christ. We're going back to nothing.

Robin: I know, but we're gonna make it work.

Nate: There's nothing in New York for us.

Nate: You want to live in Florida?

Cuban: You know, you guys complain a lot. Is that what the rest of America's like?

Cuban: America's the greatest country in the world.

Cuban: Only people that grew up with freedom don't like America. America on its worst day is still better than Cuba on its best. We make it to land, your country takes us -- me, my family -- and puts us in a hotel -- Swift Stay Suites. Air-conditioning, pool, business center. 32 cable channels, including Ted Turner's Superstation. That's the oppression of infinite choice.

Robin: Yeah, but then what? Don't they just send you back?

Cuban: No, we make it to land, your country grants us economic asylum. They send us to new places, like Delaware or better -- Nebraska. We become whole new people. That's a great country.

Nice nod to TBS there. And some major truth about freedom in American versus Cuba that you wouldn't expect to hear from Ted Turner. Unfortunately, President Obama ended America's longstanding "wet foot, dry foot" Cuban policy on his way out the door so it's no longer accurate to say Cubans get asylum.

Overall, the few redeeming scenes don’t make up for how “wrong” the show is though, as Hinkle put it. And if season three is going to be even more “effed up,” I can’t even imagine what The Detour will have in store.

Something tells me it won’t be patriotic, Christian or conservative, though. Just a hunch.