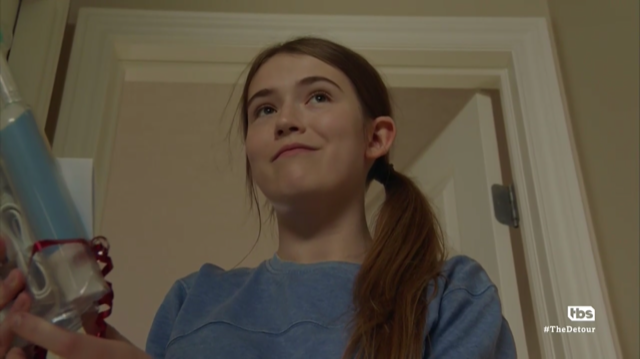 Just when you thought Hollywood couldn’t sink any lower in their depravity and twisted attempts at humor, especially when it comes to child actors, along comes Tuesday’s episode of TBS’s The Detour, “The Stop.” Which were my thoughts exactly as I watched. “Please, for the literal love of God, make it stop.”

The show is freshly into its third season, which is set in Alaska, as the Parker family is on the run from the law. They are wanted in questioning for crimes committed by Robin’s (Natalie Zea) father. The show was originally based on real-life road trips by married producers Jason Jones and liberal extremist Samantha Bee. Jones plays husband Nate Parker on the show.

But it was the sexually explicit storyline for child actress Ashley Gerasimovich, who is celebrating her 14th birthday at the time of this writing, that was the most egregious in this episode. Gerasimovich plays daughter Delilah Parker who appears to be the same age on the show, having been dubbed the “young, teenage daughter” by TV Series Hub in a recent interview.

In the beginning of the episode, we see Delilah sitting on top of a stationary snowmobile with the engine running. Her father Nate is currently a stay-at-home dad while her mother Robin is working as a stripper at a nearby bar. When Delilah sits down to eat Nate's "rocketship pancakes" that are more phallic than rocketship, she laments that she can’t talk to her father the way she can her mother and that she wishes he could understand her the way her mother does.

Later, after Nate takes a “blue pill” to help him have relations with his wife, and is looking at provocative pictures online, he finally develops an erection and he dances around the house to celebrate. Soon thereafter, though, Delilah walks in and decides she’s willing to share what she’s been keeping to herself…that she had her first orgasm on the snowmobile and now can’t stop sitting on it.

Delilah: Hey, we need to chat.

Nate: It's not a good time right now.

Delilah: It's about Suzi.

Delilah: The snow machine that I ride a lot.

Delilah: When I spend time with her, it's like the greatest feeling in my life. Then it gets a little intense, and then I have to turn her off right away, like immediately. Maybe an hour later, I start smiling and think, boy, I miss Suzi. And I was thinking, is what I'm doing wrong?

Delilah: The big O? Yep, it happened, and I know I'm young.

Delilah: But everybody is different, and every body is different, and there's no wrong way to enjoy your body. And I'm sorry I was awkward about telling you before. Thinking I could only draw pictures or talk to mom. I was part excited, part scared. But it's a modern world. Things are changing, and obviously you're comfortable in this situation.

Delilah: That wasn't a question.

Delilah: Oh, my God. That disgust on your face is exactly why I didn't want to tell you. I need a cheerleader for female pleasure, not a gatekeeper for morality, Neanderthal!

Nate ends up buying an electric toothbrush for his “very, very young” daughter as an apology for not being a “cheerleader for her female pleasure.” He attaches a note that says, “For your ‘teeth.’ Love, Dad.” As Delilah reads the note, a smile lights up her face. 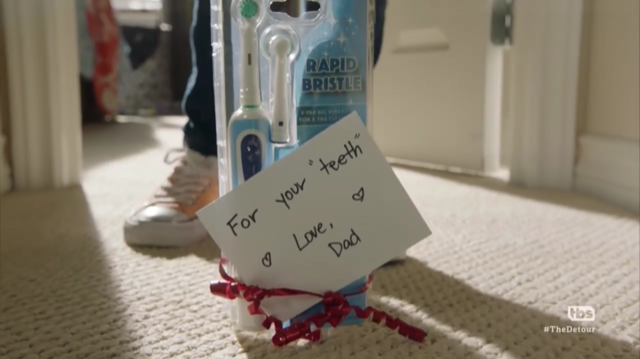 I’m not sure how it isn’t in some way illegal to have a young, underage girl having to play out such disgusting, sexually explicit scenarios with an adult male who is supposed to be her TV father. It’s just wrong on so many levels I’m not even sure where to start.

With the #MeToo and #TimesUp movements going strong, where’s the concern for young, underage girls being put into sexually explicit roles and situations? Isn’t that a slippery slope towards making pedophilia, incest and abuse seem more “woke,” which is how Nate is described in another storyline in this episode that highlighted the ridiculousness of “non-binary” gender roles and pronouns.

After son Jared (Liam Carroll) arrives home from a date with his new girlfriend Sarah, Nate gets a lesson in the confusing language of non-binary speak.

Jared: Yeah, they are.

Nate: They? Is there another one out there?

Jared: No, just them.

Nate: Wait. How many people are you dating?

Nate: She's the one.

Jared: They's the one.

Nate: Sarah, she's the one I just saw?

Jared: They are, yeah.

Nate: They? Are you messing with me right now?

Jared: No, but you said she.

Jared: They are they.

Nate: They? You said it was just one.

Jared: They are one person.

Jared: Their name is Sarah.

Jared: They don't go by he or she because they are non-binary. They don't identify as one gender or the other.

Jared: They don't conform to a strict sexual identity, either. They are queer.

Nate: What? I'm not judging. I'm just trying to understand it.

Nate also has some gender confusion over Robin’s new boss, “Big Papa,” and is feeling jealous since Robin has been spending a lot of time with “him.” While still feeling the effects of the little blue pill, he charges out to Big Papa’s car to confront “him” as “he” drops Robin off after work. As it turns out, Big Papa is a woman who likes to use “he” pronouns and she’s also the mother of Jared’s non-binary girlfriend Sarah.

Jared: They don't confirm to a strict sexual identity.

Robin: He's not really a dude.

Tom: You can't pull off a midriff like he can.

Jared: They don't identify as one gender or the other. They are one person.

Nate: Shit. Big Papa is two -- t-w-o spirited. Yeah. And this is his child, their name is Sarah. I just wanted to say hi. I got laundry to fold.

Big Papa: Oh, my God, he's such a sweetheart.

Robin: He really is.

Big Papa: And so woke.

If this hot mess is what it means to be “woke,” then I happily “identify” as ...asleep? Whatever the opposite of “woke” would be. Asleep, as in hoping this is all just a nightmare that we can all be “woke” up from.