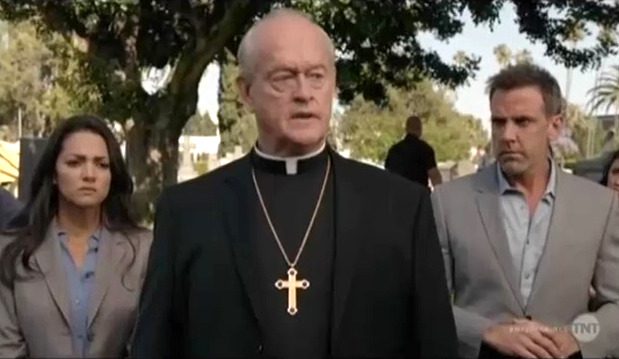 TNT’s Major Crimes continued its all-out assault on the Catholic Church and priests in its Tuesday, November 24 episode, “Sanctuary City: Part 3.” They also kept up with their caricature of deranged, gun-toting, right-wing white males who oppose illegal immigration to the point of wanting illegals dead, and, for good measure, took a quick jab at homeschooling, too.

This final season of Major Crimes aired in five parts and centered around the disappearance of three teenage boys while on a field trip with their Catholic church and school, St. Joseph’s. In Tuesday’s episode, Father Jonas, a teacher at the school and mentor of the three boys, remains a prime suspect in the boys’ disappearance but has fled to Mexico.

Right off the bat, the episode opened with a priest arguing with the investigators over their search of Father Jonas’s room and the priest makes the extreme threat of excommunicating Catholic LAPD police commander Sharon Raydor (Mary McDonnell) for “attempting to break the sacred bond between a penitent and a priest,” a ridiculous notion that begs the question, What is the church trying to hide?

Investigators then spoke to Bishop Calhoun about the case and try to find out where in Mexico the Church sent Father Jonas to "protect" him. As the bishop arrogantly continued to try to thwart the investigation, tensions rose, as did the slams against the Church:

Bishop: Your bias against the Church is leading you in the wrong direction.

Sharon: Your Excellency, I'm a lifelong Catholic. I hold no bias against the Church. And I am in charge of this investigation.

Bishop: Then stop these baseless accusations and the reckless media coverage they've created.

Mason: If there's no reason to suspect Father Jonas, why send him away?

Provenza: Was the trip planned, or did you find a great airfare for murder suspects online?

Bishop: The Church was worried about Father Jonas's welfare. Obviously, for cause.

Sharon: We can extradite him.

Bishop: Can you? Did you know Father Jonas holds dual citizenship? Mexico might not feel obligated to hand over one of their own, relations between our two countries being what they are.

Mason: These boys went missing during a Catholic school-sponsored field trip. One of them was found dead on Church property. That's not just a crime. That's a civil lawsuit.

Sharon: Every second that you refuse to cooperate, the damages in this lawsuit become more expensive.

Provenza: The Archdiocese of Los Angeles has paid out over $700 million in abuse scandals. Closed churches. Shut down monasteries. How much more can you afford to lose?

Can't let one scene go by without reminding of the Catholic Church abuse scandals, now, can we?

It is revealed that one of the boys is gay and that he told Father Jonas, which immediately made the detectives even more suspicious of him. But as it turned out, Father Jonas was not gay, he was alleged to have had affairs with several of the mothers of students in his last school.

We find out Father Jonas wasn’t on the field trip with the boys because “last week, Father Jonas buried six undocumented people with no family in L.A., spending money he gets from his relatives on their coffins and headstones.”

This led the L.A.P.D. to order that the bodies be exhumed to see if Father Jones buried the missing boys with the rest of the dead. Once again the bishop grandstands in a press conference:

Bishop: I begin by saying how shocked and alarmed we are by the LAPD, as though these families haven't grieved enough without the city attempting to exhume the bodies of their deceased loved ones. I'm appalled that, even in these problematic times, the authorities would target undocumented people who make this city work and for whom the Catholic Church has offered a haven.

Reporter: What about Father Jonas Alcaraz? Have you offered him a haven, too?

Bishop: Father Jonas is being persecuted for his service to Christ.

Flynn: Oh, boy, here we go. The self-righteousness starts all over again.

Bishop: Your focus on a man of God instead of the loss suffered by the Diaz family confuses me.

You would think the leftist writers and producers in Hollywood would be a huge fan of the Catholic Church for its support and sanctuary of illegal immigrants. But apparently, that’s not enough to overcome their outright disdain and disrespect for all things Catholic.

Sprinkled throughout the episode were jabs taken at the expense of the Catholic Church and its priests. The bishop was called a "bastard" by one detective, Father Jonas "handsy" and "a known mother-lover," along with several other lines delivered dripping in sarcasm.

Detective Louie Provenza (G.W. Bailey) in particular showing disdain towards the Catholic Church has been a common theme this season, as has his propensity for snidely speaking to crucifixes. He continued the latter in this episode while caressing a reflection of a cross on a wall, asking in a mocking tone, “Where, oh where, did our little priest go?” When told Father Jonas is a "respected and much-loved priest," he asks suggestively, "How much loved?"

Attention later shifts from Father Jonas to another suspect, Marvin Garrett (James Morrison), a neighbor of one of the missing boys. As we learned last week, he’s a white supremacist who is a federally licensed gun dealer and hates illegals to the point of wanting them dead.

We are shown a video from Marvin's website, complete with loud sustained gunfire, which is obviously intended to portray those who oppose illegal immigration, as well as those who own guns, as deranged, hateful, extremist conspiracy theorists and law-breakers.

Buzz: Hold on. I think this is the one.

Marvin: They can't cross the border if it's a wall. And if the "Mexi-cants" try to launch themselves over the wall...

Buzz: Sorry. There's so many of these videos of Marvin just talking and shooting guns.

Nolan: Talking where, though? That's not his backyard.

Nolan: This is what I was looking for.

Buzz (Phillip P. Keene) then notes that in one of Marvin’s videos, he’s using a flash suppressor, and that he doesn’t have any of those registered to his name. This is enough evidence for the F.B.I. to do a Federal Firearms License Compliance Check. When they show up at Marvin’s door, he protests, calling them “fascist pigs.” They find the flash suppressor and arrest Marvin at the scene, as he protests, “What the hell! You're arresting me and not the illegals?”

Investigators take the opportunity to interview Marvin’s daughter Kelly while he’s under arrest, since Kelly was dating one of the missing boys. She gives homeschooling as an alibi for her father, as does Marvin in his interrogation. For some reason, investigators demand an explanation for why Marvin was homeschooling.

He explains, “L.A. Unified is a joke. Even you liberals know that. I'm not sending her to a place where she has to learn surrounded by scary thugs who don't speak English.” Investigators then suggest private parochial schools as an alternative, despite spending this entire season vilifying one. Martin says he’s not interested in parochial schools because they “protect illegals.” Yes, homeschoolers are crazy racists!

Marvin then explains how he told the boyfriend’s father to keep his son away from his daughter, “I told them we were different. We weren't Catholic. We weren't brown. We were born in America.” Despite being informed that Lucas was born in America and his family's third-generation Americans, he insists, “That's why that little bastard tried to date my daughter -- so he could marry her someday and get his green card. But Kelly's too smart for that. She knows what Mexicans are like.” He similarly blusters, when told she dated a Mexican-American boy, “She dated the American part.” 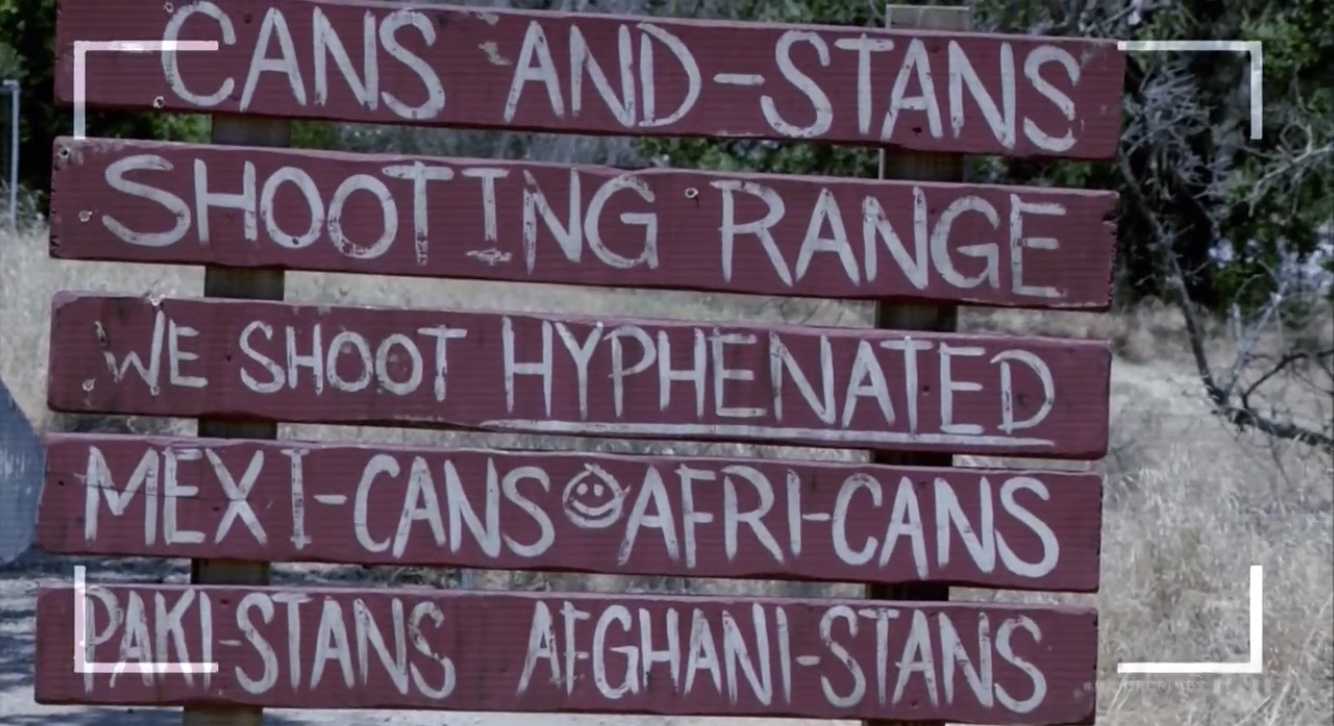 The investigative team finally discovers where Marvin’s secret hideaway is and conducts a search, stumbling upon his “Cans and -Stans Shooting Range.”

Detectives discover a file titled “Hit List” on his computer “full of Hispanic surnames and addresses, cross-referenced to a map.” Some of the names are checked off with a skull and crossbones icon next to them. There’s also a list of visitors to the “Can Shooting Range” who are part of a vigilante squad, “dedicated to the forced deportations of lawbreakers destroying American civilization."

This led them to uncover cases of assaults of “undocumented workers” that might be connected to Marvin, as one perpetrator said he was inspired by his videos. “He’s building an army online,” Sharon remarks.

At the end of the of the episode, we find out that the two remaining boys were found alive and well in Mexico, but the answers as to why remain to be seen in the coming episodes.