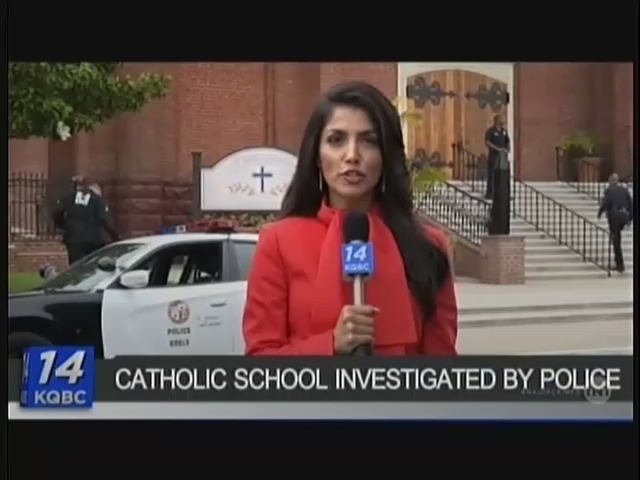 When a show begins with a main character looking at Jesus Christ on a crucifix in a Catholic Church while snidely saying to Him, “Thanks for nothing,” you know right away that there is a clear anti-Catholic bias and that things will go downhill from there. In the same program, a detective remarks, “We found Lucas Garza's body at a Catholic church. You know who hangs out at Catholic churches? Priests.”

TNT’s Major Crimes spent most of their Tuesday, November 7 episode, “Sanctuary City: Part 2” bashing priests and the Catholic Church with similarly offensive remarks, and made a priest a prime suspect in the disappearance of three teenage boys, referred to as the “St. Joseph’s Three,” who went missing while on a field trip with their Catholic church and school.

Father Jonas is a teacher at St. Joseph’s and a mentor to the three boys, one of whom has already turned up dead at the church in a flower bed. One detective notes, “Father Jonas just can’t stop telling us enough how close he was to these boys.” Father Jonas further tells the detectives that he had an “intense” relationship with Ryan, and that doesn’t sit well with them.

Ryan came from an abusive home and was neglected, which leads main character Sharon (Mary McDonnell) to suggest during Father Jonas’s interrogation, “Neglected kids make better targets for exploitation.” Another detective, Camila Paige (Jessica Meraz), asks Father Jonas, “If you knew that Ryan was getting knocked around, why didn't you report it?” “Apart from the Church's little habit of covering up abuse,” District Attorney Andrea Hobbs (Kathe Mazur), watching the interrogation from another room, adds in another dig.

Other characters, such as Ryan’s estranged father, join in insinuating an improper relationship existed between Ryan and Father Jonas, and he’s referred to as “that freaky priest,” and “that asshole priest.”

Finally, detectives get a tip from an intern working at the Office of the Archdiocese that makes it appear that Father Jonas may indeed be guilty:

Nolan: Your lovely intern gave up what might be damning information on Father Jonas.

Raydor: What sort of damning information?

Nolan: He's been transferred to six different dioceses over the past five years. Monterey, Tucson, Denver, Reno, Phoenix, and L.A.

Tao: And two of these transfers happened in the middle of the school year.

Flynn: Sounds like another one of the Church's tried-and-true tactics to cover up sexual abuse.

Provenza: Well, our priest has told us over and over how close he is to these boys. Intensely close.

Provenza: Could've been the trunk.

After obtaining a search warrant for Father Jonas’s room, they discover that he’s fled the country.

Illegal immigration is also a focus of this five-part series, as one of the missing boys’ parents is in the country illegally. This leads to a debate over sanctuary cities between the F.B.I. and the L.A.P.D. with one officer arguing, “Do you want them to stop stepping forward as witnesses, to quit reporting rapes, missing children, and murders out of fear of being deported?”

Of course, such a show wouldn’t be complete without having an angry white male who hates illegal immigrants and wants them dead living next door to one of the missing boys:

Fey: Turns out Marvin Garret does more than make calls to ICE about his neighbors. We found an IP address linked to a computer he uses at home.

FBI Agent 2: Not sure who owns the website, but it's called unhyphenatednation.com, and Marvin is its administrator.

Vega: "Unhyphenated Nation" is dedicated to the end of multiculturalism and the removal of all extensions to the word "American." For example, the hyphens between African-Americans, Mexican-Americans, Asian-Americans...

Tao: Hmm. What about Irish-Americans and Italian-Americans?

Vega: That doesn't seem to come up.

Tao: The site is operated by Marvin?

Vega: Under the pseudonym "Buddy E. Lee," so he didn't pay for it, and it's not listed under his real name, which is why it slipped by you guys. You see? The Patriot Act comes in handy now and then.

To top off this caricature, they of course make Garret a federally licensed gun dealer as well.

As an aside, the show completely mishandled a type 1 diabetes storyline, from mislabeling the disease as “Type A diabetes” several times by several different characters, to showing grossly unrealistic diabetic supplies (I know because my daughter is a type 1 diabetic), proving that the writers don’t know what they’re talking about and are lazy with their research and information. So, can they really be trusted to handle these other serious issues properly?