In Sunday night’s episode of HBO’s Girls, “Full Disclosure,” Lena Dunham's character Hannah is still informing her close friends and family about her pregnancy. Her decision to keep the baby comes as shocking “news” to those she tells given that Hannah is, much like Dunham herself, strongly liberal and extremely pro-abortion (so much so that Dunham stated publicly that she wishes she had had an abortion.)

But her friends and family come around to the news when they realize she's serious. One friend, Marnie (Allison Williams) has a lot of questions, some of which Hannah is not quite ready to answer.

Marnie: What do you got?

Hannah: Not a joke, just what's going on in my uterus.

Marnie: Holy fucking shit. Hannah, how did this happen?

Hannah: How does anything happen? I went to the Hamptons.

Marnie: Yeah, and you decided just to not use any birth control whatsoever?

Hannah: I told him to pull out, but you know I tend to swallow my Ps, so maybe he thought I said, "All out." I don't know.

Marnie: Are you fucking kidding me? Hannah, the pull-out method does not work. I literally know hundreds of pull-out babies.

Hannah: You do not know a hundred babies.

Marnie: Hannah, what are you going to do?

Marnie: Stop fucking with me. You're not gonna have a baby.

Hannah: I'm gonna have a baby.

Marnie: I'm into it.

Hannah: Are you serious?

Marnie: Yeah. You're old enough, so, yeah. And, you know, on the spectrum of human beings, you basically have your shit together. Plus, wouldn't it be kind of great just to have somebody else to consider?

Hannah: I can't believe how supportive you're being. This is a shock. It kind of makes me want to do it less.

Marnie: Oh, my God! This is wild. Okay, I have a million questions. Do you know if it's a boy or a girl?

Hannah: No, it's, like, way too early for that, but if it's not a girl, or like, the gayest boy in the entire world, obviously I'm gonna flip the fuck out.

Marnie: Oh, the father. Like, is he gonna be involved? Is he gonna help?

Hannah: I'm not telling him.

Hannah: No, I don't want him to be a part of the kid's life, so why would I tell him?

Marnie: Because he's the father and he deserves to know.

Hannah: That's a pretty patriarchal, old-fashioned attitude to have.

Marnie: You are obviously going to tell him eventually. But even if you weren't planning on it, your baby is gonna grow up to wonder, like, "Where is my father and why did he leave us?"

Hannah: Yeah, and I can worry about that when she can talk, when she's, like, seven. And until then, I don't want to have to trouble him. He has enough stress with, like, his, you know, water skiing issues and his girlfriend.

Marnie: So, he's a water skier with a girlfriend?

Hannah: It's my body, okay, and it's my baby, and I have made the choice that I am not going to tell him.

Marnie: Okay, I take back what I said about you having your shit together because this is fucking insane.

Hannah: I knew that you were gonna try to be controlling and control the entire way that I brought my child into this world. And I probably shouldn't have even told you until I was in labor.

Though abortion advocates try to claim that abortion isn’t used as birth control, Girls depicts the type of situation that commonly leads to just that. Hannah’s friend Marnie rightfully chides her for her irresponsible decision to use the pull-out method, but of course, doesn’t say a word about having a random sexual encounter with a man she barely knows.

Marnie also points out a common trait of Millennials - their lack of consideration for other human beings and their me-centered attitude. “Plus, wouldn’t it be kind of great just to have somebody else to consider?” Meaning that they usually only consider themselves.

Which could be why Hannah will “flip the fuck out” if she doesn’t have a girl or “the gayest boy in the entire world.” Having a straight son isn’t an option she would personally prefer, and of course, it’s all about her. Such a wish reveals a very anti-male attitude as well. As does her desire to not inform the father that she’s pregnant with his child. Despite Marnie telling her the father has the right to know, Hannah says that’s a “pretty patriarchal, old-fashioned attitude to have.” Telling a man that he is a father and giving him the right to be involved in his child’s life is patriarchal and old-fashioned? I suppose in Hannah’s self-obsessed, male-hating world that must be the case.

And what is Hannah’s reply when Marnie pushes the issue of telling the father? The typical, pro-abortion propaganda, “It’s my body.” It doesn’t make much sense in any setting, but especially not this one. This father’s child is not “her body.” The baby has its own, separate body, complete with its own DNA. It will one day be outside of Hannah’s body, walking around, talking and making its own decisions. And even while in the womb, should it die, Hannah will not die with it because they are separate bodies. And if something goes wrong in the baby’s body that requires surgery, a surgeon can operate on the baby while in utero and fix the problem in the baby’s separate body.

Since Hannah’s good friend is not on board with the idea of keeping her pregnancy a secret from her baby's father, Hannah goes to her own gay father and his partner for advice.

Hannah: I just kind of think it's, like, a lose-lose, okay? If I tell him and he doesn't want to be part of the child's life, he's just gonna feel this, like, undue burden of having a child. And if I tell him and he does, then what I am I gonna do? 'Cause I don't wanna sound classist or whatever, but I'm not raising my child half the year on an all-inclusive resort. I'm just gonna, like, treat him like a sperm donor, okay? And sperm donors traditionally are not told. 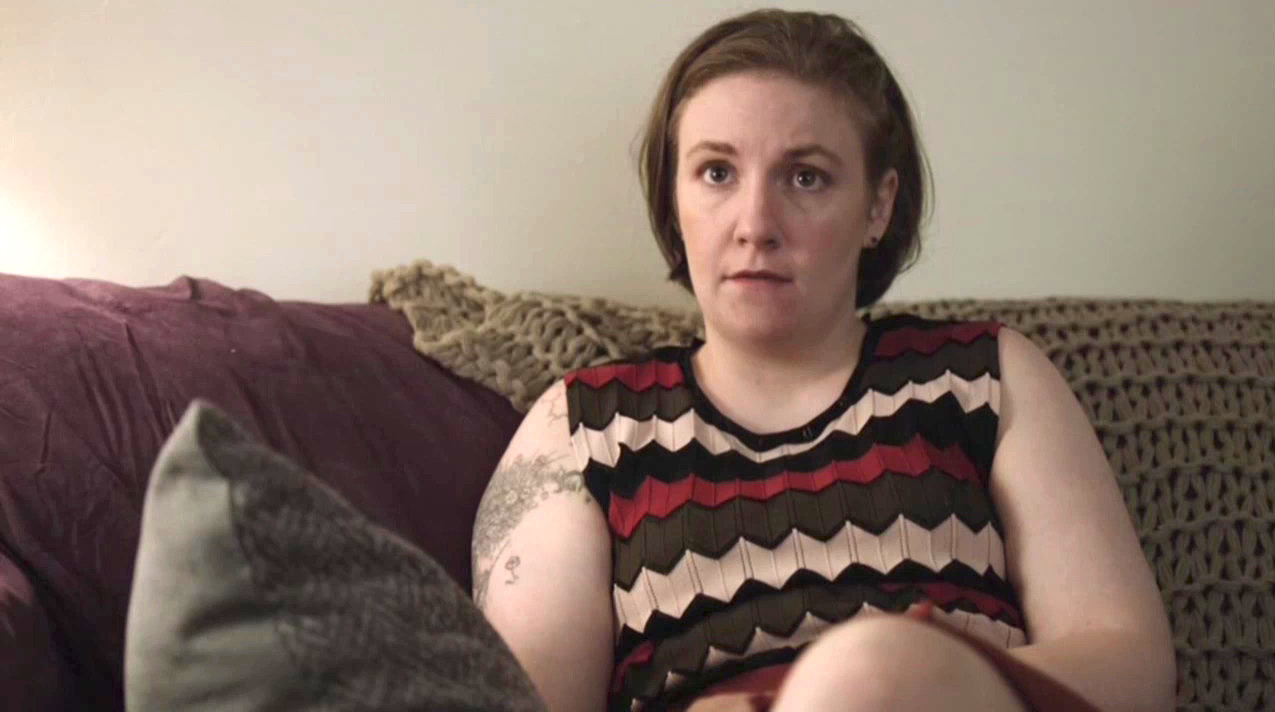 Keith: Well, you know, as someone who was a sperm donor, I can tell you I certainly did want to be a part of that child's life.

Hannah: Do you have a kid, Keith?

Keith: Sadly, no. You know, my lesbian friends, Aminy and Roni-- you met them, Tad, the pot roast people.  They wanted to use my sperm, but it didn't work out. Anyway, after they started trying, they told me they didn't want to tell the child that I was the father, and it was extremely upsetting. I mean, that person would have been a part of my life.

Dad: But, honey, this story is different. The man Hannah lay with wasn't having sex with the intent to make a child.

Hannah: Nothing about his life projects the idea that he wants a child.

Keith: Well, it still doesn't change the fact that the child will be his.

Dad: Hannah's already decided. It's her body. I think we all need to do exactly what we feel is right for us. I clearly learned that lesson the hard way.

Keith: Oh, come on, you can't equate what Hannah's doing with your lifetime denial of being a gay man.

Dad: They both involve personal freedom.

Hannah: You guys don't have to get worked up about—

Dad: As a mother, Hannah has to decide what's best for the baby. And not telling the father is what she's decided is best. Are you going to tell every mother how to raise their child?

Keith: I just don't think she has enough information to make a fair decision. She doesn't know who this guy is, what he wants.

Hannah: I have a pretty good sense of who he is. He wears, like, a puka shell necklace and his days off are Thursday and Tuesday.

So, the poor surf instructor, who decided to have unprotected casual sex with a woman he barely knows, might “feel an undue burden” over having a child? (Something that neither one of them apparently considered while having unprotected sex.) That’s a valid reason for not informing him that he is a father?

For a feminist like Hannah to reject the notion that men should be responsible for the children they helped to create, is awfully contradictory to feminist values. Quite a conundrum Hannah is in, wanting to disavow men altogether by not informing the father and wishing for a girl or “the gayest boy in the entire world,” yet also letting men off the hook for any responsibility, such as child support, for their child.

It speaks to how men seem to often benefit the most from having abortion as an option, since it allows them to have random, casual sex and not have to be responsible for the consequences - after all, it's her body, her choice. Perhaps that could explain why Playboy is such a strong supporter of abortion?

Surprisingly, Hannah’s father’s partner Keith argues for telling the baby's father since he was upset at being cut out of the picture after donating sperm to his lesbian friends.

Hannah’s father, however, reverts to the same selfish, pro-abortion catch phrases that Hannah used before with Marnie, saying it’s “her body” and that we all “need to do exactly what we feel is right for us,” while somehow equating it with his “lifetime denial of being a gay man,” as Keith points out and disagrees with. But Hannah’s father persists saying that “they both involve personal freedom.”

So, if you’re a straight man, Girls wants you to know, it’s not about you, ever.

No, Hannah only wants a girl or the gayest boy in the world. So, her disdain for straight men even flows to her own child. Her best friend is gay. Her father is gay. And the straight man she slept with is persona non-grata, who Hannah wants completely out of the picture.

Because this is Hannah’s world. Or Lena Dunham’s version of Utopia. It’s all about Hannah, and only Hannah, all the time. Straight men, whether they’re the father of her baby, or the very baby she births, are clearly have no rights in it, unless Hannah decides they do.