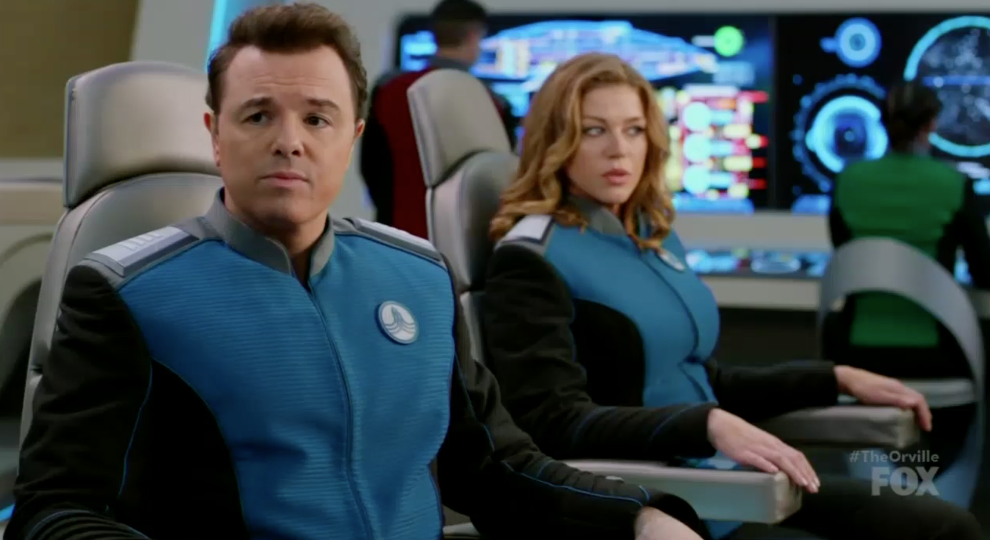 Instead of boldly going where no man has gone before, Seth MacFarlane’s parody of Star Trek has decided to go where every liberal TV show has gone before. Thursday night’s episode of FOX’s The Orville “tackles gender norms, transgender issues,” according to Forbes.

In last week’s episode, “Old Wounds,” Second Officer Bortus, a member of a supposedly all-male alien species, hatches a baby girl. In tonight’s episode, titled “About a Girl,” Bortus and his mate demand that the ship’s doctor perform a sex change on the infant. The doctor refuses, explaining that she “will not perform a sex change on a perfectly healthy newborn.” Only teenagers or older, apparently.

The main characters are against the sex change. But it’s difficult to ignore the interspersed, shoehorned arguments made in favor of sex reassignment surgery.

For instance, when Bortus insists that the operation occur, Captain Ed (Seth MacFarlane) offers, “Why not just let the kid decide for herself when she's old enough?” Bortus responds by comparing sex changes to cleft palate operations. If there really is such thing as being born the wrong gender, then there’s no difference between sex reassignment surgery and surgery to fix a cleft palate. But even liberal Seth MacFarlane's character can see the difference.

Bortus: I have asked her to see to the conversion of my child to the male gender. She has refused. I request you order her to comply.

Ed: You want to perform a transgender operation on a baby? Bortus, that is completely unethical.

Bortus: On my world, it would be unethical not to do so.

Ed: Why not just let the kid decide for herself when she's old enough?

Bortus: Captain, in human biology, is there not an occasional mutation called a cleft palate?

Bortus: What happens to a child born with this condition?

Ed: It's usually corrected right after birth, takes about 12 seconds.

Bortus: And why do you not wait and let the child decide for himself whether he wishes to correct this condition?

Ed: Oh, my God. You're kidding, right? Bortus, that is completely different. Being a girl is not a condition. There are no health risks. Having a vagina doesn't give you a-a lisp. I mean, depending on how you use it.

Bortus: It is different for my people. On our planet, there are no females. For you to judge us by human standards is unfair.

Later, an artificial life form on the ship, Isaac, asks, “I do not understand the reason for this conflict. Would the gender alteration procedure harm the infant or endanger her life?” Fortunately, First Officer Kelly (Adrianne Palicki) brings up the obvious harm—psychological harm. But for her, the harm is due to the operation occurring without the child’s consent.

Kelly and Ed also express doubts about being against the surgery. Ed states, “We all know how easy it is to judge another culture's way of life just because it's alien to us.”

In a silly turn of events, after watching “Rudolph the Red-Nosed Reindeer,” Bortus decides against the surgery because his daughter “may be destined to do great things as a female.”

The episode turns into a battle of the sexes after it’s revealed that Moclan females are not unheard of, but rare, and the Moclans give them sex changes due to their inferiority. Even Bortus’s male mate was born female. After a trial on the Moclan’s home planet, where sex changes are again compared to minor procedures, like circumcision, the baby undergoes the operation.

It’s a happy ending, as the parents of the once female baby decide that, “whoever he becomes,” “we must give him a good life.”

Those wondering if the show will be as funny as MacFarlane’s usual stuff can at least sleep well knowing it will be just as liberal.