'The Young Pope' Finale Hails Atheist Pope as a Saint: 'Those Who Believe in God Don't Believe in Anything'

The last, and probably the least, episode of HBO’s The Young Pope aired February 13 and nicely tied together the anti-Catholic theme with liberal arrogance. In the third episode of the show, the Pope (Jude Law) declared, “I believe only in myself.” His words ring true again in the season finale.

In the episode, the Pope responds to his own question, “Do you believe in God?” with the answer, “I don’t. Those who believe in God don’t believe in anything.” Whatever that means. Of course, the Cardinal he is speaking to is unfazed by that horrendous statement by the head of the Catholic Church. In fact, another Cardinal asserts that this Pope will become a “saint,” as his prayers “move God,” before citing the list of “miracles” the Pope has performed. The Cardinal even refers to the Pope’s “miracle” execution of a corrupt nun as a “divine punishment.”

HBO is clearly giddy about the Pope they created. After a few love letters are published documenting a very young Pope’s thoughts about an old girlfriend, one news outlet asserts, “The world has stopped turning to talk about love.” The news is “not focusing on evil anymore,” but on “love” thanks to the Pope’s “heartbreaking love letters.”

It’s not just the Cardinals foaming at the mouth for the Pope, but the Pope himself. After Sister Mary (Diane Keaton) asks the Pope a question, he responds, “It’s difficult for a saint to answer all the questions of humanity.” Additionally, the Pope has a vision of himself speaking to all the past popes, who give him the sage advice, “In the end, more than in God, it is necessary to believe in yourself.”

HBO didn’t let the show come to an end without one last swipe at the Catholic Church. Cardinal Voiello muses on his love for Sister Mary, exclaiming the “age-old question”: “Who ever said that a man can’t love God and a woman at the same time? That’s bullshit!” 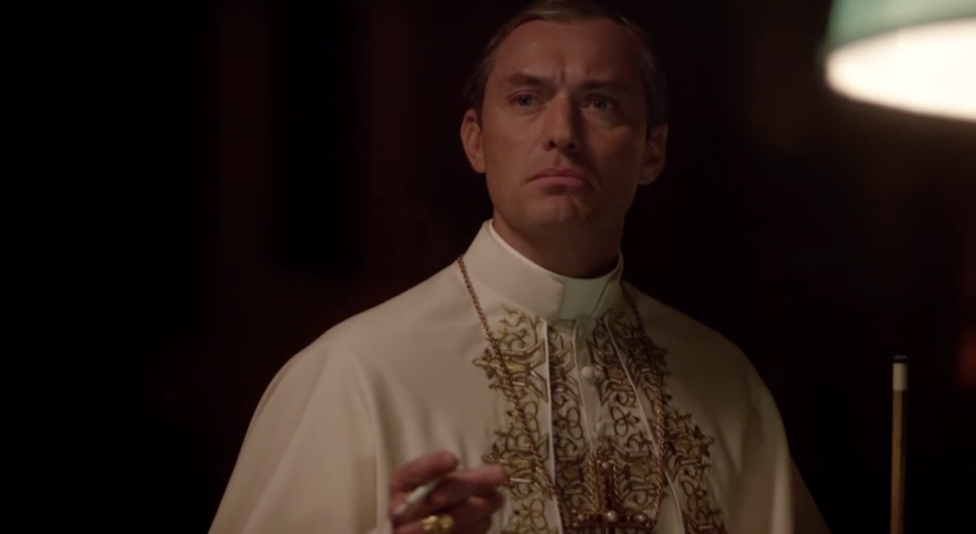 The final scene is comically bad, as the Pope finally reveals himself to the people in what’s supposed to be a profound, heartwarming speech (but is actually full of silly phrases like, “Are we warm or are we cold?”). The camera pans over all the characters of the show smiling through tears, including the Cardinals who schemed against him, Cardinal Dussolier’s murderer, and the prostitute the Pope flirted with in a bar. After the Pope catches a glimpse of his long lost parents in the crowd, he stumbles to the ground clutching at his chest. An image of what seems to be the Blessed Mother appears in the sky above him.

Of course, Mary, the Mother of God, would bless a woman-groping Pope who argues that no priests respect the vow of chastity and that all priests and nuns are “unhappy” and “cowards”. It is HBO, after all.