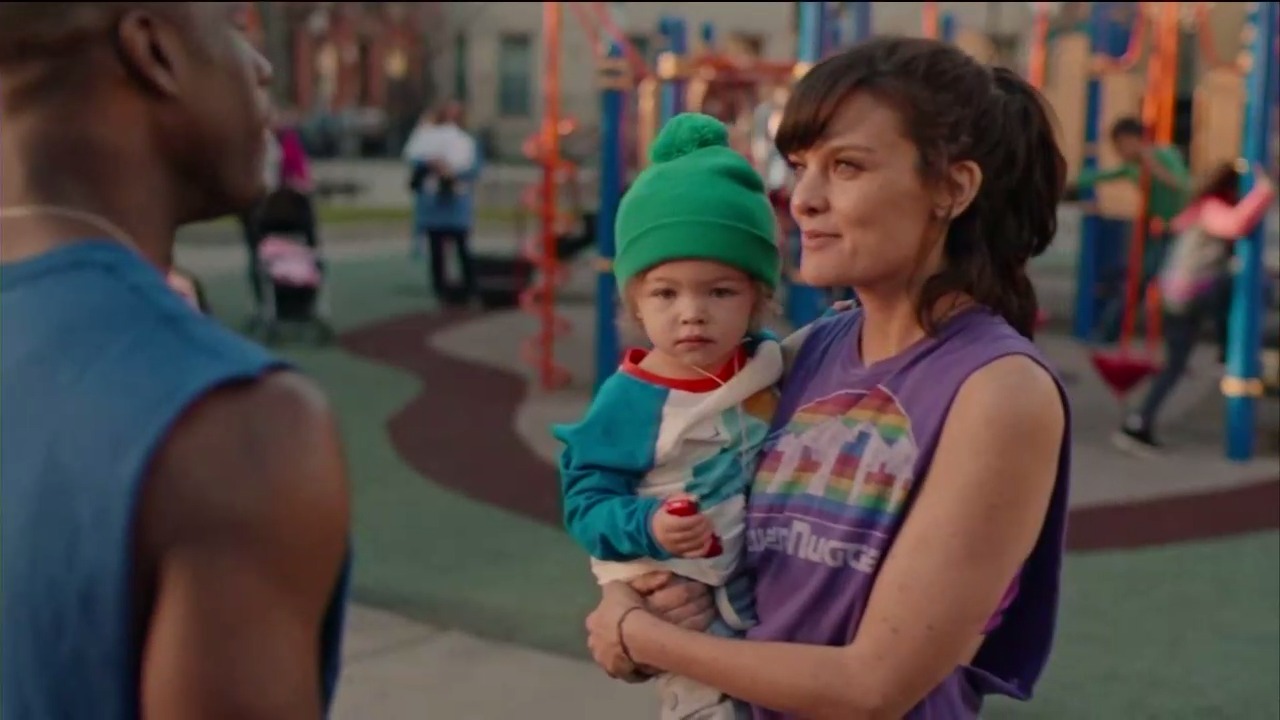 I had very low expectations of SMILF, and the November 5 premiere of Showtime's new comedy, titled “A Box of Dunkies and Two Squirts of Maple Syrup,” lived down to every one of them. In only 30 minutes, the show fit in more crass content than most shows do in years on the air. Since there was no real theme to said content, aside from being gratuitous, I think it's best to introduce you to this show simply by walking you through the first episode.

As for the name, it's the more-common slang acronym MILF (Mother I'd Like to F...), with the word "single" in front of it. So, we're off to a classy start. Speaking of which, the show opens with the main character Bridget (Frankie Shaw) impressing a group of men with her basketball skills and the song playing over this scene features the lyrics "Hey, bitch, wait til you see my dick." First impressions count, and this is what they chose. One of the men from the basketball court starts to flirt with Bridget until her baby son Larry wakes up and he realizes she's a mom. He then not-so-subtly blows her off. Then we really get into the episode.

The first real scene of the show is little Larry's bedtime routine. His newly-sober dad Rafi (Miguel Gomez), comes over every night to put Larry to bed and, on this particular night, Bridget "catches" him praying with his son. "Knock it off," she tells him, "Come on, there's no praying in this house." A round of applause for this show taking three minutes to go after people of faith. Bridget tries to get Rafi to stay and hang out with her but, failing that, gets out her vibrator. So we get to watch that. Not enough? We see her fantasizing about the guy from the basketball court. And the other guys from the basketball court. At once.

In the morning, Bridget drops Larry off at her mom's (Rosie O'Donnell) house, then heads to the doctor for a check up. It would appear that her health clinic is Planned Parenthood or another abortion clinic, because there's a man outside with a sign who is telling people, "Pray for your baby." I guess we're supposed to be offended by that? Anyone who enjoyed this show has a moral compass that is pointing south when mine points north, so they probably were. This guy who values prayer and unborn children was pretty much the only thing to which I could relate on the entire show. At the clinic, Bridget is obsessed with the idea that her lady parts might not be the same now that she's given birth (this will be relevant later, unfortunately).

Speaking of good parenting, Bridget puts Larry to bed that night, then runs down to the corner store for junk food while he's sleeping. They don't seem to live in the best area of Boston, and he's only about a year old, so this is a very bad idea on a lot of levels. While Bridget is at the store, she runs into a guy she used to know, Jesse. So, when she gets home and is shoving junk food in her face, she texts him to ask a favor. She hasn't has sex since Larry was born, so would he mind stopping by to help her out with that? This is a good time to mention that she and Larry share a bed. So, after she makes herself throw up the junk food she just ate, she covers Larry up, hoping he'll stay still and sleep for an hour.

When Jesse comes to her apartment, Bridget immediately tells him to undress, then gets on the bed and pretends to be a slave about to be raped by her master. Jesse finds that disturbing, as did I. Bridget doesn't even want to kiss, she just wants Jesse to have sex with her and tell her if her vagina feels the same as it did before she had her baby. That's the actual point of this bizarre booty call, and he's ok with it until he looks over and sees little Larry's foot sticking out from under his blanket right next to them on the same bed. He jumps up from the bed, and the audience gets full frontal male nudity. He dresses, but tells Bridget that everything seemed fine down there as he runs out the door.

At this point, we were 29 minutes into the episode, and I was thinking that everything objectionable had to be over. It wasn't. Bridget is an failing actress whose only claim to fame was one episode of Law & Order and, in the last scene, we see her try out for a public service announcement. It's about soldiers going through horrible things in war, then coming home to fight the battle against PTSD, which Bridget jokingly compares to being sexually abused by her father. That's where the episode ends, while the song plays, "I want food and pussy. How come? It's just the way God made me."

I certainly never expected Rosie O'Donnell to be the least objectionable part of the show. Then again, the season is young.