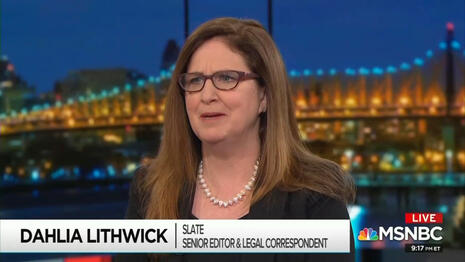 In light of the state banning abortions once an unborn baby’s heartbeat can be detected in September, The Washington Post published two articles this week that profiled Texas women who run Christian, pro-life charities. To many pro-lifers, it was surprising and welcome coverage of the good works of a crisis pregnancy center and a maternity ranch, Catholic and evangelical, respectively. Needless to say, this was not appreciated by leftists who expect all mainstream media sources to uphold the pro-abortion line at all times.

On Wednesday, Slate’s Dahlia Lithwick called the coverage “deeply strange” and drew comparisons to The Handmaid’s Tale, while her article’s subheading castigated The Washington Post for “spotlighting a disturbing alternative” to abortion. Lithwick’s piece served a as brushback pitch, warning the paper not to get out of line again.

To Lithwick, The Post covering the Christian, pro-life organizations fairly was part of a misguided notion of “both siderism” and an “example of what can go wrong when a publication apparently believes there are ‘two sides’ to human rights atrocities and rape.” I agree! It’s far past time we stop giving a voice to the other side of the human rights atrocity of abortion.

Speaking of which, she gave a leading perpetrator of human rights atrocities, CEO Amy Hagstrom Miller of Whole Woman’s Health, space to complain:

Yeah, Christians helping women and babies in need is totally bizarre and nonsensical! Meanwhile, even Lithwick herself had to admit one organization’s “work procuring food and diapers for babies and their moms in the name of God is moving,” and another’s “story and charitable efforts are admirable. Hers is a deep and loving faith.”

But, make no mistake, Lithwick still thinks they serve “religious paternalism.” She recalled an article on how “the ‘idea of chivalry’ motivates…white supremacists,” natch. “For years now, the charity and good works of crisis pregnancy centers and religious efforts of state legislatures have been similarly dressed as chivalric, when the story right below that layer is simply and obviously an attempt at upholding patriarchy and forced pregnancy.” Or, you know, saving the lives of tiny unborn humans with beating hearts.

Abortion is freedom in her Orwellian world and anything that helps a woman choose life puts that profoundly at risk: “The words maternity ranch can sound generous and loving, but they also fundamentally distort the fact that substituting Huggies for broad freedom represents a big step backward for human agency.”

She said it was “as though the Post, in casting around for an upside to taking away women’s life choices, has determined that the upside is More Kindness/More God.” The horror!

Lithwick wanted the wonderful Christian women saving lives to be condemned as tools of a repressive patriarchy. So, by not publishing outrageously biased profiles, The Post is complicit:

“But fêting as heroes the people who step in when all choice has been removed and replaced with Bible study and male dominated doctrine about family is not sober objectivity. It’s falling prey to the oldest, most paternalistic tropes in the book, then passing it off as progress.”

Something tells me The Washington Post will not be making this same mistake ever again.