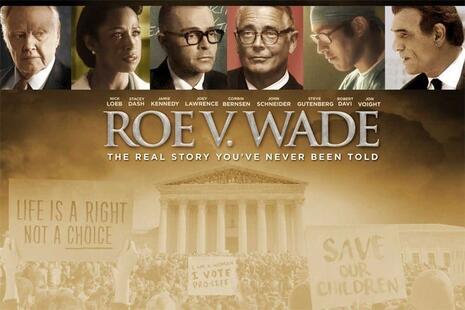 Written and directed by Cathy Allyn and Nick Loeb, the latter of whom also stars as abortionist turned pro-life advocate Dr. Bernard Nathanson, the movie faced several roadblocks over the many years it took to complete, including multiple instances of Facebook censorship, and, now that it’s finally here, liberal reviewers are all predictably shrieking that it’s full of lies.

Variety’s review said the film is an “atrocious anti-abortion propaganda piece” that “has no use for facts.” Writer Tomris Laffly wrote that it matched the Trump days “when right-wing fabrications were routinely presented as truth,” and compared it to Chuck Todd lecturing Kellyanne Conway, “Alternative facts are not facts. They’re falsehoods:”

Targeting politically simpatico viewers and anyone they can convert on the other side of the aisle — while perhaps taking a page out of the former administration’s playbook — Allyn and Loeb present their own “alternative facts” as a definitive account of the famous court case, asserting that what we have been told about Roe v. Wade is a big lie. Far from impartial, their revisionist telling amounts to a sometimes sexist smear campaign, executed with roughly the competence of a cheaply assembled infomercial as it exploits religious guilt to disgrace a legal medical procedure.

As for finding supposed falsehoods, Laffly took a swing and whiffed hard:

Throughout, Allyn and Loeb use cheap tricks and insinuation to prop up their swelling piles of falsities, as when they defame Planned Parenthood’s mission by associating it with its founder Margaret Sanger’s belief in racial eugenics, despite the fact that the organization had already distanced itself from Sanger.

She makes it seem like Planned Parenthood had renounced their racist founder way back in the 1970s when the film takes place, but it only happened in July 2020! History is already being rewritten, but we won’t forget Planned Parenthood’s 100 yearlong embrace of Sanger. For 50 years, Planned Parenthood gave out the “Margaret Sanger Award” as their “highest honor” as well as the “Maggie Awards for Media Excellence” – as recently as 2016 a recipient of the award won for an article titled “How False Narratives of Margaret Sanger Are Being Used to Shame Black Women.” But, yeah, shame on Roe v. Wade for tying Planned Parenthood to Sanger!

Despite all this, The AV Club’s review similarly denied history, proclaiming, “Margaret Sanger’s racism is supposed to discredit abortion, despite the fact that today’s Planned Parenthood has had no problem divorcing its mission from the name of its founder.” No problem? It took them over a century and happened less than a year ago!

The AV Club also bashed the film for “serving up a buffet of lies, de-contextualized framings, and rickety emotional appeals” and adopting “the Trumpian tactic of lobbing so many refutable points in a row that an opposition doesn’t know where to start.”

Senior Entertainment Editor Marlow Stern at The Daily Beast badgered actor Jamie Kennedy for being in “one of the most appalling movies of the year,” calling Roe v. Wade “pretty insidious right-wing propaganda,” and even comparing it to the 1935 Nazi propaganda film Triumph of the Will.

Stern turned into a pro-abortion activist trying to argue with Kennedy and fact-check the movie, which is rich considering he repeated the old, debunked lie from the abortion giant that “Abortion is only 3 percent of what Planned Parenthood does” and falsely claimed, “Late-term abortions are rarely practiced, and really only usually done if the health of the mother or fetus are at risk.” According to 2018 CDC statistics, at least 4,648 late term abortions (after 21 weeks) were committed (the count doesn’t include California, Maryland and New Hampshire). Furthermore, all studies and research, even from the pro-abortion Guttmacher Institute, indicate late term abortions are performed on healthy women and babies.

Unlike Dr. Nathanson’s famous pro-life documentary The Silent Scream, these liberal reviewers loudly scream for the abortion industry. That's how you know the movie does something right.

Roe v. Wade was released April 2 and is available now on Digital and on Demand.