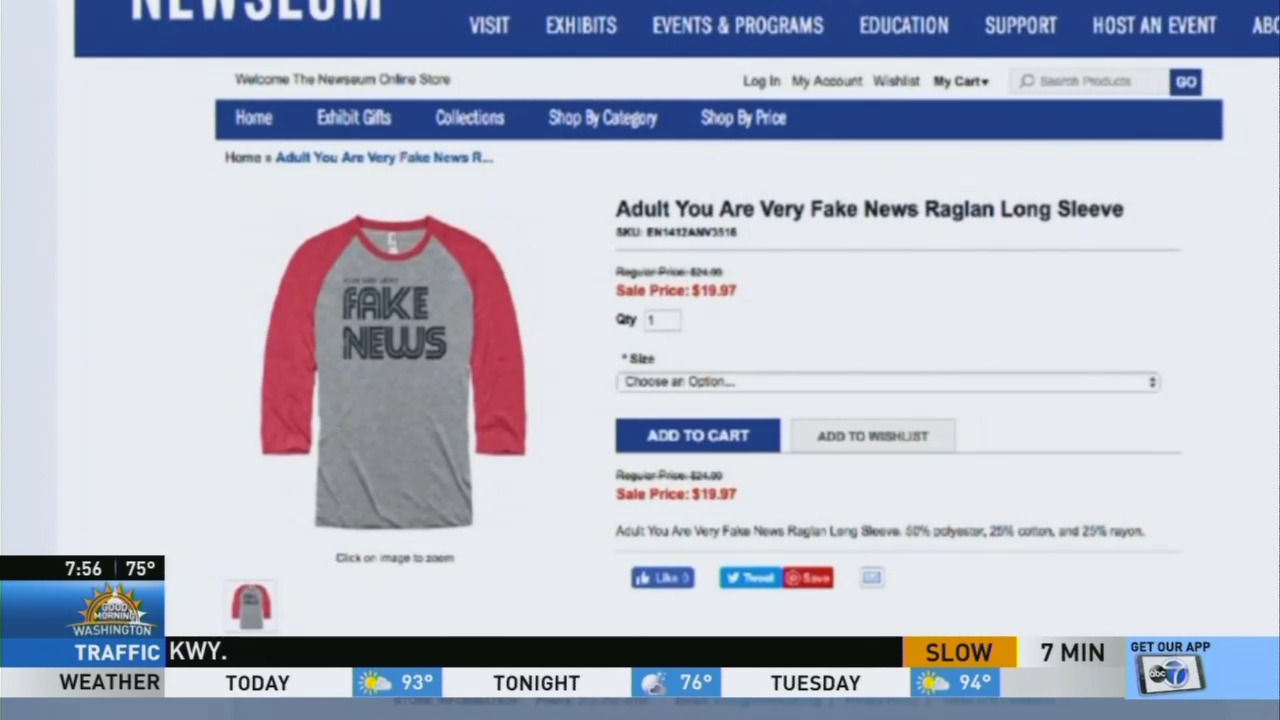 I am offended at the Newseum’s T-shirt.

Take a look right here at this Newseum gift shop’s T-shirt being offered for sale. It is described thusly:

On the shirt itself it defines “Alternative Fact” as follows:

Question. Where does the phrase come from? Answer: It is attributed to Trump White House Counselor Kellyanne Conway, as here in The Washington Post on January 22, 2017. Conway, in response to a question from NBC’s Meet the Press moderator Chuck Todd about a statement from then-White House press secretary Sean Spicer, replied that “Sean Spicer, gave alternative facts to that.” Todd immediately replied:

There is plenty of room for disagreement here. Conservatives aplenty think the denizens of the mainstream media, including The Washington Post and Chuck Todd, routinely deliver themselves of “alternative facts” exactly as Todd has so defined. Falsehoods.

Indeed, the NewsBusters site is chock-a-block with stories of the how the media plays the “alternative facts” game.

For but one example, see this Kristine Marsh story about CNN, MSNBC, ABC, CBS and NBC blacking out on the reports “revealing that (California Senator Diane) Feinstein had unknowingly let a Chinese spy infiltrate her office, working for her as her personal driver for twenty years.”

In other words, those networks quite knowingly hid the truth about a serious news story involving a Democratic Senator and a Chinese spy — a version of “alternative facts.”

But I digress. To the extent people are aware of the term “alternative facts,”, it is, as a simple Google reveals, associated with Trump aide Conway. Which in turn means this t-shirt being sold by the Newseum is a deliberate, highly politically biased swipe at both Conway and the President. Ordinarily, I would say — “so what?” God bless America, free speech and a free press.

There was another t-shirt being sold by the Newseum. An equally political t-shirt. But the target was not Donald Trump or Kellyanne Conway. This time the target was the mainstream media itself and it read simply: “You are very FAKE NEWS.”

The Poynter Institute describes itself as “a global leader in journalism. It is the world’s leading instructor, innovator, convener and resource for anyone who aspires to engage and inform citizens in 21st Century democracies.” The Poynter story did in fact mention that the “museum also sells an “alternative facts” shirt that defines the term as “a false statement delivered with deliberate intent to mislead or to deceive.” There was no reference in the story that the phrase is associated with Conway or Trump.

And unlike the other politically targeted shirt that was a slam at Trump and Conway - neither of whom requested the shirt be withdrawn - there were instant headlines like these:

From The Washington Post:  “Newseum pulls ‘fake news’ shirts after outcry from journalists”

From The New York Times: “Newseum Says It Made a Mistake and Pulls ‘Fake News’ Shirts”

The Newseum in Washington, which caused a stir Friday after reports that it was selling a T-shirt reading “You Are Very Fake News,” announced Saturday that it was pulling the shirts from its gift shop and online store.

“We made a mistake and we apologize,” the museum, which is dedicated to press freedom, said in a statement on its website. “A free press is an essential part of our democracy and journalists are not the enemy of the people.”

“Fake news,” of course, has become a rallying cry for President Trump and his supporters, who contend that the news media presents a distorted view of the president and his administration and fabricates facts. He has repeatedly called the press the “enemy of the people.”

“Real news wins!” was the response on Saturday from Jim Acosta, the chief White House correspondent for CNN. When Mr. Acosta, who has been a frequent target of the president and his allies, heard on Friday about the shirts at the Newseum, he said, “If they’re that strapped for cash, I’m happy to make a donation.”

The Fox story noted the following: “The mission of Newseum, a nonprofit enterprise, is to ‘increase public understanding of the importance of a free press and the First Amendment,’ according to its website.

Okay. That being the case, why in the world would the Newseum pull a t-shirt that is a literal, wearable sign of “a free press and the First Amendment” — when proudly selling another that is a deliberate swipe at the President and Conway?

The answer, of course, is that journalists themselves took offense - and complained.

Among those tweeting negatively about the shirts according to The Washington Post were:

Which is to say, as so many Americans have come to realize, the “mainstream” media is not the defender of free speech and a free press as they so ardently and decidedly situationally pose. They could care less about a t-shirt that slams Trump and Conway — but a Tee Shirt that slams them? Eeeeeek! Get the smelling salts! And remove it this minute!!!! Campaigns to take this or that conservative personality off TV or radio? Three cheers! A presidential slam as fake news? Unacceptable! A threat to democracy.

What we have seen in this little but very telling dust-up at the Newseum over a silly t-shirt is as simple as it is plain. When it comes to the subject of a free press and free speech, the mainstream media rule is plain:

Free speech and a free press for me — but not for thee.

And alas, the Newseum, throwing its self-stated mission to the prevailing liberal media winds, agrees.