WashPost: RNC ‘Trying to Disgust You,’ Abortion Is ‘Banal’ 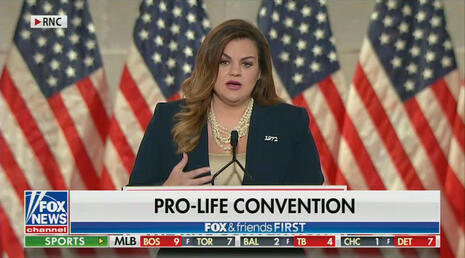 Johnson (pictured right) is a former Planned Parenthood director turned pro-life activist whose story about quitting the abortion industry after witnessing an ultrasound abortion on a 13-week-old preborn baby was told in the 2019 motion picture Unplanned. At the RNC, she shared the details of that moment: “Nothing prepared me for what I saw on the screen – an unborn baby fighting back, desperate to move away from the suction.”

Pro-abortion activists were aghast that the stark realities of abortion that they so fastidiously try to hide were given a national primetime audience, with Hesse huffing on August 26 that it was “one of the more audacious attacks on reproductive rights ever to appear at a political convention.” In fact, the headline to her article read, “Trying to disgust you is the only move the Republican convention’s antiabortion speakers have left.”

Hesse complained, “She described the incident in dramatic terms: ‘The last thing I saw was a spine twirling around in the mother’s womb before succumbing to the force of the suction,’” but didn’t dispute the gut-wrenching description other than to note that pro-abortion activists have tried to cast doubt on Johnson’s story.

She seemed to especially chafe at the “ludicrous” suggestion that abortion has a smell, citing her experience “[a]s a reporter covering women’s health care” who has “witnessed at least 20” abortions, but still conceded: “There is a generic medical odor, chemicals and perhaps a whiff of blood, but nothing unique to the procedure.” …so, there IS a smell.

In her speech to the nation, Johnson spoke of “the Products of Conception room in abortion clinics, where infant corpses are pieced back together to ensure nothing remains in the mothers” and how they “joked and called it the ‘Pieces of Children’ room.”

Hesse affirmed this happens but tried to spin it as a good thing:

As for one of her other seemingly horrifying claims, that doctors piece together fetal remains to make sure the abortion is complete — that’s true. But it’s not some ghoulish jigsaw puzzle done on a lark. It’s because an incomplete abortion could be dangerous to a patient’s health, and abortion doctors care about women’s lives. [Emphasis in original]

But Johnson never claimed this practice was done for no reason and Hesse completely misses the point – it’s not just a “clump of cells” as pro-abortion activists claim but a tiny human body with identifiable parts that is torn up in an abortion procedure, aka “pieces of children.”

And, yet, she claimed, “Johnson had to describe abortion as a horror show because the alternative would have been too banal to achieve the effect she desired,” and that “Americans are no longer as scandalized by the concept of abortion as they once were.”

Abortion is not banal and if Americans aren’t scandalized by abortion it’s because the truth of what happens during them has been covered up with euphemisms and dehumanizing language about the unborn, like dismissing them as “products of conception,” “a clump of cells,” or “fertilized eggs.”

Despite Hesse's protestations, abortion is a horror show and, on Tuesday night, millions of Americans learned why.