Irin Carmon, a former Washington Post contributor and fierce abortion supporter, found a novel angle from which to attack the urprise hit pro-life movie Unplanned, “A Hit Anti-Abortion Film Is Inspiring Real-World Harassment.” No, it isn’t -- and if it is, Carmon failed to present any evidence to support that headline under her story for New York magazine’s “Cut." Carmon relied on other left-wing journalists to make her case and to assure readers Johnson was lying

On Wednesday's Full Frontal show on TBS, late-night "comedian" Samantha Bee began what is allegedly a comedy show by railing against recent efforts to curtail abortion, including both the passage of heartbeat laws to protect unborn babies, and the recently released film Unplanned recounting a former Planned Parenthood employee who turned pro-life.

NPR's All Things Considered on Thursday zeroed in on a pro-life organization that tries to get the employees of abortion facilities to end their participation in the killing of unborn babies. Despite the surprising attention on former Planned Parenthood manager Abby Johnson and her group, And Then There Were None, the public radio program still inserted slanted language into their report. Sarah McCammon labeled the organization an "anti-abortion group." McCammon later noted that Johnson has "gradually been embraced by the anti-abortion rights movement."

On Tuesday, Harris County's prosecutor in Texas dropped the remaining criminal charges against David Daleiden and Sandra Merritt of the Center for Medical Progress. This ended a clearly politically motivated attempt to turn the tables on the pro-life heroes who showed that Planned Parenthood was trafficking in fetal body parts for compensation.

Predictably, the Associated Press did not handle the news well, essentially claiming that the CMP pair weren't prosecuted because of a "technicality," and continuing the myth propagated by Planned Parenthood by presenting as a supposedly indisputable fact that "The organization has said it never has and never would sell fetal tissue."

Earlier today, I noted that Los Angeles Times reporter Maria L. La Ganga compared the heroic undercover work done by investigators at the Center for Medical Progress to the 2004 efforts of the Swift Boat Veterans for the Truth. She meant it as a negative, claiming that the Swift Vets' assertions about Democratic presidential candidate John Kerry's service in Vietnam and his antiwar activities after he returned home are "considered by many one of the ugliest, most unfair attacks in recent political memory." She even claimed — knowingly engaging in falsehood, in my opinion — that "the Swift boat claims were later discredited." Sorry, ma'am. The Swift Vets' truths stand tall to this today.

Though the Times Seattle bureau chief doesn't reference it in her writeup, an Associated Press chart contained therein relays a falsehood Planned Parenthood routinely promotes. This one claims that "Abortion is 3 percent of Planned Parenthood Services":

Catching up on an item from last weekend, Friday’s World News on ABC, Saturday’s Good Morning America on ABC, Saturday’s CBS Evening News, and Saturday’s NBC Nightly News all highlighted California Democratic Congresswoman Jackie Speier’s defense of partial birth abortion as a procedure she had herself gone through as she berated New Jersey Republican Congressman Chris Smith for describing the horrific nature of the procedure during a debate over federal funding of Planned Parenthood. The sympathetic treatment of Speier's outrage over having to hear the technique's description contrasts with media eagerness to describe rough interrogation techniques used on detainees in the War on Terrorism during the Bush administration.

These same shows devoted little to no time to showing Smith’s description of the controversial abortion technique or his reading from the book, Unplanned, by Abby Johnson, a former Planned Parenthood clinic director who famously turned against abortion after observing the ultrasound of an abortion as it was carried out. Rep. Smith had given a speech on the House floor that was over eight minutes long. 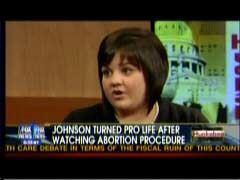 On Saturday’s Huckabee show on FNC, host Mike Huckabee interviewed the former executive director of a Planned Parenthood clinic in Bryan Texas, Abby Johnson, who became a pro-life activist after witnessing an ultrasound of an abortion while she assisted in a procedure. She charged that the abortion provider tries to "increase the number of abortions they do" for the purpose of making money, and described the emotional experience of watching an unborn baby at 13 weeks pregnancy "trying to get away" as its life was being ended. Video of the interview can be found here.

Joy Behar: Profits are the 'Real Immorality' of Abortion

By Colleen Raezler | November 4, 2009 8:45 AM EST
Profits, not the killing of unborn children, are the "real immorality" of abortion, according to "View" panelist Joy Behar.

Behar expressed her unique view of morality during  the Nov. 3 "Hot Topics" discussion about Abby Johnson, a Texas Planned Parenthood director who resigned from her post last month after seeing an abortion on an ultrasound.

Johnson explained to the local Texas CBS affiliate that Planned Parenthood had been pressuring her to focus on abortion, not pregnancy prevention because abortions brought in more money than family planning services.

ABC's "View" host Barbara Walters brought up Johnson's story, calling it "controversial" and Behar quickly denounced Planned Parenthood for making money off abortions. She called it "gross" and "obnoxious" before she stated, "I don't see abortions as a profit-making industry. I think that that is the real immorality of it."

Remember back in July when Norma McCorvey was arrested for disruptive behavior during the confirmation hearings of Judge Sonia Sotomayor? Wait. Maybe not. The networks only gave her a few cursory seconds, if any. McCorvey is "Jane Roe," the plaintiff in the landmark Roe v Wade lawsuit, and the one-time pro-choicer was shouting for the verdict of her 1973 case to be overturned.

If that's all the notice given the most famous side-switcher in the abortion wars, there's little hope that we'll hear about Abby Johnson in the mainstream media. Johnson, a Planned Parenthood director in Texas, resigned October 6 after watching an ultrasound of an abortion procedure.

"I just thought I can't do this anymore," she said. "And it was just like a flash that hit me and I thought that's it."