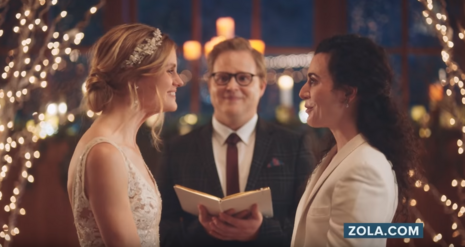 Hallmark is a family-friendly channel no longer, as a recent statement indicates they’ve officially bowed to LGBTQ activists’ demands that their wholesome Christmas movies be made more sexually “inclusive.”

After concern that none of the 40 films Hallmark announced as part of its 2020-2021 holiday lineup included an LGBTQ lead, a representative from the company said some of the movies in its "Countdown to Christmas" and "Miracles of Christmas" programming "will include LGBTQ storylines, characters and actors."

"Diversity and inclusion is a top priority for us and we look forward to making some exciting programming announcements in the coming months, including announcements about projects featuring LGBTQ storylines, characters, and actors," wrote George Zaralidis, the vice president of network program publicity at Hallmark's parent company, Crown Media Family Networks, in an emailed statement. "We are committed to creating a Hallmark experience where everyone feels welcome."

The announcement was met with cheers from the liberal media.

BuzzFeed called the news “long overdue.” Newsweek hopefully reported Zaralidis’s statement “seems to imply there are giant changes coming, ones that could shift not only the standards of the Christmas season, but could make viewers feel accepted and understood, no matter who they are.”

On July 21, TV Guide celebrated: “All we want for Christmas is some LGBTQ representation! And we must have made it onto the nice list this year because Hallmark Channel says that's exactly what it's planning for its 2020 holiday programming.”

IndieWire gave its seal of approval to Hallmark, too, “Giving stories to queer characters would be a huge step in the right direction for the company, particularly as its brand of comfort and warmth remains so vital due to current events.”

LGBTQ activists had groused for years about their lack of representation in the Hallmark Channel’s made-for-TV movies, while Christians and traditional families appreciated the break from the constant gay agenda being forced on television.

It all came to a head last year when the Hallmark Channel aired a wedding ad for Zola that featured a lesbian couple (see image above). Viewers were outraged and Hallmark quickly took down the commercial. Then, soon after receiving liberal backlash, they apologized for removing the advertisement and reversed their decision causing a ruckus that upset everyone. Not content with commercials, the pro-LGBTQ media pressured the Hallmark Channel even more to air a “gay movie” as restitution. Now, it seems, the Hallmark Channel has dutifully complied. Another institution lost to the woke mob.