‘Sick Thing to Say’: Real Housewives Attack Their Own for Defending Kavanaugh 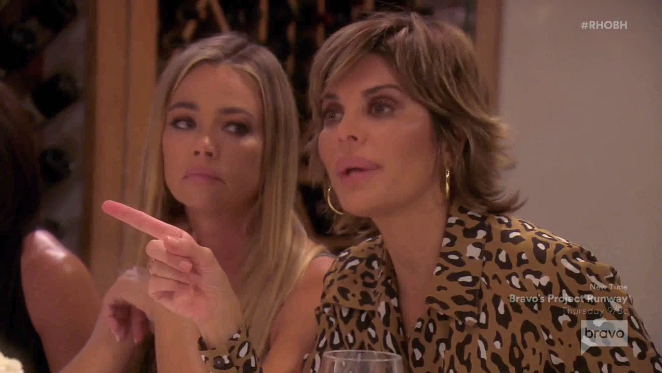 The April 16 episode of The Real Housewives of Beverly Hills, titled “A Supreme Snub,” was recorded back in September during the Brett Kavanaugh Supreme Court confirmation hearings giving the left coast ladies the perfect opportunity to virtue signal their support for his accuser.

The housewives are gathered at a dinner for Lisa Rinna’s 90-year-old mother, Lois, when Rinna bizarrely explains her husband Harry Hamlin’s absence at the dinner as because “it’s a pretty big day politically,” referencing the Kavanaugh hearings. Rinna raves about Dr. Christine Blasey Ford – she repeatedly references the fact that she has the title doctor – saying, “I think she’s changing everything with her courage.”

Teddi Mellencamp Arroyave agrees and the two repeat the usual liberal talking points, but Camille Grammer, who went through a rough divorce with ex-husband Kelsey Grammer, has the courage to argue back. She has been on both sides: as someone who has been wrongly accused publicly, she feels bad for Kavanaugh, and as a sexual assault victim who told people about it immediately, she feels Ford’s story doesn’t make sense.

Of course, the flashbacks inserted all make Grammer look bad, with Bravo TV Host Andy Cohen reading a long list of harsh adjectives used to describe her and Camille seeming to boast about having a “Jesus complex.”

Rinna: The fact that this doctor came out, I think she’s changing everything with her courage.

Grammer: I just have a different point of view on this one.

Richards: What were you saying, Camille?

Grammer: I just have a totally different feeling about it.

Rinna: Why do you totally different feeling about it?

Grammer: She didn’t have enough evidence. When you are gonna go up against the Senate and something like that, you better have your witnesses lined up because that’s a very tough thing.

Arroyave: But isn't that a sick thing to say?

Rinna: Camille, not necessarily. Absolutely not.

Arroyave: No, I do not agree.

Robin: I was attacked when I was in 7th grade. And I have never spoken about it until recently because of the #MeToo movement. So I believe her.

Grammer: I’m a victim, too.

Robin: Did you come out and tell people?

Grammer: I told my boyfriend, I told my mother, I told my therapist. I told people. I didn't hold onto it for 35 years.

Grammer: But she told her husband years after. It doesn't make sense.

Grammer: We don't know if for sure it happened or not because it's a he-said, she-said. This pisses me off!

Arroyave: You don’t think women should be heard?

Grammer: Women should be heard.

Rinna: Do you not believe her for getting up in front of the f—ing world and telling this story?

Robin: And not getting anything out of it, if anything it’s the worst thing that ever happened to her.

Rinna: Nothing! Do you not believe her? Camille, she’s a doctor!

Rinna: Um, not necessarily, but she’s been attacked.

Arroyave: But, Camille, how would you feel right now if I said to you I don’t believe you?

Grammer: That's your prerogative. This woman has some serious allegations, and I feel bad for what him and his family are going through.

Rinna: But the fact that you actually have had this experience I would think you’d be more empathetic to this woman.

Grammer: I am very empathetic to women that have had this, but I’ve also been accused of things that I’ve never done. When I went through my divorce, I was taken down. I was maligned. I was emotionally beaten down… It’s horrible to go through that when you’ve done a lot of good things in your life. I think I’ve helped everybody out here in this hot tub. I have this Jesus complex, I think. I empathize with what Brett Kavanaugh is going through. I’ve been in that position. So I am really impassioned about this, and I know what it feels like to be wrongfully accused and humiliated all over - the country, the world - for lies.

Rinna: Camille comparing herself to Brett Kavanaugh is f—ing weird, I’m sorry. I mean, I know she has the f—ed up sense of herself but it isn’t about you, Camille. This is about a much bigger thing. He’s going to be a judge on our court for the rest of his f—ing life and that is a very big —ing thing.

Later in the episode, we hear how Rinna’s mom, Lois, survived a brutal attempted rape and murder at the hands of a man who went on to become the “Trailside Serial Killer” years later.

Rinna didn’t like Camille comparing herself to Kavanaugh, but she then compares her own mother – who was tied up, stabbed, and beaten with a hammer by a violent sociopath who was sentenced to 7 ½ years in jail for the attack against her – to Ford, who came forward 35 years later with a story about being jumped on and groped as a teen, without enough evidence to pin down a location or date, never mind have police bring charges.

Rinna: Because my mom didn’t tell me for so many years, seeing Dr. Ford get run through the ringer touches me in such a deep way. It takes so much courage to come forward. I think the least we can do is show these victims some compassion.

This has become a common tactic on the left, to act as though not believing Ford’s story now decades later is the same thing as not believing a bloody, injured rape victim right in front of you immediately after the crime.

But it was nice to see at least one reality TV housewife who refused to read from the Hollywood script.