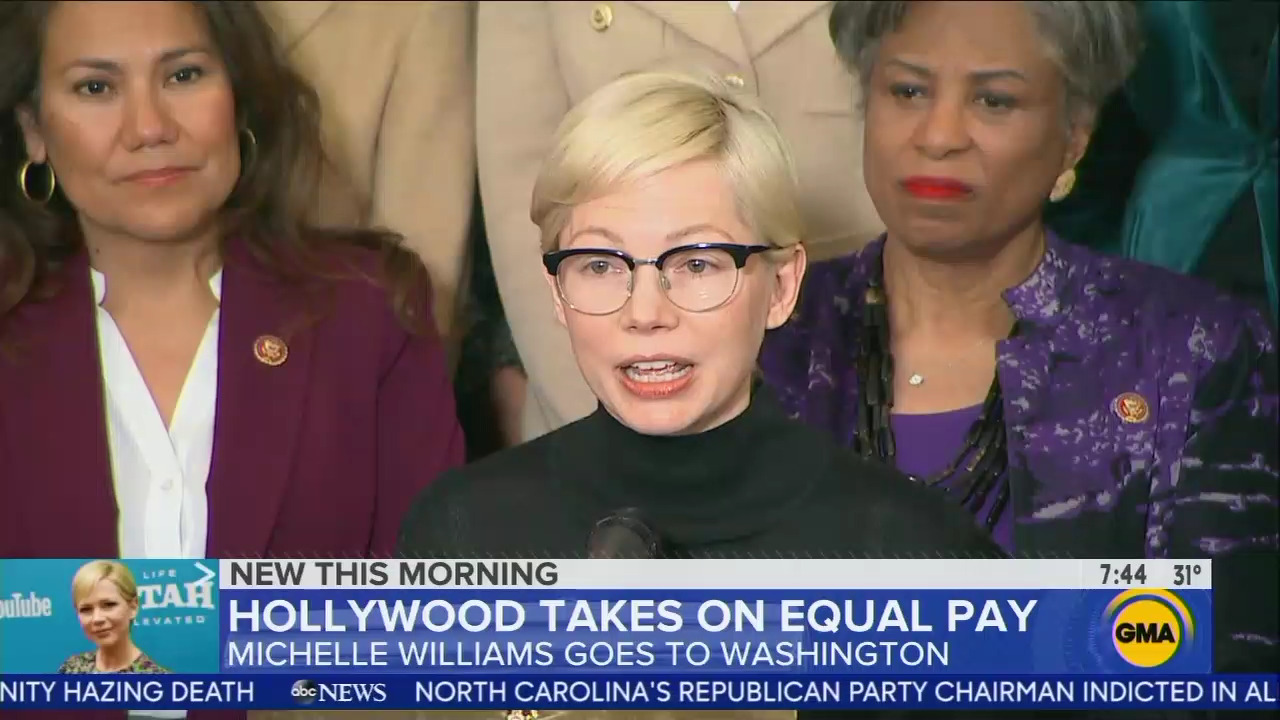 Equal Pay Day, supposedly how far into the year women must work to earn the same amount men made the previous year, fell on April 2 this year (8 days earlier than last year) and of course Hollywood was all over it.

The Hollywood organization Time’s Up is selling t-shirts that say "Time's Up Pay Up" at 40 bucks a pop to spread the word on Equal Pay Day. Time’s Up is also teaming up with NowThis to release a series of videos, starting with one featuring California “First Partner” Jen Siebel Newsom.

Actress Michelle Williams joined Speaker Nancy Pelosi at a rally on Capitol Hill for the Paycheck Fairness Act. She spoke about the time her agent infamously only got her an $80 per diem while her co-star Mark Wahlberg got $1.5 million to reshoot scenes in their movie after Kevin Spacey was dropped from the production. Of course, this was treated as the ultimate sexist injustice, epitomizing the plight of all women in the workplace.

How bad have things been in Hollywood? Williams seemed awed by the newfound respect, “Rather than being grasped too tightly or hugged for too long at the morning meeting my hand was shaken and I was looked squarely in the eye as I was welcome to my Monday morning … I realized this is actually what it feels like to be on the inside, to be one of the boys.”

Williams struck a practical note, arguing that women who are paid the same as their male peers are more productive workers. "Imagine a workplace where women don’t have to spend any energy fighting for fair pay or defending their rights and can instead focus that energy on the fullest expression of the task at hand and enjoy . . . fair and equal compensation for every woman.”

I guess Williams thinks it unfair that she should have to expend the energy to find an agent who will work hard on her behalf and negotiate fair pay; she wants it all to just fall into her lap. But it’s negotiation that benefits women – we are more willing to trade pay for more flexible hours and time off than men.

In fact, this is why the so-called gender gap exists. Feminists claim that women are only paid 70 to 80 cents for every one dollar men are paid, but that’s only when you compare unequal work - the gap closes when you take things like hours, experience, or safety into account.

Women also don't ask for raises like men. An upcoming Netflix show called Tuca & Bertie put out a crass promo in honor of Equal Pay Day declaring, “Smash the pecking order,” and actually makes this point. Bertie (Ali Wong) declares she wants a promotion, but when asked if she’s going to talk to her boss about it she weakly just replies, “I’m the most qualified…”

Tuca (Tiffany Haddish) responds, “So you’re just gonna hope your boss reads your mind and gives you what you want?!”

Hollywood loves to repeat the wage gap myth on the small screen. Freeform's Good Trouble, CBS's The Neighborhood, The CW's The Flash, Showtime's Shameless, NBC's Superstore, and CBS's Superior Donuts have all had lines about gender pay equality in the last year or so. Hollywood is at least one place where the wage gap still exists.