You’ve probably heard already. April 10, was “Equal Pay Day,” a symbolic day media, politicians and celebrities use each year to complain about gender-based pay discrimination — by abusing a statistic that does not illustrate that.

The media’s reporting on the day was even worse since it’s their job to critically examine talking points for accuracy. A recent survey by a company that analyzes compensation found women made only about two cents less per dollar when actually comparing similar men and women working in similar positions. Other researchers found less than a one cent difference.

USA Today sided with Equal Pay complainers writing, “Why #EqualPayDay matters, and what it says about women at work.” It included no explanation or criticism of the misleading statistic. Money magazine’s online headline declared “Women Have Pushed for Equal Pay for Decades. It’s Sad How Little Progress We’ve Made.” Money article acknowledged “a host of factors contribute to the gender wage gap,” but failed to explain how misleading the 80 cents on the dollar stat really was.

Left-wing media outlet The Daily Beast whined that “Women Won’t Have Equal Pay Until 2058.” The headline and top of the story promoted research based on even worse figures of 70 cents on the dollar, before admitting the stat was “contentious.” They wrote that “detractors argue” various choices explain the wage discrepancy and admitted “studies that do take these conditions into consideration narrow the gap.” But ultimately the story still argued that women are unfairly disadvantaged in the workplace. 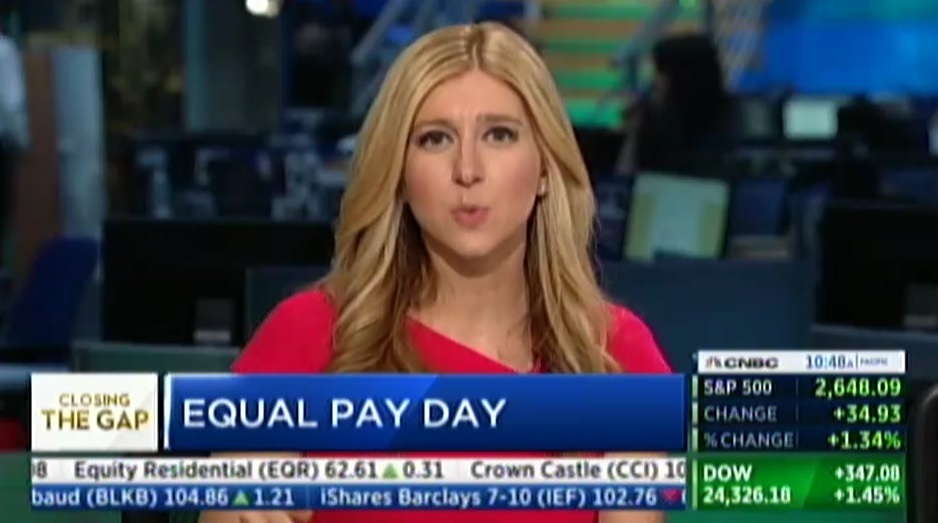 CNBC aired multiple segments under the “Closing the Gap” banner throughout April 10, including an interview on Squawk on the Street with Lean In President Rachel Thomas who repeated the 80 cents statistic. Co-anchor Sara Eisen asked for a definition of “equal pay” for equal work, but the CNBC team accepted Thomas’ reply that “it doesn’t matter how you slice these numbers women are paid less.”

Nowhere in the interview did Thomas admit that when you control for as many factors as possible to create an apples-to-apples comparison the gap shrinks to almost nothing.

Liberal Sens. Kamala Harris and Bernie Sanders both proved that the statistic was being used to argue that statistic represents “equal work” and being paid 20 percent less was the result of discrimination, even though that’s a left-wing myth.

Harris Tweeted “It’s time to make equal pay a reality in America.” A video accompanied those words citing the 80 cents on the dollar statistic and declared, “Let’s remember that our fight for equality is not over — women deserve equal pay for equal work.” The video had more than 19,000 views.

Sanders tweeted on April 10, “It's not a radical idea to say that women should get equal pay for equal work and the same economic opportunities as men. This is an issue of basic justice. #EqualPayDay”

The Facts About Equal Pay Day

American Enterprise Scholar and economics professor Mark J. Perry pointed out that one huge difference between men and women was men’s willingness to work in dangerous jobs. Danger and risk were often compensated through higher pay. Perry showed that the top 20 most dangerous occupations are massively male-dominated, whereas women outnumber men in “relatively low-risk industries.”

So what happens when economists or researchers actually look at similar positions and employees? That so-called gender pay gap practically disappears.

Business Insider columnist Daniella Greenbaum brought some much needed perspective to the matter on April 10. Her column, “It’s Equal Pay Day — and the wage gap is better than everyone thinks,” was a sharp contrast to many news stories and tweets railing against gender discrimination.

She cited an online survey conducted by PayScale. More than 2 million people took the online survey and provided many kinds of information that PayScale used “to provide insights in the controlled and uncontrolled gender wage gap.”

Guess what they found?

“When PayScale compared similar men and women working in similar jobs, the gender pay gap shrunk and nearly closed. PayScale found that women earned an average of 98 cents on the dollar,” wrote Greenbaum at Business Insider. Greenbaum argued it would be more useful to train women in negotiation.

That means, when the data is (as closely as possible) more accurately assessing equal work — the pay disparity is roughly two cents on the dollar. That two cents might represent some kind of discrimination, or it may not.

NBC News online published a story on April 10, about the “obstacles” in the way of “real progress for pay equality” and advising various kinds of action. But ironically, it included a quiet admission that the gap may be even smaller than 2 cents.

Citing the Korn Ferry’s Gender Pay Index once the comparison was evaluating the same job levels, within the same companies and including the “same level of work and the same function” — “the gap falls to 0.9 percent.”

NBC’s story was astonishing proof that even when the liberal media are aware that the size of the supposed problem is a mere fraction of what activists and politicians are claiming, they’ll promote the left’s agenda anyway.