ABC’s Scandal just aired what was in effect a one hour long commercial for Planned Parenthood and boy are they grateful for the lies that were just spread on their behalf to millions of viewers!

The episode “Baby, It’s Cold Outside” has former First Lady turned junior senator from Virginia, Mellie Grant, filibustering on the floor of the U.S. Senate because she doesn’t think Planned Parenthood gets enough taxpayer money. You see, it’s not enough that the spending bill in question fully funds PP this year, she wants to guarantee that they never lose funding for all eternity.

But wait – the absurdity doesn’t stop there!

Here are the top 5 most ridiculously over-the-top Pro-Planned Parenthood propaganda scenes in this week's episode of Scandal, in chronological order:

1. The opening scene sets the tone, it is all sleazy and you finish watching feeling like you need to take a shower. It’s shot so it looks like a boys club, the men pouring each other scotch while the little miss begs for her money and the condescending man pats her on the head and tells her what to do, while the other men all laugh at her... So you know, of course, that Mellie is going to hit back hard in some triumphant strike for women against the patriarchy!

-Sen. Gibson: Catching a flight home just as soon as we, uh, vote through that spending bill.

-Mellie: Which is the reason for my visit. I found a mistake. Seems funding for Planned Parenthood has been put under the discretionary column.

-Mellie: True. But if it's moved to discretionary, then that money could be taken away at any time, in future spending bills—

-Sen. Gibson: It's funded. Nothing in this bill says otherwise.

-Sen. Gibson: That bill will pass just fine without you, Mellie.

-Mellie: I'm sure there are others... When they find out, they'll agree with me.

-Sen. Gibson: I have never brought a bill to the senate floor without knowing how many votes I need to pass it, and this one is no exception. That's what makes me so good at my job. And you know what's gonna make you good at your job? Voting yes on this thing. Then we're all gonna go home. Have ourselves a merry little Christmas.

Shockingly Hollywood has no idea how the federal budget works. Of course funding for Planned Parenthood is under discretionary funding. It wasn’t “moved to discretionary,” it has always been there and always will. It’s not enough for PP to be funded, Mellie wants it to be permanently guaranteed?! Mandatory spending is for things like Social Security and Medicaid, not Title X programs. Welcome to liberal La La Land where Planned Parenthood should be an entitlement program.

They could have made it a simple story of her filibustering a bill that defunded PP instead of making all this stuff up. But I guess when you’re supporting Planned Parenthood, being factual takes a backseat to being hysterical.

2. Pouty after being talked down to by Sen. Gibson (she later admits, “I don’t even know why I’m doing this, I’m a Republican. I just don’t like Gibson telling me what I can’t do), Mellie suddenly decides she’s gonna filibuster the bill.

-Chairman: The chair recognizes the junior senator from Virginia.

-Sen. Gibson: What the hell is this? [ Senators murmuring ]

-Mellie: So, here's the thing. This bill keeps the lights on, and I'm all for that, just not when it means hurting people in the process.

-Mellie: I have the floor. You say we're not defunding Planned Parenthood, and technically you're right.  But by making that money discretionary, you give the people in this room the power to say, "You know what? We're a little over budget this year. How about we don't give that little ladies' organization the full amount they're asking for?" So you don't. And then, next year, you give them even less, and even less the year after that, and you keep chipping away at their budget until, before you know it, Planned Parenthood no longer exists. [ Exhales sharply ] So, as much as I would like to get home for the holidays, I refuse to do it at the expense of women's health. So...

I would LOVE it if “Planned Parenthood no longer exists!” Unfortunately, the abortion behemoth will survive without government funding, but at least it would with live on without my tax money subsidizing it.

Again, the fact that she’s not satisfied with it being fully funded and wants it to be an entitlement program boggles the mind.

3. Mellie continues her meaningless filibuster with some non-sequiturs.

-Mellie: 38 million women living in this country are in need of contraceptive care. 20 million of those women depend on government services to provide them birth control because they are under the age of 20 or are living below the poverty line or both. But we're gonna have to say, "Sorry. We can't help you." And when they ask us why, we can tell them. It's because we have to allocate... $1.24 million for tree-snake control in Guam... Or [exhales sharply] $10,000 for talking urinal cakes in Michigan. $331,000 to study "hangry" individuals.

And we wouldn’t be telling those women, “Sorry, we can’t help you,” we’d be redirecting them from the 800 Planned Parenthoods to the 9,000 Community Health Centers. Or they can continue to go to PP, it will still exist without our taxpayer dollars.

Fun fact: Every pork barrel project that Mellie reads, like the Guam tree-snake control, talking urinal cakes, and hangry studies is real. I’d give them points for that, but even the truth is buried amidst a pack of lies. Mellie begins by saying, “I'd like to tell you about the thousands of federal projects that aren't discretionary” – but they are discretionary spending! I wish that Hollywood would write a script on simply cutting spending, not using outrageous examples of government waste to justify MORE unnecessary spending.

4. Here comes the bumbling Vice President Susan Ross (another supposed Republican) to save the day to ask a long question and relieve Mellie so she can duck out to go to the restroom.

-VP: Will you yield the floor to me so that I may ask a lengthy question about the multitude of services Planned Parenthood provides?

-Mellie: I yield for a question from... Vice president Ross. Ugh.

-VP: Now, I'm not up here to ask you about abortions, senator, which, as you know, only makes up 3% of all Planned Parenthood business. I mean, I could, but I won't. Let's talk about gonorrhea!

I can’t believe they’re still peddling that worthless “only” 3% of what we do is killing people stat. To say abortion takes up 3% of their services, they count each abortion against each pregnancy test, STD test, dispersal of contraceptives, etc. As Rich Lowry says about the 3% lie, “Major League Baseball teams could say that they sell about 20 million hot dogs and play 2,430 games in a season, so baseball is only .012 percent of what they do.” It’s ridiculous! No matter how you skew the statistics, 330,000 human hearts stopped beating at the hands of Planned Parenthood.

5. Finally Mellie has made it to the finish line and successfully filibustered the bill.

-Mellie: I'm sorry that I had to resort to theatrics to protect what should be basic human rights. But all of you that stuck with me to the bitter end should be proud. Because of your sacrifice, millions of women across this nation get to enjoy their holidays without having to worry if they will have access to proper healthcare in the coming year.

The best news coming out of this episode is that they didn’t pile on with the Planned Parenthood provides mammograms lie. Not that they realize it’s bunk, they probably just didn’t have time.

Thanks to @shondarhimes for standing with Planned Parenthood & for being groundbreaking creator! #Scandal #StandWithPP

Thank you @shondarhimes for bringing this incredibly important issue to the bajillion people watching. #Scandal

Oh, and by the way, while all this crap was going on, the lead character of the show, Olivia Pope, was randomly (we didn’t even know she was pregnant) out getting an abortion set to the tune of “Silent Night.” Seriously. 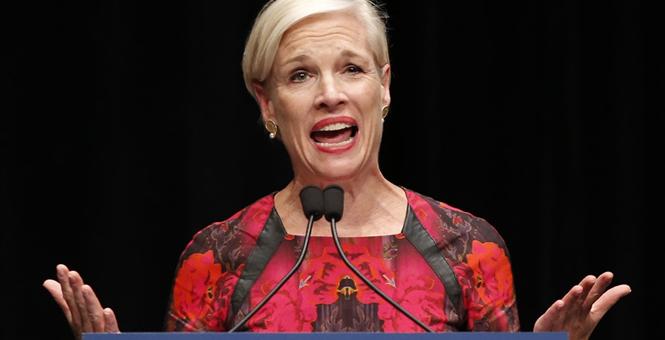