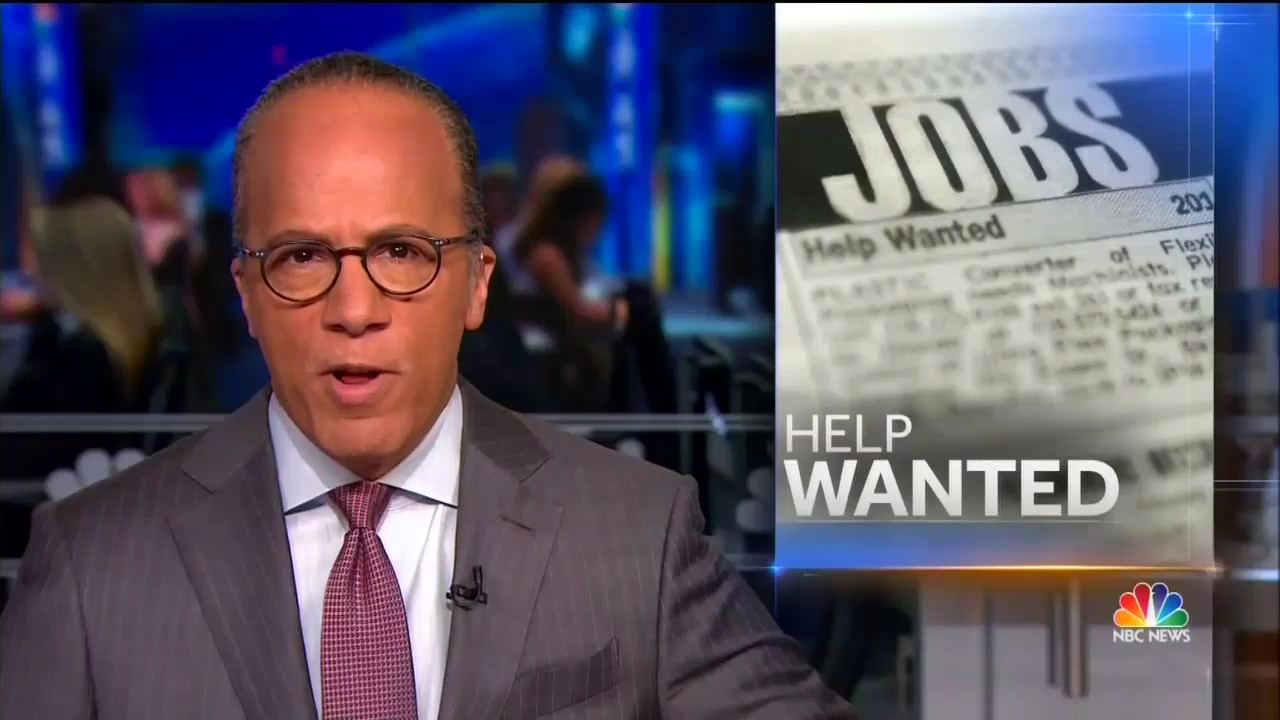 February job gains came in at a whopping 313,000 new jobs, so much that NBC Nightly News anchor Lester Holt acknowledged it “blows away economists’ expectations.” The Wall Street Journal said expectations were at only 205,000. Unemployment also remained at the 17-year-low of 4.1 percent. But only one of the big three networks gave the good news any serious attention.

In spite of a jobs report that U.S. News & World Report said was the “single best month since mid-2016,” both Nightly News and World News Tonight failed to do a full story on the jobs situation. Those shows chose to include fairly short anchor reads of the numbers, spending 15 seconds (Nightly News) and 24 seconds (World News Tonight) respectively.

Hobson told CBS viewers “the fundamentals are very strong right now in our economy, and all indications are really solid.”

Axelrod told viewers “the latest fuel for optimism,” was that day’s jobs report which showed the most construction jobs gains in 11 years, and strong hiring in retail and financial services — the “largest increase there since 2005.”

He also cited the impact of the corporate tax cuts and “regulation rollbacks.” Hobson backed him up saying the “benefit” of the tax cuts were “being felt by American businesses, and then as a follow on effect by American workers.”

World News Tonight pointed out another piece of good news. There were more than 800,000 people who joined the labor force in February, the most since 1983. But none of the three news programs reported the revisions calculated by the Bureau of Labor Statistics. The BLS upwardly revised December and January jobs figures by 54,000 jobs combined. So the March 9, report actually reflected a gain of 367,000 jobs overall. 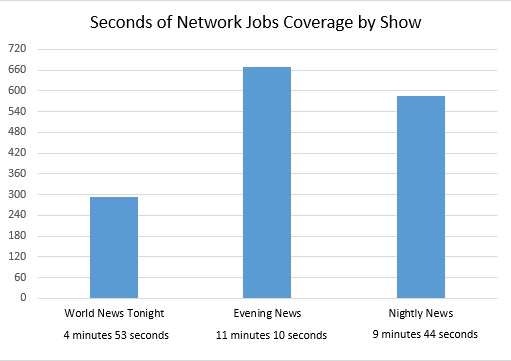 World News Tonight spent just 4 minutes and 53 seconds combined on jobs those nights. Nightly News spent almost twice that with 9 minutes and 44 seconds, while Evening News devoted the most time to the subject those nights with 11 minutes 10 seconds of reporting.

Of the two evening news programs on Spanish language channels, Univision and Telemundo, only one reported the latest unemployment report.

The evening news at Univision chose not to inform their audience at all about the jobs surge and historically low unemployment. However, Univision's chief rival, Telemundo, in sharp contrast, highlighted the news at the top of its newscast. In a 48-second report on the subject, Telemundo anchor José Díaz-Balart noted that "all this data confirms the economy is growing and with numbers now close to full employment."

Methodology: MRC Business has been tracking the amount of time spent on jobs or employment news on the Friday of each month that the Commerce Department’s Bureau of Labor Statistics announces the latest data. This time tally only reflects the ABC, CBS and NBC evening news broadcasts on those specific nights.