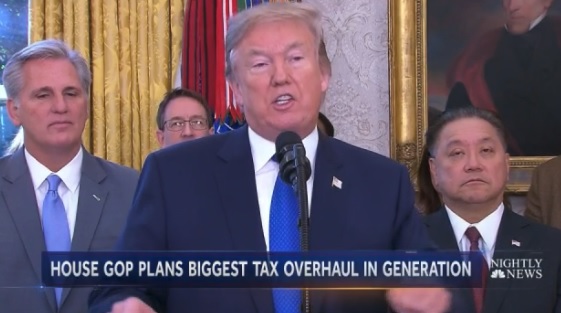 A majority of Americans now support the tax reform package passed by Congress and signed into law by Donald Trump just over two months ago. Just don’t expect the media to tell you about it.

A recent New York Times poll conducted by Survey Monkey between Feb. 5, and Feb. 11, found 51 percent of respondents now approve of the tax bill — a large increase from 37 percent approval in December. The Times publicized the poll on Feb. 19, in the article “Tax Overhaul Gains Public Support, Buoying Republicans.”

“Public opinion is moving in the direction of this bill,” chief research officer for SurveyMonkey Jon Cohen said in the article. “Considering where it was, it is dramatically different.” But that wasn’t how other liberal media portrayed it.

Both traditional news media and left-wing outlets did their best to ignore, undermine or downplay the poll’s good news for the GOP and the White House. ABC, CBS and NBC evening news programs said nothing about the poll on Feb. 19, while MSNBC’s Morning Joe portrayed it as the result of an effective messaging campaign on Feb. 20.

Around the same time as the NYT poll, Politico released findings of a February poll which asked several questions about the tax bill. One questions was whether people noticed an increase in their paychecks. Fifty-one percent said no, a point many liberal outlets grabbed onto, but the demographic data showed 26 percent of the respondents were retirees, 7 percent were unemployed and 4 percent were students.

Morning Joe co-anchor Mika Brzezinski admitted, “The Republican tax plan has seen a surge of support from Americans.” Fellow anchor Joe Scarborough turned to Peter Baker of The New York Times to say “Republicans have done a great job on this,” referring to Trump’s efforts to tell people what the tax bill has done.

Baker replied, “Look, Donald Trump is, if nothing else, a successful salesman, right? And what he has sold is this idea that the economy is doing really well and that you should feel good about things. And the truth is that, the economy’s doing OK. It’s doing roughly the same as it was during the last couple years under President Obama, but Obama was always much more reticent about selling it.”

Online liberal outlets also undermined the new poll, but in different ways. Slate did it by leading with negative polling info from Politico, and burying the Times’ polling data later in the story. Salon complained on Feb. 21, that “Americans don’t think the GOP’s tax bill is really helping them: poll.” Salon’s story publicized the Politico poll, which showed less approval for the legislation, and claimed a majority of people “have not seen” the impact of tax cuts in their paychecks, but failed to cite The Times poll in the same story.

The Salon piece focused exclusively on the Politico/Morning Consult poll and said, “After Trump’s State of the Union address last month, the bill had a slight surge in popularity across some polls, but overall, Americans haven’t bought into it.”

They also promoted that poll’s claim that “less than a majority, 45 percent, currently support the law,” while ignoring The New York Times’ recent findings.

Left-wing Vox also promoted the Politico findings in their headline, and put the Times’ poll in a final subsection of the story below ads and embedded tweets. Even then, the subheadline minimized the news saying “The tax bill is getting more popular, little by little” and claiming it was “creeping up in popularity.” Rather than let The Times poll stand alone, Vox made sure to include an older Monmouth poll and the Politico poll which both showed lower, even “stagnate” approval of the tax bill.

“Americans Haven’t Noticed Trump’s Tax Cut in Their Paychecks. That’s Probably Because There Isn’t Much To Notice,” Slate declared on Feb. 21.

After emphasizing skepticism of the legislation, Slate wrote, “And while the bill does seem to be getting more popular, most voters still say they haven’t noticed any personal benefits.” They cited the NYT poll, but erroneously claimed it only showed “support is up to 50 percent” (the poll showed 51 percent).

In the following paragraph, the Moneybox columnist Jordan Weissman once again undercut that increased support for the bill saying, “Still, the vast majority of adults don’t seem to have sense the effects of the tax cuts on their personal finances.” He then proposed a “theory” that the “tax cuts is just way too small” for many people to notice.

While many liberals sought to downplay the increasing “popularity” of the tax bill, The Washington Post reported on Feb. 27, that in Indiana that “tax-cut gratitude illustrates hurdle for Democrats in 2018 midterms.”

The Post noted that the “spate of recent polls that show public opinion turning in favor of the tax legislation” leaves Democrats “the unenviable task of trying to convince voters that a law increasing their paychecks now will be bad for the country later.”