Disgruntled New York Times economist Paul Krugman is clearly willing to sink his career further into the reputational abyss by mudding semantics to save President Joe Biden’s hoax that we had zero inflation in July. 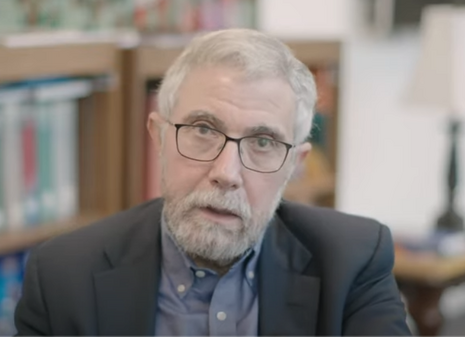 The failed “Team Transitory” apologist Krugman published a new op-ed spinning that “President Biden declared, accurately, that we had zero inflation in July.”  He whined that “many on the right accused [Biden] of lying, because prices in July 2022 were 8.5 percent higher than they were in July 2021. Do they not understand the difference?” To be “fair, sloppy business reporting may have contributed to their confusion,” Krugman wrote.

Krugman touted the unchanged month-to-month inflation figure, and pontificated that he saw “many headlines to the effect that ‘inflation was 8.5 percent in July,’” before proceeding to spew nonsense at conservatives for their supposed ignorance of Krugman’s gaslighting. “The more fundamental issue, surely, is that it’s difficult to get people to understand something when their sloganeering depends on their not understanding it,” Krugman griped.

Apparently Krugman doesn’t understand that the month-to-month rate means that the “rate of inflation” in July was unchanged, not that there was “zero inflation in July.” Even anti-Trump pollster Frank Luntz called such gaslighting on inflation "a destruction of the meaning of words."

Krugman even monikered the unchanged month-to-month rate figure as the “Big Zero,” which he contradictorily admitted “doesn’t mean that the inflation problem is solved.” He even babbled in his first paragraph: "This is not the end of inflation. It is not even the beginning of the end. But it is, perhaps, the end of the beginning." So how could there have been “zero inflation in July” if there is still an “inflation problem” to fix, Krugman? Brownstone Institute President Jeffrey Tucker lambasted the asinine play on semantics being pushed by Biden and company. “It's a bogus math trick,” Tucker tweeted. “This is the overall one-month index change. Overall that means that the big drop in fuel oil and gas (following previous massive monthly increases) swamped the huge increases everywhere else.”

Using the same tactic, you could also observe a one-month 19.2% increase in electricity! But of course we would not do that because that's dumb. The actual increase is 15.2% which we get from calculating year over year, just as the DoL does! grrrrr. Here's the breakdown. pic.twitter.com/Lvmes1zEVw

Tucker is right on point. For example, “[t]he food at home category, which tracks the cost of groceries, surged 13.1% over the last year, the most significant increase since March 1979. On a monthly basis, prices jumped 1.4%,” according to Fox Business. Tucker said that one could use Biden and Krugman’s same tactic to “observe a one-month 19.2% increase in electricity! But of course we would not do that because that's dumb. The actual increase is 15.2% which we get from calculating year over year, just as the DoL does! Grrrrr.”

Krugman undercut himself further by admitting a variety of core inflation measures indicate the economy is still “running too hot,” which is literally the opposite of “zero inflation.”

Economists have long known that you get a much better read on underlying inflation if you strip out highly volatile prices — normally food and energy, but there are a variety of measures of core inflation, and all of them are still unacceptably high. That’s a clear indication that the economy is running too hot, [emphasis added.]

Krugman strangely claimed in the beginning of his latest drivel that “[T]here is absolutely no reason to question the numbers.” In fact, said Krugman, he expected the GOP “to accuse the Biden administration of cooking the books.” It’s hilarious that Krugman expected the GOP to accuse Biden of “cooking the books.” He literally did the exact same thing when he absurdly claimed in 2020 that it was a “possibility” that the Trump administration had “gotten to the BLS” to fudge a May 2020 report that showed employment rising a whopping 2.5 million during the COVID-19 pandemic economy.

Conservatives are under attack. Contact The New York Times at 800-698-4637 and demand it continue to distance itself from Krugman’s spin on inflation.