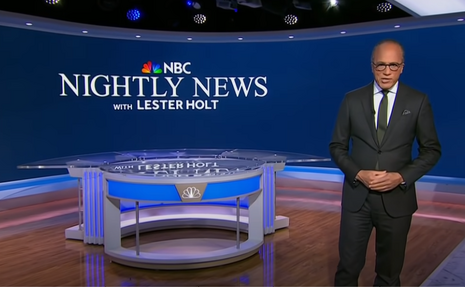 Powell stated during a press briefing Dec. 15 that “[O]ne of the two big threats to getting back to maximum employment is actually high inflation.” This is a seismic shift away from the Powell Fed’s repeated false assertions over this year that skyrocketing inflation would only be temporary. The Fed is expected to institute thee rate hikes in 2022, according to Bloomberg News.

In response to Powell’s statement, Raymond James Financial Chief Economist Scott Brown said, “‘The Fed is seeing inflation broadening out and people are hearing about inflation on the nightly news -- inflation, inflation, inflation. The Fed is worried about that.’” Perhaps Brown didn’t watch NBC last night. Both ABC World News Tonight and CBS Evening News covered the report during their Dec. 15 broadcasts, but NBC Nightly News was nowhere to be found, ignoring the story entirely.

Both the Consumer Price Index and the Producer Price Index — core indicators for U.S inflation — skyrocketed 6.8 percent and 9.6 percent, respectively, to shatter records in November.

This is not the only bad news that NBC chose to ignore last night. It was clear yesterday that Senate Democrats will likely not have the votes in the Senate to get President Joe Biden’s “Build Back Better” bill passed before Christmas and the start of an election year. Nightly News was one of multiple networks that chose to bypass coverage of the political mortality of President Joe Biden’s “Build Back Better” farce.

Powell’s comments also came after NBC Senior Business Correspondent Stephanie Ruhle attempted to gaslight Americans about the inflation threat. Ruhle claimed during the Nov. 14 edition of NBC’s Sunday Today that “the dirty little secret here, Willie [Geist], while nobody likes to pay more, on average we have the money to do so.” That's easy for her to say, since her net worth currently sits at around $6 million, according to Market Realist.

NBC Nightly News’s recent display of journalistic malfeasance should erase any doubt of the network’s agenda to shield Biden from bad coverage that could hurt his political image.

Conservatives are under attack. Contact NBC News at (212) 664-6192 and hold the network to account for ignoring Powell’s major flip-flop on inflation last night.