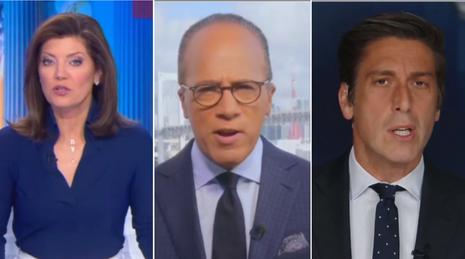 The ABC, CBS and NBC evening networks didn’t seem to care that President Joe Biden canceled the Keystone XL while behaving like a Russian crony and approving the country’s controversial Nord Stream 2 pipeline.

CNBC reported July 21 that the United States and Germany “reached an agreement to allow completion of the $11 billion Nord Stream 2 pipeline [in Russia].” The outlet noted that the unease around the pipeline that will pump Russian gas directly into Germany “stems from Moscow’s history of using the energy sector to gain leverage over Russia’s neighbors, namely Ukraine.”

When finished, the pipeline will reportedly span 764 miles from Russia to Germany, “making it one of the longest offshore gas pipelines in the world.” In another world, such a move by Biden would have been politically disastrous given that he nuked the Keystone XL Pipeline earlier in the year and canceled thousands of U.S. jobs. Here’s the kicker: ABC World News Tonight, CBS Evening News and NBC Nightly News all ignored the story during their July 21 and July 22 broadcasts.

So much for Biden and the media’s conniptions about the Keystone XL Pipeline and climate change. Those concerns clearly don’t apply when it comes to promoting Russian energy. Remember when White House Press Secretary Jen Psaki claimed in May that “we’re hardly letting any country or other countries build Nord Stream 2?” Biden’s executive order canceling the Keystone XL ironically claimed that it “would undermine U.S. climate leadership by undercutting the credibility and influence of the United States in urging other countries to take ambitious climate action.” The Big Three networks didn’t seem to want to give the insulting hypocrisy of the Biden administration on the Keystone XL Pipeline any airtime.

The fact that Nightly News ignored the story is revealing. NBC News Chief Foreign Correspondent Andrea Mitchell had just praised Biden in April for “confronting the Russian leader, unlike Donald Trump.” What a joke.

The Big Three networks appear to have done whatever they could to bury the Nord Stream 2 pipeline story. All three ignored covering a May 18 Axios scoop revealing that Biden was lifting the sanctions on Russia barring it from completing the pipeline. Instead, the Big Three decried that Biden wasn’t doing more to stop Israel from bombing their friends in Hamas.

Remember when the media were obsessed with painting Trump as a lapdog for Russian President Vladimir Putin? Fox News anchor Bret Baier noted recently that Democrats and the media spent years “accusing President Trump of being a willing or unwilling agent of Russia.” Baier also said that “on policy the Biden administration seems to be much friendlier to Putin on a number of fronts.” [Emphasis added.]