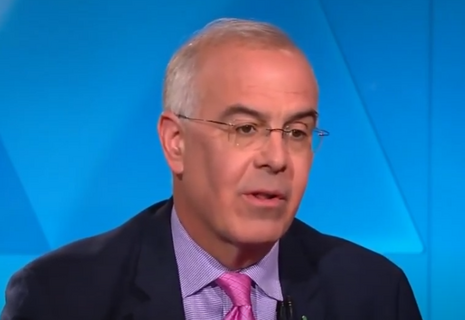 Brooks' new op-ed, headlined “This Is Why We Need to Spend $4 Trillion,” let readers know that he’s been in a “controlled fury.” His reasoning for the self-righteous anger was the sense of “indifference” amongst citizens to the “most consequential legislative package in a generation” during his recent travels across five states. Maybe it’s because Americans are not that gung-ho about sinking the country into a whirlpool of economic misery via out-of-control government spending?

But Brooks pleaded to readers to think differently (or nonsensically) about the destructive Democrat spending agenda: “These packages say to the struggling parents and the warehouse workers: I see you. Your work has dignity. You are paving your way. You are at the center of our national vision.”

In the words of former Washington Post economic columnist Steven Pearlstein, “Welcome, fellow Americans, to the era of the free lunch.”

Brooks actually invoked “ancestors” to whine about American “indifference” to socialist spending. “Have we given up on the idea that policy can change history?” He continued: “I can practically hear the spirits of our ancestors crying out — the ones who had a core faith that this would forever be the greatest nation on the planet, the New Jerusalem, the last best hope of earth.”  The spirits of our non-socialist ancestors.

But Brooks —  contradicting himself — actually conceded that in “normal times” he would argue that the leftist wish list items the Democrats were ramming through Congress were worthless. He even had the audacity to say he was worried about the debt:

In normal times I’d argue that many of the programs in these packages may be ineffective. I’m a lot more worried about debt than progressives seem to be. But we’re a nation enduring a national rupture, and the most violent parts of it may still be yet to come, [emphasis added].

Ah, so fear-mongering about “violent parts” about a self-described “national rupture” is sufficient excuse to be fiscally reckless with taxpayer dollars, eh Brooks?

But he flipped again later into fantasy economics. By convincing people that spending the country into oblivion is somehow benevolent, “this is how you fortify a compelling moral identity, which is what all of us need if we’re going to be able to look in the mirror with self-respect,” Brooks said. Perhaps only Brooks knows what he means by this. He concluded: “These packages, on the other hand, say: We support the choices you have made, in the places where you have chosen to live.”

CATO Director of Tax Policy Studies Chris Edwards noted that if both the $1 trillion infrastructure bill and $3.5 trillion reconciliation bill pass, “federal debt per U.S. household would rise from $179,000 today to $288,000 by 2031.” Brooks wasn’t kidding when he said he moved “left on economics” in 2020.

Conservatives are under attack. Contact The New York Times at 800-698-4637 and demand they stop protecting the left’s disastrous economic agenda.