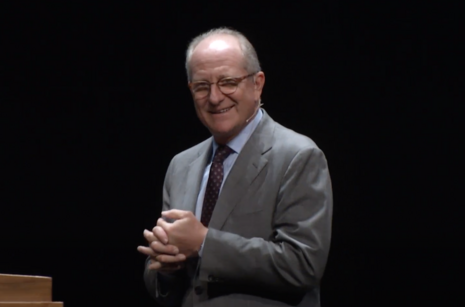 Pearlstein’s column, headlined “In Democrats’ progressive paradise, borrowing is free, spending pays for itself, and interest rates never rise,” was incredibly blunt: “Welcome, fellow Americans, to the era of the free lunch.” As Pearlstein told it, “To hear it from liberal economists, progressive activists and Democratic politicians, there is no longer any limit to how much money government can borrow and spend and print.”

Pearlstein said it was “disappointing” that Democrats embraced “intellectual dishonesty” and the “same all-or-nothing strategy” that he claimed Republicans were guilty of. “But,” said Pearlstein, “what is equally disappointing is the performance [of] my colleagues in the media.” He continued: “Rare is the story these days that does not highlight how ‘progressives’ feel about an issue, with nary a mention of what moderates or business leaders have to say."

Pearlstein’s satirical summarization of the economic thinking of progressives in today’s politics and media was spot-on:

So party on, progressive dudes. Worries about debt and inflation are just so 20th-century, the figments of a now-discredited neoliberal imagination. We have entered a magical world where borrowing is costless, spending pays for itself, stocks only rise and the dollar never falls. In this economic paradise, government mandarins can fine-tune the economy to prevent inflation and unemployment, while economic, racial, environmental and social justice can be achieved without any painful trade-offs.

Pearlstein went after a number of wild economic ideas pushed by the media and leftists alike. These ideas included raising the national minimum wage to $15 an hour and President Joe Biden’s absurd $1.9 trillion stimulus package. Pearlstein specifically called the $15 minimum wage proposal “nothing more than a stretch goal chosen by grass-roots labor organizers.” Pearlstein said much of what people have been sold on these progressive policies have been “mindless talking points:”

[W]hat we have been treated to instead are mindless talking points (‘Go Big’) politically inspired lines in the sand ($1.9 trillion in stimulus, a $15-an-hour minimum wage, $1,400 rebates) and transparently partisan proposals to reward the Democratic base, buy off White working-class voters and avenge the partisan outrages of the Trump era.

But that’s not all the craziness Pearlsteain tore apart. Pearlstein wrote, “[W]hen was it decided that every economic issue or business practice is best viewed through the lens of race and gender?” In another section, Pearlstein slammed the notion that the government can “borrow and spend an extra $10 trillion on covid relief, infrastructure and climate investments without running a serious risk of overheating the economy.”  [Emphasis added.]

Pearlstein wasn’t finished. He also excoriated how “All this borrowing and money-printing also risks triggering a run on the dollar and demands from foreign investors for higher interest payments on the $1 trillion they lend us each year just to maintain our current standard of living.”

Pearlstein suggested that he would be “the first to admit that because of new technology and structural changes to the global economy, aspects of our economic understanding need to be updated.” However, “those overdue correctives have been hijacked by partisans and ideologues who would have us believe that the laws of economics have been repealed,” Pearlstein said.  [Emphasis added.]

Conservatives are under attack. Contact The Washington Post at 202-334-6000 and hold it to account for its disastrous advocacy on behalf of the Biden administration’s $1.9 trillion COVID stimulus package.