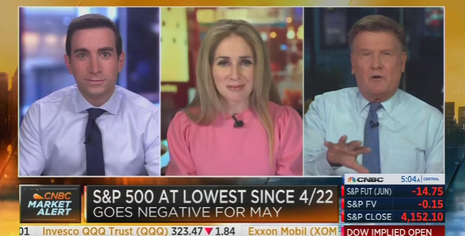 A new report on rising consumer prices might increase Kernen’s warnings about a repeat of the 1970s economy. The decade was characterized by “slow growth along with rapidly rising prices.”

CNBC covered yesterday’s wild stock selloff and rising commodity prices prior to the release of the highly expected Consumer Price Index (CPI) data. Kernen didn’t hold back about what the rising prices indicated for the economy. Kernen’s position was bolstered by new military conflict in the Middle East and rising crime in New York City. Kernen stated: “This is the [1970s] déjà vu I’m having.” He specified his comparison: “Crime in New York City, the Middle East, gas lines — um — inflation. I mean, all these things are happening again. The only thing we don’t have are hostages in Iran. And taxes going up.” In Kernen’s estimation, “I don’t know, I’m having like this horrible déjà vu from what happened in the 70s.”

Kernen’s “déjà vu” was reinforced by a new CNBC story on the CPI data that was released after the segment. The story revealed that “[i]nflation accelerated at its fastest pace since 2008 last month.” Specifically, the report showed the CPI “spiking 4.2% from a year ago, compared to the Dow Jones estimate for a 3.6% increase.”

In a shocking twist, Kernen warned about the lack of a Ronald Reagan-like president who would clean up his predecessor Jimmy Carter’s economic mess:

And there’s no Reagan on the horizon that’s going to come in and fix all these things, Sorkin? You know what I’m saying? Who do we have that when this Carter redux presidency is over, who do we have that’s going to come in here and take the — you know — start a new bull market and — you know — all the things that were going on back then: the hyperinflation, the stagflation, the high-interest rates, all the things that could happen. Who’s going to save us? We don’t have anyone!