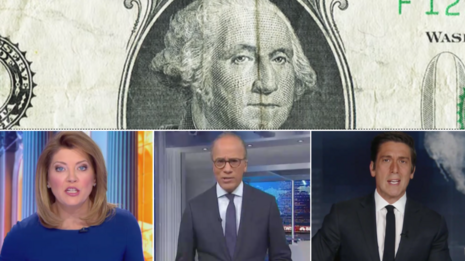 The ABC, CBS and NBC evening news shows continued to suffer from a chronic condition of ignorance to news that could damage President Joe Biden’s agenda to hike taxes.

The Business Roundtable (BRT) released a survey April 12 headlined, “Business Roundtable Survey Finds Corporate Tax Increases Would Weaken U.S. Business Expansion, Hiring, Investments in R&D and Innovation.” The survey of 178 CEOs conducted between March 8 and March 19 revealed very damaging news to Biden’s agenda: “98 percent of CEOs said that an increase in the corporate tax rate from 21 percent to 28 percent would have a ‘moderately’ to ‘very’ significant adverse effect on their company’s competitiveness.”

If that wasn’t bad enough, “71 percent said it would negatively affect their ability to hire, and nearly two-thirds said it would result in slower wage growth for U.S. workers.”

One glaring irony is that Amazon CEO Jeff Bezos is a member of the BRT. Bezos recently came out in support of Biden’s plans to hike the corporate tax rate. Amazon has a history of paying little to no federal income tax.

The Big Three continued a brazen pattern of hiding one of the Big Lies emanating from Biden that “there’s no evidence” that his tax hikes will be harmful to the U.S. economy. The 98 percent majority of CEOs surveyed by the BRT saying otherwise tells a different story.

‘Prior to the pandemic, the U.S. corporate tax rate drove economic growth, creating 6 million jobs, pushing the unemployment rate to a 50-year low and increasing middle class wages. From 2018 to 2019, major U.S. companies grew their R&D by 25 percent compared to the two years prior. The current U.S. corporate tax rate has also helped put U.S. businesses on a more level playing field with global competitors and encouraged businesses to invest and grow here in the United States.’

‘This survey tells us that increasing taxes on America’s largest employers would lead to a reduced ability to hire, slower wage growth for workers and reduced investments in research and development—all key components needed for a robust economic recovery.’