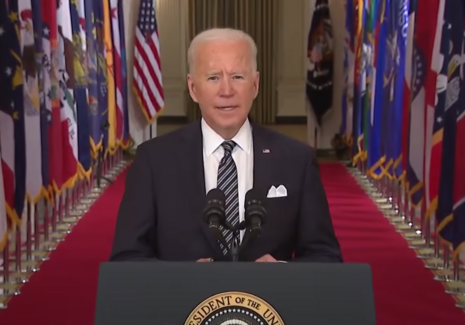 The taxpayer-funded National Public Radio (NPR) put its left-wing bent on full display when it did cheerleading for President Joe Biden’s $1.9 trillion economic equivalent of a sugar binge.

NPR chief economics correspondent Scott Horsley slapped an absurd headline on his latest piece: “Biden's $1.9 Trillion Rescue Plan Set To Turbocharge U.S. Economy.” Horsley, notorious for acting like a stenographer for former President Barack Obama, embraced his new pro-Biden schtick. He pivoted off the coronavirus vaccine rollout to quip how “[t]he U.S. economy is about to get a shot of its own.”

The Heritage Foundation saw it differently, however. In a recent report, the conservative think tank found that the “vast majority [of the stimulus package] will go to special interest payoffs and other wasteful spending that will do little to reduce the spread of COVID-19 or help the economy recover.”

Horsley showcased his propaganda when he said the gargantuan stimulus package “is expected to give a substantial boost to the world's largest economy once it's signed by President Biden.” Horsley gleamed about how the bill would be “putting more money in people's pockets just as an improving pandemic outlook opens new avenues for them to spend it.”

Horsley neglected to mention the recent Congressional Budget Office report that undercuts his argument. The CBO already said that the economy would quickly recover if “current laws governing federal taxes and spending (as of January 12) generally remain in place and that no significant additional emergency funding or aid is provided.”

Of course, Horsley also ignored mentioning that the bill, misleadingly dubbed the “COVID relief bill,” has “almost nothing to do with the coronavirus.” In fact, “less than 10 percent of the bill’s spending will be dedicated to public health,” The Heritage Foundation noted. Instead, much of the pork-laced bill “is stuffed with a wish list of progressive policies.”

Wasteful spending ignored by Horsely included the $350 billion in bailouts to state and local governments, “on top of the hundreds of billions already provided.” The Heritage Foundation said that “[t]his spending is completely unwarranted, as last year’s coronavirus relief measures have already given states windfall funding well in excess of their projected revenue shortfalls.”

But it gets worse:

[T]his round of bailouts will reward those states that enacted especially draconian lockdowns that wrecked their economies, closing businesses and pushing workers onto unemployment[.]

Of course, any clear criticism of Biden’s stimulus was buried in the 16th-20th paragraphs of Horsley’s story. The paragraphs mentioned concerns about inflationary pressures and excessive spending from Obama’s former National Economic Council Director Larry Summers.