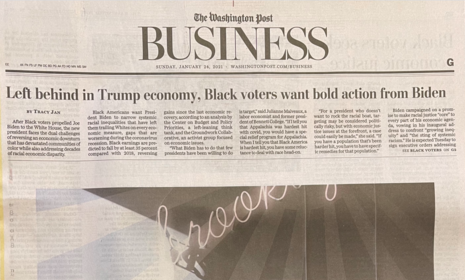 The Post’s story online was outrageously headlined, “The Trump economy left Black Americans behind. Here’s how they want Biden to narrow the gaps.” The print headline was even worse: “Left behind in Trump’s economy, Black voters want bold action from Biden.” Both were wrong.

The piece pivoted off of its incendiary anti-Trump bent to say “Black Americans” are now “counting on [President Joe Biden] to deliver on his promise to end systemic racism” in the American economy. The newspaper said that “Trump presided over the most unequal recession in modern American history because of his mismanagement of the coronavirus pandemic.” Economist and co-founder of the Center for Freedom and Prosperity Daniel Mitchell told the MRC that this piece by The Post was “a shockingly biased and intellectually dishonest story.” 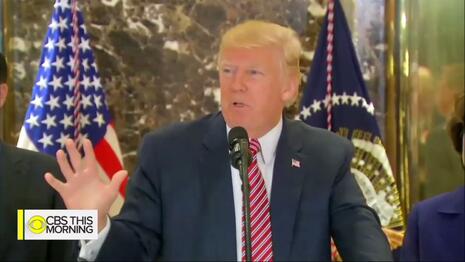 Mitchell proceeded to lampoon the shady logic that The Post used to make its claim about the Trump economy leaving minorities behind: “By all major indicators (household income, unemployment rate, and poverty), the all-time best economic year for African-Americans was in 2019,” under the Trump administration. Mitchell, who has been a Trump critic, pointed to a blog he wrote where he acknowledged that the Census Bureau’s 2019 report on U.S. income and poverty showed big median household income jumps for “all demographic groups.” The poverty rates for all demographics, as Mitchell noted, enjoyed “big improvements.”

Mitchell also said in a new blog criticizing The Post that “the recession was caused by the coronavirus, not by Trump’s policies.”

What’s fascinating is that The Post conceded the historically low 2019 unemployment rate for minorities. However, it dubiously brushed the unemployment rate off for racial reasons and credited former President Barack Obama instead:

Even the Black unemployment rate’s record low average of 6.1 percent over 2019 — a steady improvement that had begun during the Obama administration — remained double that of Whites.

The Post ignored mentioning anything in its more than 2000-word story about the historic rise in median household incomes for minorities in 2019 or the crashing poverty rates for those same demographics in the same year. In fact, the Census Bureau had reported in September, 2020 that “for Blacks, the poverty rate of 18.8% in 2019 was the lowest rate observed since poverty estimates were first produced for this group for 1959. The previous low for this group was 20.8% in 2018.” [Emphasis added.]

Mitchell said The Post not saying anything about the poverty rate or median household income for minorities in 2019 was a “shocking level of journalistic malpractice. Sort of like writing about the Cold War without ever mentioning the Soviet Union.” [Emphasis added.]

The Post did acknowledge that “Some Black Democrats gave Trump credit for further growing an already strong economy before the pandemic-induced recession.” However, the story quickly undercut its acknowledgment of Trump growing the economy by saying he refused to acknowledge and address the issue of racial wealth disparity and — wait for it — “systemic racism”:

CATO Director of Tax Policy Studies Chris Edwards and CATO’s R. Evan Scharf Chair for the Public Understanding of Economics Ryan Bourne lambasted the idea of using “wealth inequality” as a reliable measure for understanding the status of poor Americans.

Measures of wealth inequality do not tell us anything about the well‐​being of the poor, which is a more important focus for public policy than inequality. Poverty may fall as wealth inequality rises, such as when entrepreneurs build fortunes by generating economic growth ... [Wealth inequality] cannot be judged good or bad by itself because it may reflect either a growing economy that is lifting all boats or a shrinking economy caused by corruption.

Given the 2019 numbers by the Census Bureau that The Post ignored, it was clear that the economy under Trump had indeed lifted “all boats,” despite what The Post alleged. Mitchell concluded in his comments to the MRC:

It would be one thing to acknowledge this data and put forth competing hypotheses (maybe all that good news was a bubble, as I noted in my column), but the story instead ignores most of the relevant real-world data.

Conservatives are under attack. Contact The Washington Post at 202-334-6000 and demand it retract its claim that the Trump economy “left Black Americans behind.”