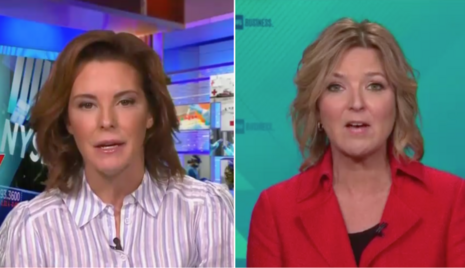 This is the strategy CNN and MSNBC used in an attempt to fool their viewers into thinking Democratic presidential nominee Joe Biden’s left-wing extremist economic plans are in any way, shape or form good for the U.S. economy.

CNN Newsroom and MSNBC Live With Stephanie Ruhle both pushed during their October 6 editions how Goldman Sachs Chief Economist Jan Hatzius reportedly told clients in a note that a Democratic sweep of the November elections would allegedly be good for the economy. MSNBC, in particular, also pushed how JPMorgan Chase was pushing a similar idea.

But here’s the problem: A conglomeration of individual employees and PACs of both Goldman Sachs and JPMorgan, have contributed overwhelmingly to Democrats this electoral cycle so far. Hatzius, in particular, has given funds to former President Barack Obama, which both MSNBC and CNN failed to disclose, along with the Democrat political donation trends of these banks. Biased much?

Open Secrets data show that for “all federal candidates” for the 2020 cycle as a combination of PAC and individual donations, JPMorgan has given $1,404,735 to Democrats against only $535,660 for Republicans. That’s a 72.39 percent to 27.61 percent disparity. Biden is listed as the top recipient, having already received $379,057 in individual contributions from JPMorgan employees.

Also, for “all federal candidates” as a combination of PAC and individual donations, Goldman Sachs has contributed $1,339,026 to Democrats and $805,182 for Republicans, a 62.45 percent to 37.55 percent disparity. Biden is also listed as the top recipient, having received $156,584 in individual contributions from Goldman Sachs employees.

CNN and MSNBC didn’t disclose any of this when carelessly running the narrative that Wall Street is looking forward to Democratic control of Washington. It’s possible that these banks would advocate for Democrats since they already have skin in the game this election cycle.

Insufferable NBC Senior Business Correspondent Stephanie Ruhle pushed how Wall Street was ”warming to the idea of a so-called blue wave under a Biden administration. Goldman Sachs Chief Economist [Jan Hatzius] now saying it would ‘likely result in substantially easier fiscal policy, a reduced risk of renewed trade escalation, and a firmer global growth outlook.’” She proceeded to cite “strategists over at JP Morgan say, a Biden win could be a positive for the stock market.” Ruhle claimed that “neither firm warning of big tax increases.” She didn’t disclose the political biases of either bank, or that of Hatzius.

CNN Chief Business Correspondent Christine Romans also propagandized Hatzius’s note and Goldman Sachs sentiments, albeit without mentioning the political biases of either: “With polls widening, Wall Street is growing more comfortable with the possibility of a Joe Biden win, and even a blue wave in November.” Romans continued: “Goldman acknowledges a blue wave would likely mean higher corporate taxes, but a Democratic sweep would mean easier U.S. fiscal policy and less risk of new trade tensions, good for investors.”

Conservatives are under attack. Contact CNN at 1-(404)-827-1500 and MSNBC Media Relations Senior Director Lorie Acio at lorie.acio@nbcuni.com and demand they disclose the political biases of their sources.