The effort attempted to insulate one of the president’s biggest liberal critics on the matter from conservative scrutiny: billionaire Microsoft Co-Founder Bill Gates.

The Times piece published Apr. 17 and headlined, “Bill Gates, at Odds With Trump on Virus, Becomes a Right-Wing Target,” grumbled Gates “has effectively assumed the role occupied by George Soros, the billionaire financier and Democratic donor who has been a villain for the right.” NPR reported that the U.S. had pledged $656 million to the W.H.O. for the “two-year budget cycle of 2018 and 2019,” which is less than 1 percent of Gates’s estimated net worth. 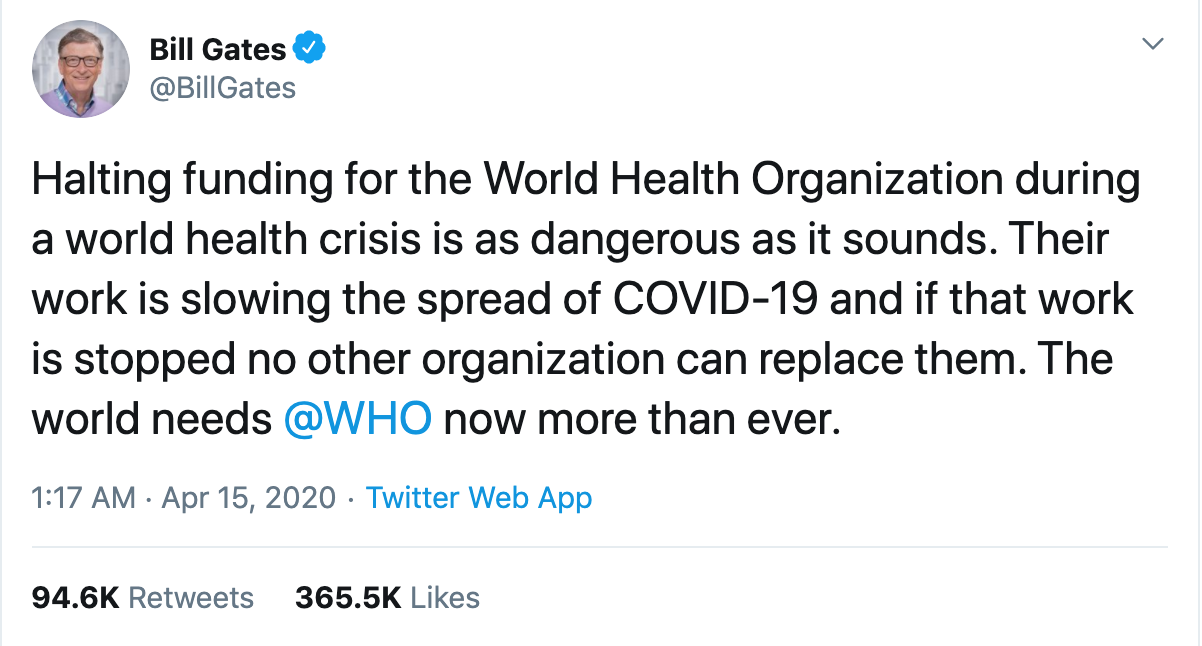 The Times piece spent the first seven paragraphs pushing red herrings to make it appear Gates is under an “explosion of conspiracy theories.” The Times said these theories were being peddled by “[a]nti-vaccinators, members of the conspiracy group QAnon and right-wing pundits” before pivoting to Gates’s half-baked shot at the White House. The paper claimed “Misinformation about Mr. Gates is now the most widespread of all coronavirus falsehoods,” according to its summary of media analysis taken from the company Zignal Labs.

The paper first propped up Gates as “the latest” to “be ensnared in the flow of right-wing punditry that has denigrated those who appear at odds with Mr. Trump on the virus.” It then proceeded to boast about the Bill & Melinda Gates Foundation’s philanthropic efforts.

Those efforts included distributing “vaccines in developing countries” and advocating “family planning through greater use of contraceptives.” The Times used the list to claim that “those efforts have prompted unfounded accusations that Mr. Gates was hurting the world’s poor with unnecessary drugs and harmful crops while trying to suppress the global population.”

The Times ignored that the Bill & Melinda Gates Foundation had funneled at least $11,381,171 to the over-population-focused Population Council between 2018-2020 alone. It has also given at least $81,009,329 to abortion giant Planned Parenthood and its affiliates from 2009 and before to 2018.

The other piece “Urged On by Conservatives and His Own Advisers, Trump Targeted the W.H.O.” was plastered on the front page of The Times Apr. 16, print edition. It blamed Trump’s W.H.O. decision on “a concerted conservative campaign against the group.” It arbitrarily attacked Fox News, Republican lawmakers and former Trump strategist Stephen K. Bannon as part of the effort.

[I]nside the West Wing, the president found little resistance among the China skeptics in his administration for lashing out at the W.H.O. and essentially trying to shift the blame for his own failure to aggressively confront the spread of the virus by accusing the world’s premier global health group of covering up for the country where it started.

The Times buried legitimate criticism of the W.H.O.’s antics in the tenth and fifteenth paragraphs:

They [The White House] cited a Twitter post by the W.H.O. on Jan. 14 saying that the Chinese government had 'found no clear evidence of human-to-human transmission of the novel #coronavirus' as evidence that the W.H.O. was covering up for China.

But global health officials and political leaders — not just Mr. Trump — have said the organization was too willing to accept information supplied by China, which still has not provided accurate numbers on how many people were infected and died during the initial outbreak in the country.