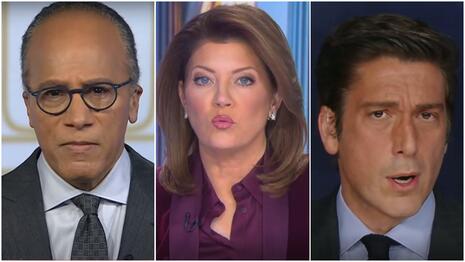 Bloomberg News reported on Monday that “[t]he stock market has never been down this much 16 trading days into a year.” The shocking drop of 11 percent was “the most on record at this juncture, according to Bloomberg data that goes back over nine decades.”

This is scary news for Americans already gravely concerned about job numbers and inflation, but apparently it was no big deal to the Big Three nightly news networks. NBC, CBS, and ABC downplayed the news on Monday night and almost completely ignored it on Tuesday evening.

NBC and CBS spun the stock fall as a “stunning comeback,” and ABC changed just one word in their talking points, calling it a “stunning rebound.”

Fears about Ukraine and inflation sent the stock market plunging for a while today, the Dow dropping more than 1,000 points. But then, look at this, a stunning comeback, actually closing up almost 100 points. But the ride may not be over. [Emphasis added].

CBS’s Norah O'Donnell hurled a virtually identical reaction on Monday night, at first claiming that it was “a wild day on Wall Street – the stunning comeback after the Dow dropped 1,000 points.”

To the economy tonight, and a wild day of trading for the market. The Dow plunging more than 1,000 points at one point over concerns over inflation, possible interest rate hikes, and Ukraine. The Dow then making a stunning rebound just before the closing bell late today, finishing up 99 points after all, closing at 34,364.

That’s it. Muir gave less than 20 seconds of coverage on the “[w]orst-ever start” the S&P 500 has experienced. He covered a feel-good story on a good Samaritan UPS driver for almost two minutes — roughly 10 times longer than the economic news. CBS and NBC also gave strikingly similar explanations for the more than 1,000-point drop.

O’Donnell doubled-down on the spin:

Well, it was a roller-coaster ride of a day in the stock market. Fears over what’s going on in Ukraine along with questions over the Federal Reserve’s plan to curve inflation sent stocks into a free fall with the Dow down more than 1,000 points by just after noon. But after a late-day rally, all three indexes closed up in positive territory.

Driving the volatility, concern about a potential Russian invasion of Ukraine and the global economic fallout, while at home corporate earnings are coming in, as inflation hits forty-year highs, driving prices higher from the grocery aisles to car lots. [Emphasis added].

Tuesday night’s coverage was even worse. CBS and NBC totally omitted coverage of the stock drop and instead covered Tom Brady’s retirement and a message in a bottle discovered in Ireland. ABC covered the “wild swings on Wall Street” for just over a minute.

The Dow again dropped “800 points at its session low” on Tuesday.