Randy Hall
With the coronavirus outbreak still dominating news across the nation, one conservative school is fighting back against claims from the New York Times that the university irresponsibly brought students back to Lynchburg, Virginia, before they “started getting sick.” “Enough is enough,” Liberty University President Jerry Falwell Jr. stated when referring to the “fake… Nicholas Fondacaro
The liberal broadcast networks did all they could to smear gun rights advocates who gathered in Virginia’s capital last month. They framed the advocates as terrorists, white supremacists, and generally violent. When they were proven wrong, they still invoked images of violence and lied about violence occurring. But on Monday, the hard work of those advocates paid off when an assault weapons…

Curtis Houck
After a peaceful Monday rally by Second Amendment activists in Richmond, Virginia, CNN and MSNBC deserved thoughts and prayers seeing as how their fear-mongering about “violence” a la Charlottesville by “thousands” of “heavily armed” “guns rights activists, white nationalists, militia groups swarming” the Capitol fizzed into puddles of lies. Kristine Marsh
All three networks were eager to equate gun rights advocates to neo-Nazis on Monday morning’s broadcasts. While tens of thousands of people are expected to arrive at Virginia’s Capitol building this afternoon to protest the state’s proposed anti-gun laws, reporters from ABC, NBC and CBS tried to compare the Second Amendment rally to the much smaller rally in Charlottesville in… Kyle Drennen
On Thursday and Friday, all three broadcast networks eagerly joined Virginia Democrats in attempting to smear gun rights advocates in the commonwealth as violent, racist terrorists who were plotting “a rerun of the deadly Charlottesville protests.” Reporters seized on Governor Ralph Northam declaring a “state of emergency” ahead of a pro-Second Amendment rally at the… 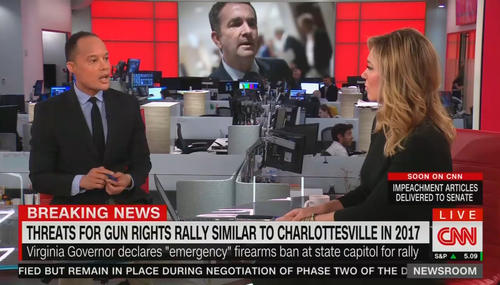 Walter E. Williams
Virginia Governor Ralph Northam apologized for his medical school blackface stunt, but he will have much more to apologize for if he signs into law a bill that attacks Virginia citizens' Second Amendment rights. The measure is Senate Bill 16, which would ban “assault” firearms and certain firearm magazines. Since Democrats have seized control of Virginia's General Assembly,… Randy Hall
Earlier this year, Virginia was rocked by scandals involving the top two Democratic officials in the state. First was Governor Ralph Northam, who was criticized for appearing in blackface in an old yearbook, and soon after, Lieutenant Governor Justin Fairfax faced accusations of sexual assault. While the controversies have not resulted in either Democrat stepping down, Fairfax brought the… Kyle Drennen
In an effort to exploit Friday’s tragic shooting at a Virginia Beach municipal building that killed 12 people, Virginia Democratic Governor Ralph Northam called on the state legislature to pass new gun restrictions. On Tuesday, MSNBC naturally brought him on for an interview to help push the issue, though anchor Kasie Hunt admitted it would be a challenge given his recent scandals. 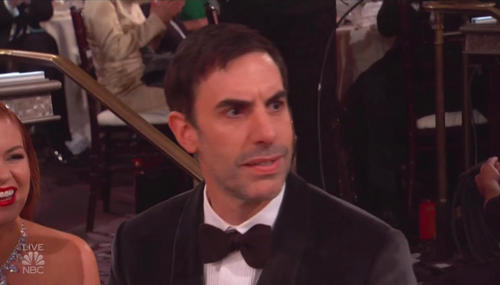 Culture
Alexa Moutevelis
How dark are things in Trump’s America? So bad that left-wing comedian Sacha Baron Cohen told Variety, “[W]e are past that point” where politics is no longer funny and “there is a danger” to not taking things seriously. “I think you need people to remain repulsed,” he said, urging them to keep up “their passion, and bring it to the voting booth.… Curtis Houck
Tuesday afternoon on CNN, Inside Politics and CNN Right Now compared conservatives and Republicans nationwide seeking to advance pro-life legislation to the scandal-ridden Virginia Governor Ralph Northam (D) after he made his comments endorsing infanticide. Their rationale? Well, in both cases, those two sides found themselves “on the defensive.” Yes, really. Curtis Houck
During an interview on Friday’s New Day with Republican National Committee chairwoman Ronna McDaniel, CNN co-host Alisyn Camerota falsely claimed that Democrats support extreme, late-term abortions so close to a woman’s due date, including comments by Virginia Governor Ralph Northam (D) that have been seen by many as promoting infanticide.