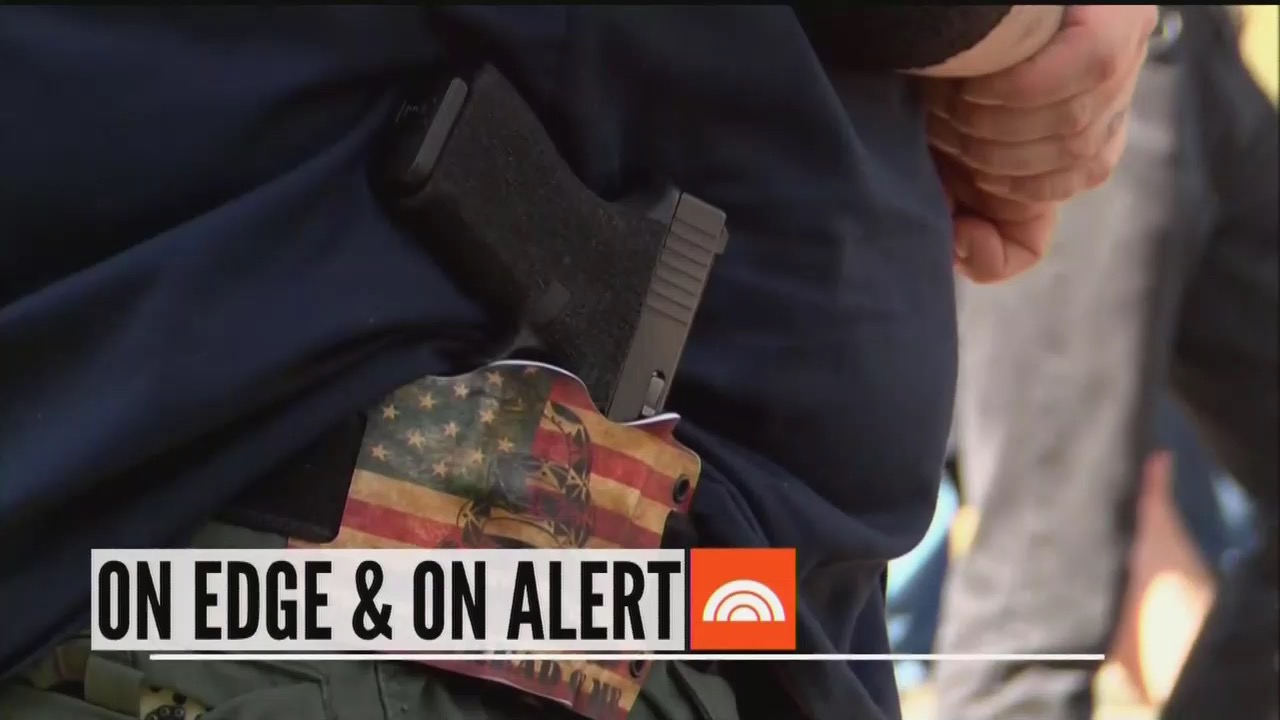 All three networks were eager to equate gun rights advocates to neo-Nazis on Monday morning’s broadcasts. While tens of thousands of people are expected to arrive at Virginia’s Capitol building today to protest the state’s proposed anti-gun laws, reporters from ABC, NBC and CBS tried to compare the Second Amendment rally to the much, much smaller rally in Charlottesville in 2017 attended by white nationalists that resulted in violence and one person being killed.

NBC’s Today show had the shortest report but the most comparisons to Charlottesville. Co-anchor Craig Melvin teased the event as fraught with violence, because three neo-Nazis, who were arrested this week, had allegedly planned to attend the event:

"On edge and on alert. Police in Virginia bracing for a massive crowd at a gun rights rally today amid fears it will attract white supremacists and turn violent. This morning what officials are doing to avoid another Charlottesville."

“Police are bracing for a pro-gun rally that they fear could turn violent after what authorities say had been credible threats by white supremacists,” he fretted. Gutierrez referenced Charlottesville again and touted Democrats “not taking any chances” by banning weapons inside the Capitol building. The correspondent worried the rally was going to “attract white supremacists and anti-government extremists.”

CBS This Morning offered interviews from both sides but still spent time absurdly comparing this rally to Charlottesville. Correspondent David Begnaud again hyped a handful of extremists as somehow comparable to these gun advocates:

Ahead of this event, seven members of the white nationalist group called the base which advocates for a race war to create a white ethno state were arrested across the country. Authorities say some of those people were expected to attend today's rally. State officials say they want to avoid another Charlottesville with a neo-nazi rally in 2017 ended in the death of a counter protester.

ABC’s Good Morning America had the shortest report but still managed to smear gun rights advocates by lumping them in with fringe white nationalists.

Co-anchor T.J. Holmes teased his upcoming report with this menacing description: “Richmond, Virginia on high alert this morning bracing for violence as thousands descend for a gun rights rally.” Correspondent Victor Oquendo hyped how  Democrat Governor Ralph Northam had declared a state of emergency and banned weapons ahead of the event. Holmes jumped to make the Charlottesville comparison:

“No doubt, officials have learned from security lessons from Charlottesville in 2017,” he touted.

With all the worrying about gun rights rallygoers being white supremacists, the media has no problem with these gun laws being backed by Virginia’s Democrat Governor Ralph Northam, who had his own race scandal last year, after a yearbook photo surfaced of him dressed as a klansman or in blackface. Just as the media tried to cover for him then, all three networks this morning conveniently ignored the many signs rallygoers brought mocking Northam and his racial scandal:

Some of the protest signs at the Virginia Gun Rights Rally pic.twitter.com/9XyJ4G6vLa

The media has a bad habit of glorifying liberal protests while smearing conservative ones as violent signs of a coming civil war.

Read the full transcripts from this morning’s ABC, NBC and CBS’s broadcasts below:

Tease: Richmond, Virginia on high alert this morning bracing for violence as thousands descend for a gun rights rally.

TJ HOLMES: We need to head to Virginia where there's high alert this morning. Thousands of people are expected to attend a gun rights rally in Richmond minus the guns. The government is declaring a state of emergency there which temporarily bans firearms and is citing credible threats of violence. Victor Oquendo is on the scene for us. Good morning to you, Victor.

VICTOR OQUENDO: Good morning, T.J. Things are really starting to pick up now. This line stretches all the way down the block. A lot of people have been here for more than two hours leading up to the one entrance here at the state capitol. Doors open up at 7:00. Everyone who goes inside will be screened. We are expecting thousands of gun rights protesters along with members of some extreme militias, they could be here as well, protesting some new gun legislation.

Local, state and federal law enforcements all involved. Ahead of this rally, seven alleged white supremacists with ties to the neo-nazi group the base have been arrested. Authorities saying that at least three of them were planning on attending. The governor declaring a state of emergency and banning all weapons from capitol grounds. Now you can see this list of prohibited items, right at the top, firearms. While none of these are admitted, beyond the fence right outside where we're standing, all of those items are allowed. T.J.?

HOLMES: No doubt, officials have learned from security lessons from charlottesville in 2017.

OQUENDO: Absolutely, T.J. So we're looking at a much bigger police presence, tighter

Perimeter, communication between all agencies. Should be much better this time around, and that weapons ban is in place, T.J.

TONY DOKOUPILl: Richmond, Virginia is on high alert this morning before a gun rights rally that local authorities fear could turn violent. The FBI and local law enforcement say they have received credible threats of violence. Organizers say tens of thousands of people including white supremacist groups and militias may gather in the former confederate capital today where Democrats are proposing new gun laws. CBS This Morning lead national correspondent David Begnaud is in Richmond for us. David Good morning. Set the scene for us. this morning.

DAVID BEGNAUD: Good morning. I would say there's about 1,000 people already lined up along the perimeter of the capitol. Many of them are wearing stickers that say ‘guns save lives.’ Across the street a big banner with a picture of an assault rifle ‘come and take it’ is what it says. As we walk the line here, there are actually people who have brought with them in the corner, we’ve seen several people who have their weapons with them. You can have weapons outside the capitol, you just can't bring them inside because of an executive order that the governor instituted. There's a sign I want to show you that just went up of prohibited items, along with firearms, knives, sling shots, metal knuckles, blackjacks, all the way down pocket knives are permitted if they’re less than three inches. Everybody has to go through metal detectors. The gates just opened. And tens of thousands of people are expected.

PROTESTOR: I will not compromise on the Second Amendment. [ Applause ]

BEGNAUD:: Members of Virginia's citizens defense league which organizes the annual gun rights rally insist that their message is solely to protect the Second Amendment. Philip van cleave is the organization's president.

BEGNAUD TO CLEEVE: What are you against?

BEGNAUD: Ahead of this event, seven members of the white nationalist group called the base which advocates for a race war to create a white ethno state were arrested across the country. Authorities say some of those people were expected to attend today's rally. State officials say they want to avoid another Charlottesville with a neo-nazi rally in 2017 ended in the death of a counter protester.

MICHELLE WHARTON: We have the right to bear our arms.

WHARTON: Our fears that the skinheads and neo-nazi groups, you know, white supremacists are going to come in here--

BEGNAUD: Tensions have been rising since Democrats regained control of the state legislature and propose several gun control bills including limiting handgun purchases and requiring background checks. It all comes after a mass shooting in Virginia Beach that happened last Summer killing 12 people. An anti-gun rally was also planned for today but that was cancelled by organizers. Andrew Goddard became a gun safety lobbyist after his son survived the 2007 Virginia Tech shooting.

ANDREW GODDARD: Why would you take a gun violence survivor or their family into an area where there's a state of emergency has been declared?

MCCORD: The difficulty we have in situations like this is to be able to balance the protection of public safety with the preservation of first amendment rights. It's a blow to the First Amendment that gun safety advocates don't feel safe participating.

BEGNAUD: I have to tell you, though, from everything we're seeing this morning there's a large police presence, a building presence of people who want to participate but everything is very peaceful as of right now. By the way the FAA has actually banned drones from flying anywhere in this area out of a fear that he some of those drones may be weaponized. I got to tell you one deterrent might be the weather. It feels like 17 degrees out here. Very cold this morning.

GAYLE KING:Yeah but people are so committed and passionate on this. Let's hope it stays peaceful, David thank you very much.

TEASE: On edge and on alert. Police in Virginia bracing for a massive crowd at a gun rights rally today amid fears it will attract white supremacists and turn violent. This morning what officials are doing to avoid another charlottesville.

CRAIG MELVIN: Let's turn to the state of emergency in Virginia's capital this morning. Police are bracing for a pro-gun rally that they fear could turn violent after what authorities say had been credible threats by white supremacists. NBC’s Gabe Gutierrez joins us from Richmond. Gabe, good morning.

GABE GUTIERREZ: Craig, good morning. people already lining up here, even though this rally is several hours away. Now Virginia authorities took a lot of heat after Charlottesville for letting that rally spiral out of control several years ago. This time they are not taking any chances. They have banned firearms and knives here and they’ve set up a perimeter around the state capitol hoping to prevent any violence. This morning Richmond is bracing for a huge gun rights rally at the Virginia state Capitol. The event was initially planned as a protest against new proposed gun legislation, but it's now expected to attract white supremacists and anti-government extremists.

RALPH NORTHAM: Hate, intimidation, and violence have no place here.

GUTIERREZ: Virginia's governor Ralph Northam declared a state of emergency and issued a temporary ban on all weapons in the area hoping to avoid a repeat of the deadly protest in charlottesville in 2017. The FBI is also on alert. Friday four suspected neo-nazis were arrested connected to a group that calls itself the base. The English translation of Al Qaeda. The day before three other members of the same group arrested. Officials say they discussed attending the rally in Richmond. But organizers insist that the event will be peaceful, meant to protest bills limiting gun rights, proposed by the Democrat-controlled state legislature. The proposals come after a mass shooting in Virginia Beach last May involve a disgruntled city employee who killed 12 people in a municipal building.

PHILIP VAN CLEAVE, VIRGINIA CITIZENS DEFENSE LEAGUE: It's a war on people like me and other law abiding gun owners. We’re tired of this stuff

UNIDENTIFIED MAN: I respect the fact that they have the right to own a shotgun, but there needs to be some kind of reasonable limitations.

GUTIERREZ: President Trump weighing in. Your second amendment is under very serious attack. That's what happens when you vote for Democrats. They will take your guns away.

RABBI MICHAEL KNOPF: Charlottesville was terrifying and a wake-up call.

GUTIERREZ: Rabbi Michael Knopf is among those hoping this rally does not bring violence.

KNOPF: It's terrifying and saddening but in some sense, not surprising because we have seen a rise in all of those forms of hatred.

GUTIERREZ: This is lobby day here at the state capital. It happens every year on Martin Luther King day. But obviously there is a much bigger security presence today. A gun safety group that had planned its own demonstration today has canceled it citing a credible threat to public safety. Craig?