The usually even-keeled NBC News Trump correspondent Katy Tur seemed to have had enough on Thursday night as following the Republican presidential debate, Tur took to MSNBC to air a multitude of concerns about the growing number of violent incidents at Trump rallies to go along with Tuesday’s alleged bruising of Breitbart’s Michelle Fields by Trump campaign manager Corey Lewandowski.

Did Ted Cruz do a good job mixing it up with Donald Trump tonight? If Chris Matthews's reaction is any indication, you'd have to say yes. The Texas senator, he sneered, was "Joe McCarthy at his worst" in his exchange with Trump in which he challenged the New York real-estate developer to release an off-the-record chat with the New York Times in which he allegedly admitted that his tough rhetoric on immigration was all a ruse.

Hey Chris Matthews: is GloZell qualified to be President of the United States? How about John Travolta or Joy Behar?

On his MSNBC show this evening, Matthews attacked Sarah Palin's legitimacy as a Trump endorser by questioning her presidential qualifications. GloZell, Travolta and Behar are all Hillary endorsers. So how about it Chris: which of them could you imagine in the Oval Office? Trump advocate and former Apprentice star Omarosa Manigault demolished Matthews' absurd attack, saying she was supporting The Donald for president, not Palin or anyone else.

VIDEO Matthews Baffled By Cruz Hit on NYC; He’s Like ‘The Music Man’ Playing to ‘Hicks’ in Iowa

Multiple times throughout the two hours of post-GOP debate edition of MSNBC’s Hardball late Thursday and early Friday, Chris Matthews expressed confusion at Ted Cruz’s attack on Donald Trump and “New York values” by wondering if it’s like accusing all San Francisco Democrats of being gay or playing Harold Hill in The Music Man by “playing to the hicks” in Iowa. 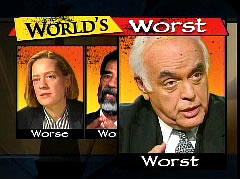 Even though conservative columnist Robert Novak was talked about and attacked many times on MSNBC's Countdown show -- especially as host Keith Olbermann frequently devoted time to the Valerie Plame case -- the MSNBC host did not take time this week to report on Novak's passing. In fact, even though he reported on Novak's hit-and-run car accident last year just before Novak's brain cancer diagnosis and portrayed him negatively, Olbermann never revisited the story to inform viewers that his illness was the likely cause of the conservative columnist's erratic behavior.

And when Olbermann launched his Countdown show's regular "Worst Person in the World" segment on June 30, 2005, the very first recipient of the number one "Worst Person" dishonor was Novak, because of his role in the Valerie Plame leak case, even though the story at that point was two years old. Olbermann: "We still know what you did last summer. Well, summer before last summer." His dislike of Novak was so great, that Olbermann even included him again in the next night's "Worst Person" segment -- in the number two position -- calling him a "holdover."